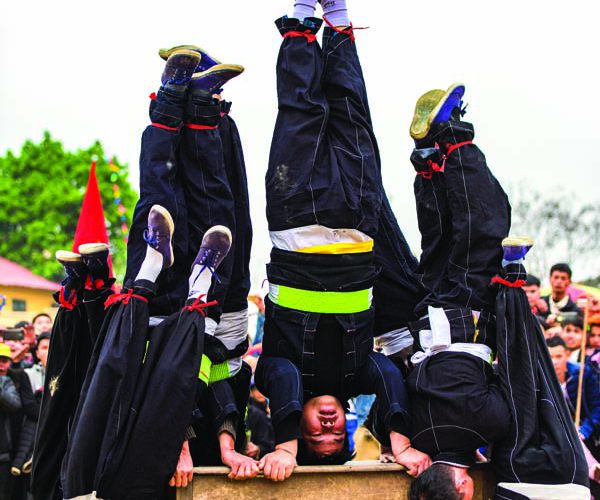 The spring lion dance of the Nung Phan Slinh people

Nung Phan Slinh is a local subgroup of the Nung ethnic minority, mostly concentrating in the provinces of Lang Son, Cao Bang and Thai Nguyen. The Nung Phan Slinh culture is age old-and-rich. The lion dance is just one bright spot in this colorful kaleidoscope.

Camouflaged as a lion, the dancer makes quick, vigorous and skillful moves extracted from traditional martial arts. These are the typical characteristics of the dance. The dancing lion may also be accompanied by a gorilla and a monkey.
Nung Phan Slinh lion dance shows are usually performed during rituals at shrines, or during New Year’s and other festive occasions to evoke the spirit of unity and boost the air of exultance in the community. The dance also expresses the noble militarism, bravery and the values that the Nung Phan Slinh people utilized in the process of surviving and becoming one with nature.
The lion dance is especially lively, gay and flamboyant during the long tong (getting down to the fields) festival that usually takes place somewhere between the 4th and 25th of the first lunar month after the New Year to pray to heaven and the deities, asking for favorable weather, good crops and abundance.
In every long tong festival, usually five lion dances are performed, each with its own meaning, purpose and unique characteristics.
Greeting partner lion dance: When the guest lion arrives, the two lions make acquaintances with a boisterous dance under overwhelming beats of drums and gongs. The two lions are actually sparring, trying to outwit and bring their opponent down. Both the dancers must be highly skillful in martial arts in order not to be defeated. Sometimes, both of them bend down so low as if ready to throw one another over. Having finished the dance and kowtowed to the tutelary god, the lions walk around to greet the spectators, their gait showing strength and flexibility
Greeting the deities dance: This is a must-do in all lion dance shows. As the drums and gongs begin to play, all the participating lions come out to dance. They begin by holding their head high, making circles with their hands, and then oscillating their head to the left, to the right, or forward, flashing bright colors beautifully. This dance normally lasts about 30 minutes.
Festive dances: Two lions dance and push one another with a knee at the same time. If one of them steps back, falls or its knee is off the target, it loses. The sparring between two lions may sometimes last more than 5 rounds without anyone winning. To win, one must have great skills and stamina.
After the lions have danced for an hour, the gorillas join the show. They use branches to scare the lions, chase and mount them, kick and punch them. The lions get angry and fight back. The appearance of the gorillas changes the dynamics of the dance and diversifies the fun. The interaction between them and the lions makes the spectators laugh heartily. A while later, monkeys arrive on the scene. There are usually two monkeys per lion. The gorillas and monkeys join forces to harass and beat the lions. In return, the lion makes aggressive moves such as springing up and snatching them, and the gorillas and monkeys show agility by evading and striking back. All participating artists must have enduring stamina and great martial skills to make the show look real and attractive. That is exactly the element that attracts most of the spectators.
Giving birth to lion cubs dance: Lions caress one another and make symbolic mating movements. Then a little lion climbs into the mother lion’s womb. Now the mother lion looks heavy and very cautious with every movement. Then they dance the act of giving birth to a cub, and the mother lion teaches the cub every move of the dance. The mother shows caring tenderness, while the cub shows fragility at first, but grows stronger and stronger. At last, the two of them dance gracefully in unison to show that the cub is growing mature.
The lion hunt dance: A man armed with a short machete, the gorillas and monkeys attack the lion under rapid drum rolls. The lion runs agilely and evades the attacks, but it cannot run forever. The hunter, gorillas and monkeys finally drive the lion into a snare, cut off its head and celebrate the victory. The lion hunt dance demonstrates the power of the Nung Phan Slinh people to conquer nature.