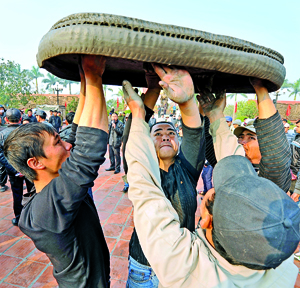 The sounds of liberty

Villagers recreate the noises made by mortars that aided their ancestors

Legend has it that in 1288, during a battle between the Tran Kings’ army and the Yuan invaders, the elephant of Lord Tran Hung Dao got bogged down in the mud of Bach Dang River. Local people cast big, dry earth chunks in the river to help it escape. Since then, in their leisure time, people have re-enacted the elephant rescue scene, which gradually transformed into the Clay Mortar Contest.
Yet another legend says, as the Trung Ladies waged war against the Eastern Han occupiers in the 1st Century, they invented ‘mortars’ to create loud explosions to divert the enemy and to dilute the negative qi that caused illnesses. Since then, the armed forces and the civilians have held contests of making and throwing mortars, which over time became festivities.
Those are versions of the origins of the Clay Mortar Contests, which are still being conducted annually in many villages of Thai Binh, Hai Phong, Hai Duong provinces.
One of the most popular contests takes place on the 3rd of the 8th lunar month (22 September this year) in Tan Hung, Tam Da and Tan Lien Communes, Vinh Bao District of Hai Phong.
On the festive day, when everybody has gathered in a village square or a clearing, the contestants are divided into three or four-person teams. Each team receives about 30kg of clay taken from the riverbed.
The contestants make all possible efforts with their hands, feet or other tools to knead the clay.
The finished ‘mortar’, made in a few minutes, is just a tray-like disk of clay, rimmed by a clay ‘rope’. The thickness of the mortar disk must be proportionated to its diameter. The common feature is that they are all thick near the rim and thinner toward the centre.
At the drum roll, the teams take turns bringing their mortar disk into the stage to loud cheering. Each team has their strongest man lift the mortar with one hand while propping it at the centre. The mortar disk curves like a pan. The mortar man holds it at chest level and throws it forcefully forward. The rims land first, and the air inside the ‘pan’ explodes loudly, breaking the clay membrane and rims into flying pieces.
The loudest explosion and the furthest flying debris identify the winning team that has the highest skill of mortar making and throwing, and the strongest arm.