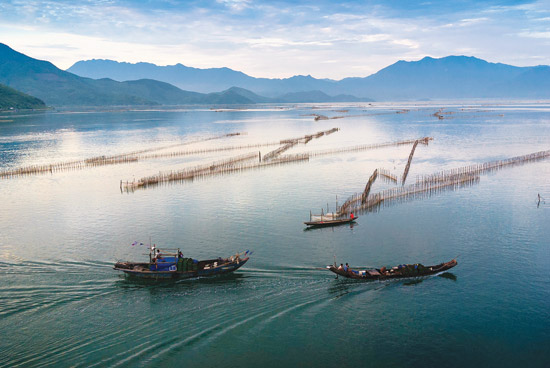 Rustic lagoon offers a taste of its storied past

During the era of Emperor Minh Mang, Tam Giang Lagoon went by the names Thien Hai, Hac Hai and Hat Hai, which means â€˜Shallow Oceanâ€™. The latter name really holds true for anyone whoâ€™s come here to greet the dawn or watch the sunset on the vast waters of undulating ripples, see the junks going upstream and downstream casting nets or view scenes of the lives of fishermen on the lagoon.
The Tam Giang-Cau Hai Lagoon system is considered one of the largest salt marshes in Southeast Asia. This is precisely the region that regulates the climate between two sandy areas, moderates the floods, and limits the danger of the delta getting waterlogged. Tam Giang-Cau Hai Lagoon functions to maintain the groundwater of the delta along the banks and the sandy regions along the seacoast. It maintains the peopleâ€™s daily source of water and is the place that restores the water quality before it flows out to sea.
Tam Giang Lagoon is freshwater during the flood season and brackish during the dry season. Because of this, the aquatic environment here is extremely plentiful; many aquatic and marine species live here. The lagoon is a source of precious resources for the fishermen who exploit it for their livelihood.
Tam Giang Lagoon was mentioned in Le Quy Donâ€™s â€˜Phu Bien Tap Lucâ€™ (â€˜Miscellaneous Records of Consoling [the People of] the Frontierâ€™). The Nguyen Dynastyâ€™s National History Agency also mentioned Tam Giang Lagoon in the â€˜Dai Nam Nhat Thong Chiâ€™ (Complete Gazetteer of Dai Nam), which primarily talked about the formation and hazardous wild features of the place. Among common folk, the people pass on the famous folk song, â€˜Loving you, I want to come, too/fearful of Ho Moor and fearful of Tam Giang Lagoon.â€™ At that time, Tam Giang Lagoon was a broad land area flooded in water, full of mud, and inundated with unpredictable hazardous winds and waves. Boats going back and forth easily encountered calamities. Tam Giang Lagoon was moreover a place where thieving bandits hid themselves.
Tam Giang-Cau Hai Lagoon is no longer desolate as in the past. In recent years, Thua Thien-Hue Province has invested in and developed the building up of the lagoon, as well as exploiting tourism.
A Hue friend told me that Tam Giang-Cau Hai Lagoon is becoming an attractive tourism site for visitors. The traffic routes from Hue City down to Tam Giang Lagoon are now quite favourable, so at the end of the day and week many people frequently come here to enjoy specialties.
Mr Dinh Tien Dungâ€™s Dam Chuon (Dragonfly) Diner is one of the countless eateries that lie on Tam Giang-Cau Hai Lagoon belonging to the Phu An Residential Zone of Phu Vang District in Thua Thien-Hue Province. The diner is made entirely out of bamboo and lies tottering on the waterâ€™s waves. The tables are low-set, while customers sit on mats or small cushions. The dishes here primarily consist of the shrimp and fish caught in the lagoon.
Customers who come here enjoy the dishes while viewing the cloudy skies or the boundless waves. Before enjoying nature products, they get to have none other than the owner invitingly pour into their cups â€˜tra trangâ€™ or â€˜white tea,â€™ which is a specialty distilled by the diner. A cup of Dam Chuon (Dragonfly Lagoon) liquor is refreshingly sweet and spreads throughout the bodyâ€”warm and rich but not jolting. All one needs is to start off with a cup of â€˜tra trangâ€™ and the atmosphere of the meal comes alive. To the side on the diner wall a guitar is always placed.

The dinerâ€™s owner related that he pioneered the diner on the lagoon a decade ago. The diner has remained simplistic and without alteration since its inception. Before engaging their meal, customers can have the owner show them how to cast small nets or look at bamboo traps with which he catches the fish and shrimp.
In order to get to the diner, customers have to take a boat from the lagoonâ€™s bank and meander past the bordering fences around shrimp and fish nurseries for about 15-20 minutes. Thatâ€™s sufficient time to take pictures of the scenery and activities on the lagoon. The eyeâ€™s purview of the surface of the lagoon seems endless and is interspersed by rows of jagged bamboo running up and down the lagoon. Every once in a while, narrow fish lookout towers appear, adorned with several altars draped in red cloth that lie precariously perched atop the bamboo stalks.
At present, there are ten Dam Chuon Diners. Some diners invest a billion dongs to build and decorate floating restaurants that hold up to a hundred customers. Mr Dungâ€™s grass diner only holds, at most, 20-30 customers at a time. Foreign tourists, too, frequently choose Mr Dungâ€™s diner to eat, drink, and take in the landscape.
*The Vietnamese version was printed on 29 November, 2014 on Nguoi Lao Dong website