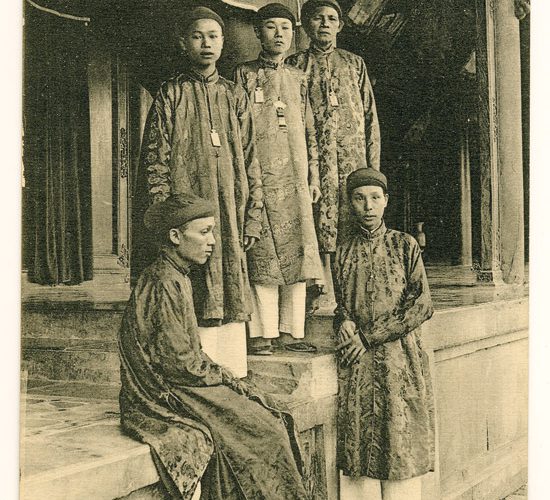 The safe sex and thier amorous duties

Today, in the rural village areas of Thua Thien Hue, people still recall the proverb: ‘As happy as a village in which a “sir hermaphrodite” is born.’ A ‘sir hermaphrodite’ refers to an androgynous male whose sexual organs are deficient and who exhibits both male and female attributes. When they grow to maturity, they are incapable of having sexual relations with women. In times past, any family to which a ‘sir hermaphrodite’ was born would report immediately to the village leaders so that they could report him to the Ministry of Rites. The Ministry of Rites then raised the child according to the rites of the Imperial Palace, so that when he reached maturity he could serve as a palace eunuch who attended to daily affairs inside the Forbidden Palace. Any village that gave birth to a ‘sir hermaphrodite’ was exempted from taxes for three years.

Eunuchs at Hue Citadel in the period between late 19th century and early 20th century. From the archive of Nguyen Anh Tuan

During the Nguyen Dynasty, the emperor and several of his guards were the only males allowed inside the Forbidden Palace (Purple Forbidden Citadel). All the rest were imperial consorts, concubines, palace women and maids. Nearly everything-from serving the emperor to the hard labour of palace life – was entrusted to the palace eunuchs. The most special and serious task for the eunuchs was making amorous arrangements for the emperor. At night, a palace eunuch would submit to the emperor a tray with stone tablets that recorded the names of the emperor’s consorts and concubines so that he could select the one whom he wanted to see. The palace eunuch carried the selected stone tablet and hung it on the bedroom door of the person chosen. Elated, the selected person would be immediately bathe herself and apply a special self-made perfume. She would then wrap herself in a large cloth and sit, waiting for the eunuch to come and carry her to the Can Thanh Palace for the emperor. The eunuch had to record the name and age of the person who was favoured by the emperor as well as the date and time of the royal copulation in order to report it to the National Academy and be recorded in the registers.
The palace eunuchs also had many cunning tricks that allowed them to ‘promote’ a woman, should the emperor choose her. Thus, many palace eunuchs received confectionaries as bribes from the women so that they would be favoured by the emperor.
The team of palace eunuchs was also divided into five ranks (since the time of Emperor Minh Mang). Each rank received different amounts of money and rice.
As for clothing, the palace eunuchs resembled all other offices in that they had ritual attire and ordinary attire. The Palace eunuchs’ ritual attire was made of green silk, which was reserved for high-ranking positions and blue silk, which was left to low- ranking individuals. On the front, the palace eunuchs’ shirts had an embroidered green flower against a red background, in order to distinguish the eunuch from scholar officials, who had embroidered birds and beasts, and martial officials, who had embroidered quadrupeds. The palace eunuchs’ caps lacked the ‘dragonfly wing’ flaps common to other offices. The palace eunuchs’ ordinary attire was a black shirt and white pants, while their heads were covered by a black scarf.

The palace eunuchs were close associates of the emperor and clearly knew about his personal life. In order to eschew abuses of power by the palace eunuchs, the Nguyen Dynasty did not allow the eunuchs they employed to participate in affairs of state. The Nguyen Dynasty had already learned from the lesson of the eunuch courtier Le Van Duyet during the early Nguyen period. Le Van Duyet was a palace eunuch who did much to re-establish the lands of the Nguyen Dynasty. Later, Le Van Duyet, acquired the rank of Protector Governor, and decided many important matters in Gia Dinh and Dong Nai, irrespective of the wishes of the emperor. In order to avoid palace eunuchs’ abuse of power in later generations, in 1836, Emperor Minh Mang erected a stele in Van Thanh Hue that clearly engraved the palace eunuch employment policy: ‘[Eunuchs] are to be sent to transmit orders within the inner chambers only and are not to participate at all in any outside court affairs. Those who violate this will be heavily punished without mercy.’
Throughout their time at their posts, palace eunuchs had to live day and night in either the imperial palace, in service of the emperor and his wives, or at royal tombs in order to attend to the widows of deceased emperors.
Whenever they became ill or aged, the palace eunuchs had to convalesce or live out the rest of their lives in the Institute of Palace Eunuchs, right outside the Imperial Citadel. The palace eunuchs were not allowed to die in the inner palace or at the tombs, which were sacred places reserved only for the emperor and the emperor’s most intimate women. Since they could not start families in order to have children and maintain the family line, many Palace eunuchs forged lifelong bonds with one another so that they could confide, talk, console one another and extinguish the feeling of loneliness in their lives. Some even adopted orphans, as did Le Van Duyet, in order to attend to their lineage’s posterity.
In 1843, the Palace eunuch Chau Phuoc Nang stood up to mobilize the Palace eunuchs and the people to contribute to the construction of a Buddhist pagoda called Tu Hieu Pagoda. The Palace eunuch most venerated at Tu Hieu Pagoda is a military officer who served under Le Van Duyet. On the premises of the pagoda, twenty graves of palace eunuchs who contributed to the pagoda can still be seen.
* Nguyen Dac Xuan is a freelance researcher on Hue