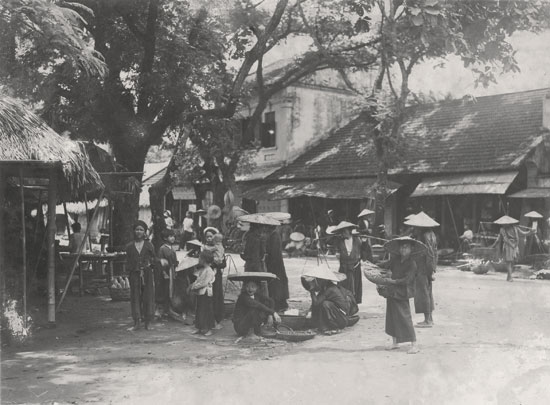 Bazaars outside Hanoi in early the 20th century.
Photos from the archive of Nguyen Anh Tuan

Photos: Dong Xuan Market in the old day
Photo from the archive of Philippe Chaplain.

Photos: Dong Xuan Market in the old day
Photo from the archive of Nguyen Anh Tuan

Photos: Dong Xuan Market in the old day
Photo from the archive of Nguyen Anh Tuan

Photos: Dong Xuan Market in the old day
Photo from the archive of Philippe Chaplain.

Bazaars are not, by nature, permanent structures. Rows of thatched huts, mostly wall-less, they come and go based on the needs of the town or village and the fortunes and fates of the individual families that make up the vendors. When the market is closed for the evening or a holiday, the simple structures are desolate and sad.
Years ago, village bazaars had all that was needed for the locals’ everyday life. There were always some blacksmith shops to make and mend tools. A few clothes vendors. Rows of rice, salt, vegetables and meat. A separate corner for fruits. One or two tables equipped with a sewing machine to make or mend clothes. A few peddlers selling necessities, like threads and needles, flint, rubber bands, fishing lines and hooks and kerosene lamps.
No bazaar was without a hectic food shop area with all sorts of local delicacies, which sent mouth-watering smells all over and far beyond. Drunken men fell fast asleep on tables and staggered home only in late afternoon.
Most who went to the bazaar knew each others well. Strangers were rarely seen. There were no burglars. Sometimes a few beggars from far away came and sat at the gates. No one felt cheated-the initial asking price was never too high, and only existed to creating bargaining, which was believed to bring luck and satisfaction to both parties.
The bazaars were thus peaceful oases of culture until urbanization swept away everything. Supermarkets and large, commercial bazaars became the norm. Suburban bazaars are now spacious structures. There is a large area outside for merchandise. The parking lot is so big it takes forever to find one’s own motorbike.
In the late 19th century, the French began constructing Dong Xuan Bazaar. The building was enforced by steel frames and rivets (similar to those of Long Bien Bridge), done by the masters dwelling on Lo Ren (blacksmith shop) street. The building was large and spacious, a wonder of high-tech grandeur.
Later Dong Xuan was expanded towards the Red River dikes. This part was called Bac Qua. People later called it Dong Xuan – Bac Qua bazaar. The Dong Xuan side sold dry foods, clothes, and jewellery and metal household tools. The Bac Qua side sold all sorts of foods, cooked and uncooked. Bargaining, cooking and eating, all were done accompanied by the smells of food and kitchen smoke.
The space between Dong Xuan and Bac Qua was the kids’ favourite. Plenty of fish, birds, plants and pets were sold there. It was like a small zoo with a whole orchestra of nightingales, laughing-thrush, orioles and other song birds.
No city bazaar is without thieves. Dong Xuan became thick with thieves in the 1970’s and 80’s, mostly pick-pockets. New sayings appeared around here, like ‘As many as thieves at Dong Xuan’ or ‘Four pick-pockets a square metre’. Hanoi people got so used to them that anybody complaining about the issue of burglary at Dong Xuan would be considered a country bumpkin.
Dong Xuan – Bac Qua was repaired in 1990. It became a bit neater but much less lively. Then, the 1994 fire destroyed everything. Vain efforts to restore it only resulted in the fake-looking façade. The glorious structural elements inside are now replaced by soldered steel bars which can attract nobody’s attention.
Dong Xuan nowadays is the only big bazaar of Hanoi which still preserves the old trade culture, although the goods have changed. Looking closer, one can still find the pure elegance of trading girls of Hanoi. They have preserved stylishness in making deals. Not inviting too much, and rarely shrewish. And it’s been a long time since the last thief came here.