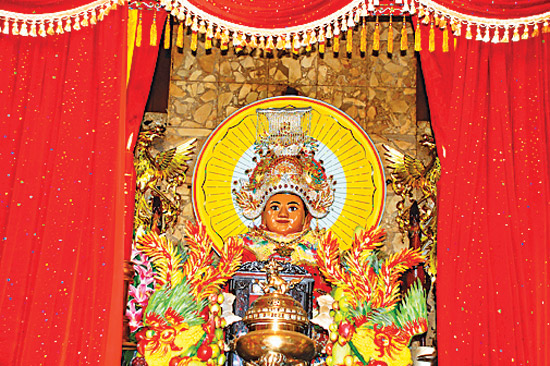 The Lady of the Land

Guarding the entrance to the Seven Mounts area for many years, the Temple of the Lady of the Land on Sam Mountain, Chau Doc, An Giang Province, Mekong Delta, receives over three million visitors each year. People come to visit Her with reverence for the legends around the origins of Her statue and the 200-year-old temple.
Late in the 4th lunar month (21-25 May, 2014) festivities at the Lady’s Temple are at peak. Vehicles from many provinces in the country pour in. People burn incense and pray in the main temple, then spread out to other, no less famous historical vestiges: The tomb of Thoai Ngoc Marquis, Tay An Pagoda, Cave Pagoda, and others.

A goddess’ legend grows with time and devotion

A motorbike taxi driver, named Thanh, who was stationed opposite the temple, invited me on a tour of Sam Mountain, Rendezvous Garden, the Bastion, the place She sat…all for two dollars, round trip.
On the way, Thanh told me tales about Her: 200 years ago, She sat on the mountain top. Once, a group of foreign bad guys came to cause havoc. They saw Her statue, got greedy and tried to steal it.
As the thieves moved Her just a short distance, She miraculously became immovably heavy. They got mad and smashed the statue with sticks and broke one of Her arms and left. The marks of restoration can still be seen.
Right after that, She entered a young girl near the mountain. She claimed to be the Sacred Lady and told the villagers to send nine virgin girls to come with a palanquin to receive Her. Indeed, when the girls came with a palanquin, She was as light as a cotton flake. The procession went down the mountain, but when they came to where the temple is now, they couldn’t move Her any more. So the villagers built Her temple there.
That’s a story Thanh knows by heart after years of taking part in staging the scene of the procession to get Her down to the temple. His grandfather, who was on the board of tomb and temple management before 1975, heard it differently. In early 19th century, the King commissioned Thoai Ngoc Marquis to fight the enemy on the border and to build Vinh Te Canal.
At home, his wife, Madam Chau Thi Te, was worried. Everyday she came to the Lady’s statue to pray for her husband and his men to be safe and to accomplish their mission soon. When Thoai Ngoc Marquis came home victoriously, Madam Te had the villagers bring the Lady in a procession and build a temple to worship Her.
‘The Viet people worship mostly female deities, and maybe the Lady of the Land was an idea of Thoai Ngoc Marquis. In the situation where miasma and epidemics erode people’s physical and mental well-being, Thoai Ngoc Marquis moved the statue down from the mountain and built the temple for the Lady, to make the people feel protected and blessed by a supernatural power, so they would be more confident and united to overcome hardships and build a happy life on the frontier,’ Dr. Lam Quang Lang, deputy head of the Dept of Culture, Sport and Tourism, vice chairman of the Association of Historians of An Giang Province told me.

Temple of the Lady of the Land on Sam
Mountain, Chau Doc,
An Giang Province.

The site where the Lady of the Land sits before She was moved to current temple,
also on Sam Mountain.
Photos: Tan Duc

Whatever the case, all of the different versions share some facts: the Lady’s statue is an ancient relic, brought here by boat and installed at the top of Sam Mountain. Mr Thai Cong No, deputy head of board of Sam Mountain tomb and temple management, has an intriguing material: ‘In 1941, a French archaeologist named Louis Malleret came to the temple and meticulously studied the statue and published his conclusion: This is a high-artistic value statue of Vishnu, sitting and contemplating noble thoughts, made of red limestone in late 6th century.’
In his research work ‘Mekong river delta – old lifestyles’ (Tre Publishing House), writer Son Nam also remarked: ‘The Lady’s statue is actually a male statue that the Khmer people left since ancient times at the top of Sam mountain. The Viet people moved it into the temple, painted it as a woman in silk dress, wearing a necklace. From that time, the Lady of the Land became a powerful deity.’
Following the lead of materials one can’t help shuddering at the hypothesis that ‘the Lady’ statue in the temple is actually a male statue! One document even describes it in details: ‘In reality, the Lady’s statue is a stone statue depicting a man in sitting position, his right leg bent at the knee, his foot propped directly against the stone pedestal.’
Historian Tran Van Dung, deputy head of bureau of propaganda, Chau Doc city Party Committee, An Giang Province, and author of the scientific research work ‘History of ground breaking of Chau Doc area’ (1757-1857) asserted: ‘The Lady of the Land statue is in reality a male statue in a regal sitting posture!’
There was a rumour that the Lady’s statue grew bigger and taller over time. Somebody even said it was impossible to take the statue’s photo: only a white silhouette appears in the picture. ‘Many pilgrims from afar offer Her dresses and ask to put them on Her statue at once so they could pray. Layer after layer has been put on Her, making some think that Her statue grew bigger,’ Mr Thai Cong No explained.
A Vietnamese version of the article was published on Tuoi Tre in May, 2013