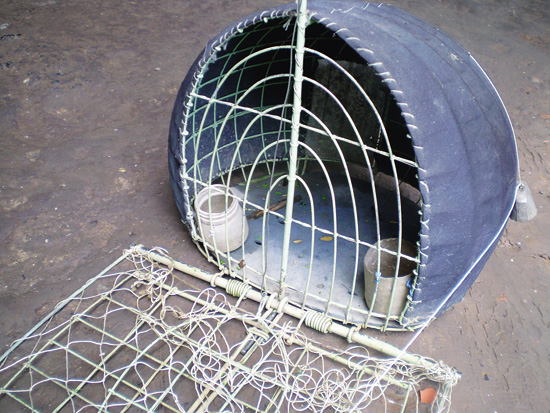 The indescribable allure of the white-breasted waterhen

A house for the provocatuer with trap for the newbie, with bell

Vietnam Heritage, July-August 2011 — The white-breasted waterhen, or chim qu?c, Amaurornis phoenicurus, is a glossy-grey-and-green waterbird with a white chest. It usually lives in spare brush, where there is plenty of grass and water hyacinth, where it can feed and disappear. It is on the International Union for Conservation of Nature’s list of fauna that needs to be protected, with the status ‘least concern’.
The white-breasted waterhen is a source of inspiration to poets, as it drones through summer nights deeply and sadly, as the poets hear it, as if releasing a heavy, secret feeling.
A king of China at the time of an invasion is said to have grieved, fallen sick and died and been born again as a white-breasted waterhen that missed its country, so the bird call has long been connected with nostalgia for country.
Mr Nguyen Van Ho, from Thot Not District, Can Tho, Mekong Delta, a bird-lover for half-a-century, says, ‘The ornamental birds I love most, so far, are tigrine doves, white-breasted waterhens and water fowl.’ This is because they have ‘the heroic disposition’: they are ready to die to show their faithfulness to ‘the one they love’.
Mr Ho is old and has passed all his secrets for raising birds to his sons, Nguyen Truong Giang and Nguyen Truong Cuu.
He said, ‘In the 1960s, there were innumerable wild white-breasted waterhens. Every year, toward the end of spring and the beginning of summer, when the weather was still warm, the boisterous droning of [these birds] was heard everywhere. This was the period for them to make love incessantly and build nests to lay eggs. The males together with the females were so excited and aroused all day long in the bushes, near the swamps, in the ponds or rice fields, where there was a lot of water hyacinth and greenery convenient for them to make love, build nests . . .’
Nguyen Truong Giang has had a passion for the birds’ call ever since he was a schoolboy.
Every time he blows a whistle or makes a hand-sign, dozens of the birds in his garden reply excitedly. He says that many years ago the number of white-breasted waterhens was decreasing because people caught them by setting a net or snare or using a luring sound, but then a resolution was passed prohibiting the catching of wild birds, and the numbers of birds like cuckoos and white-breasted waterhens have been increasing. He takes care of and raises white-breasted waterhens not for profit but because he has a passion for them and wants to nourish the rustic joy that his arents had in raising them.
The Vietnamese raise white-breasted waterhens for ornament, not meat. Some think keeping them as ornamental birds and multiplying them is also a means of preserving the wild birds. A young man once told me: ‘On the days when it is burning hot and we hear the noise . . . resound, we get excited and rush out with a snare . . .’
The trapping season begins in the tenth lunar month and lasts until the sixth lunar month of the following year (from September 2010, to July 2011). The best time is New Year, after the harvest of late winter or early spring. The male is glossy green, with a red comb and brimming with vitality, calling its lover incessantly.
Mr Truong Giang explains, pointing to a bird in a cage, ‘The white-breasted waterhen is a waterfowl. They live in pairs, a male and a female, making love all day long in bushes. At the least sound they slip away very fast; there is no way a hunter can shoot them. When the love-making season comes, they collect hay straw and build nests and lay eggs, four to six eggs to a nest.
According to Truong Giang, those who raise birds usually have a lot of spare time, free from worries. To trap a white-breasted waterhen one needs to train one that is agile and courageous and has a glossy plumage and strong legs. It has to be audacious and warlike. As soon as it sees a strange male white-breasted waterhen, it must flap its wings and call arrogantly.
Training takes six months to a year, from when the chick is hatched and selected.
The trapper of white-breasted waterhens finds a quiet, deserted place and sets a trap disguised with water hyacinth or other vegetation. The trained white-breasted waterhen, inside a cage, calls. A wild white-breasted waterhen calls back angrily about the invasion of its space. There is a confrontation and the trap is sprung.
A bird of either gender can be trained as a provocateur. A male white-breasted waterhen can be a provocateur only to trap a male, but a female can be provocateur to trap either gender.
Mr Thuyen says that when a male is caught its mate grieves, feels lonely and drones day and night. This female can be used to trap a male that approaches to make friends.
When a female from the wild hears a female in the cage, it thinks that it is its rival in love, and gets trapped when it tries confrontation.
Mr Thuyen, the owner of the Bang Lang stork garden, in Thot Not District, is also very experienced in trapping and training white-breasted waterhens. Nowadays, at the age of 70, he still takes his traps to the field, in order to relive memories. He said also, ‘The trapping of white-breasted waterhens teaches me how to remain calm and patient. Especially, the call of each kind of bird brings us a sense of comfort which assimilates us with the wild, allowing us temporarily to forget tiredness and get rid of sorrow.’
Watching two white-breasted waterhens fighting, one inside and one outside the cage – a fight lasts only a few minutes – is exciting to trappers and pure spectators.
Mr Thuyen said, ‘I have trapped cuckoos since I was a schoolboy, but every time I follow the white-breasted-waterhen-trapper, I get terribly excited . . . although it is less tense, the joy and excitement is hard to describe . . .’