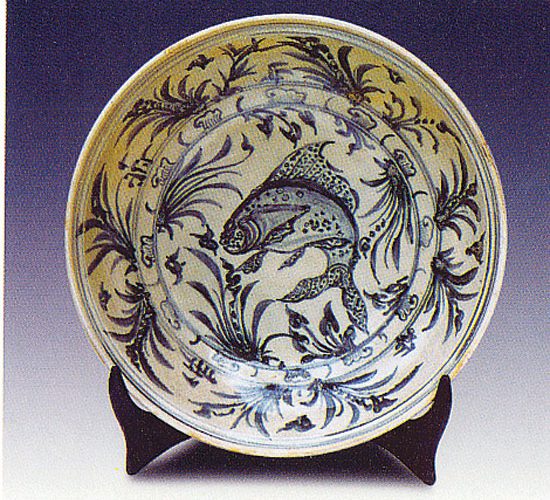 The history of blue porcelain

V ietnam Heritage has been publishing a series based on ‘2,000 Years of Vietnamese Ceramics’ by Nguyen Dinh Chien and Pham Quoc Quan, published by Vietnam National Museum of History, Hanoi, 2005.
This month, the topic is blue and white ceramics.
In China, this type of ceramic, which has a vivid bright Persian blue, flowered as early as the Yuan dynasty. In Vietnam, wares with opaque ash-blue, which students of ceramics now called pre-blue and whites, were not produced until the fourteenth century. Many examples have been found, mostly at random. Typical are white bowls, ewers, small tureens and spittoons that have one or two large opaque blue lines around the mouth and two double sprays on either side of the body.
Recent excavations at two Tran sites of Xom Hong (Hai Duong) and Kim Lan (Gia Lam, Hanoi) have consolidated the previous opinion on this kind of pre-blue and white ware.

Blue and white ceramic with a lid. Photos provided by Nguyen Dinh Chien

On the other hand, more evidences discovered recently have also confirmed that, as early as the Tran dynasty, cobalt imported from the Middle East was used in Vietnam.
Remarkable examples are a few Tran globular ewers with two realistic lotus bushes painted in Persian cobalt blue on the shoulder and cover. Most recently, a bottle- shaped vase (yuhuchun) with a phoenix painted in Persian blue has been recovered from Cu Lao Cham shipwreck along with the typical Tran dishes and bowls which have the chrysanthemum motif brown painted in their well.
However, true Vietnamese blue and white ceramics were not produced commonly until the fifteenth century.
Examples comprise mainly bowls, pots and bottles with well-done clay bodies painted finely with bright cobalt-blue against an ivory-white ground. The most outstanding example is the bottle with the regional date equivalent to 1450 in the Topkapi Saray Museum, Istanbul. However, several bowls and bottles with three to seven decorative bands have been considered Yuan wares by several scholars of ceramics. Of these, a bottle with seven bands of lotus petal, waves and flower sprays, now in the Vietnam National Museum of History, has raised much controversy. In fact, most of high-quality Vietnamese blue and whites, like this splendid bottle, have been not found in Vietnam, but abroad. Perhaps, they were produced expressly for export. The very rich collection of blue and white items recovered from the Cu Lao Cham shipwreck, dated to the first half of the fifteenth century, can be a convincing evidence for this opinion.
In the sixteenth century, Vietnamese blue and whites increased in quantity, but decreased in quality. Patterns such as lotus petal, flower sprays, phoenixes and carps were no longer painted finely and elaborately as before, becoming more Vietnamese.

Nam Sach county (Hai Duong), with Chu Dau and Hung Thang as its two most flourishing kilns, has been firmly determined as the production centre of Vietnamese blue and whites in the fifteenth to sixteenth centuries.
In the following periods, this type of ceramics continued to be produced, but in a smaller number.
So far, only one well-dated bowl has been found, which is painted with the classic Chinese pattern named ‘A group of bamboo trees’ and inscribed with the Chinese characters for ‘Produced in Quang Trung reign’ (1788-1792) on the base. Besides, there are a few wine pots in cracked white glaze, without dates but with a decorative style and manufacturing features similar to that bowl.
The nineteenth century saw the appearance of flower vases, single or in pairs, decorated with underglaze light-blue painting and with applied dragons and other motifs.
From the Le-Trinh period (1548-1786) Vietnamese ceramics in general, and Vietnamese blue and whites in particular, declined, due to the strong expansion of Chinese ceramics and porcelain all over the world. Especially, the Nguyen dynasty commissioned a large number of Chinese wares with some Vietnamese features for royal temples and palaces.
At the time, Bat Trang was the unique representative of traditional Vietnamese ceramics, while other centres at Mong Cai (Quang Ninh), Lai Thieu (Binh Duong) and Cay Mai (Saigon) developed under the influence of Southern Chinese kilns. At the same time, some production centres of unglazed stoneware appeared in the provinces of Vinh Phu, Quang Binh and Thua Thien-Hue.n