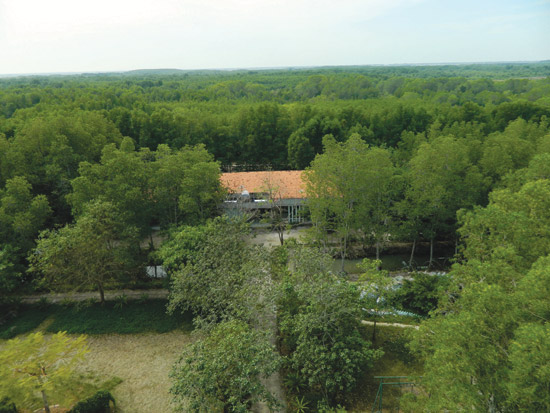 The greening of Vam Sat

A forest devastated by Agent Orange makes a comeback

I had yet to put on my lifejacket before the 40-horsepower motorboat took off from the pier, accelerating so quickly that it split apart the waterâ€™s surface on the undulating river amidst a vast, saltmarsh jungle. The wind blew fiercely against me, tossing the hair of three fellow travellers, who were watching birds up in the immense sky. â€˜This river is about 500 meters across and 7 meters deep,â€™ said the man steering the motorboat.
The four-seat motorboat glided across the waves for 15 minutes. â€˜Weâ€™ve arrived at the conservation area for the greater Asiatic yellow bat,â€™ announced the man at the motorboatâ€™s helm.
A woman , who was waiting for us on the riverbank, invited us to get in a four-person rowboat. She explained, â€˜Now weâ€™ll go see the bats. In order to keep quiet, we have to use a rowboat.â€™
After rowing the boat on a canal that lay amidst dense mangrove roots that jutted up a whole meter above the ground, the guide said, â€˜Thatâ€™s the place where the bats sleep.â€™ We all looked up and saw a bunch of bats hanging in the treetops of several tens of adjoining jungle trees. â€˜During the day they gather in one place to sleep like that. Come nightfall, they fly off together in search of food, and they bedazzle the eyes,â€™ a woman about 35 years old informed us.

When we got to within about 15 meters of the bats, several of them opened their wings and flew out. â€˜Many of the bats are as heavy as a kilogram with a wingspan longer than a meter. In 1999, there were almost 3,000 bats here, but people have been trapping them in nets and catching hawks, snakes, weasels and owls, so only about 300 bats remain,â€™ we were told.
Leaving the bat conservation area, the motorboat proceeded to rip across the river for 10 minutes before arriving at the Vam Sat Forest Tourism Area Centre. A guide named Tuan greeted us and introduced the place, â€˜The Vam Sat Tourism Area is a jungle 1,862 hectares in expanse, which has many canals, and lies in the heart of the Can Gio saltmarsh jungle biosphere reservation zone, which has an area of 75,740 hectares. The Vam Sat Forest Tourism Centre was recognized by the World Tourism Organization as one of the most stable ecological tourism areas. Thirty years ago, Vam Sat was just a â€˜deadâ€™ jungle because of the American armyâ€™s toxin Agent Orange. The American army dropped a total of 1,027,515 gallons of wilderness-clearing chemicals. With such an overkill amount of toxins over such a small area, they turned the pristine jungle into a devastated barren field. The forested area that remained after the war was a mere 4,500 hectares. However, through the peopleâ€™s efforts from 1978 to 1999, it has fully recovered to its original condition.â€™
According to the assessments of scientists from within Vietnam and abroad, the Can Gio Jungle underwent the best sort of restoration, care, and protection in the world. As for the people of Ho Chi Minh City, they liken the Can Gio Jungle to a â€˜lungâ€™ with the function of cleaning the atmosphere and, at the same time, a â€˜kidneyâ€™ that purifies industrial wastewater. â€™
As we climbed up several hundred stairs to get to the top of Tang Bong Tower, which is made of iron and is 26 meters tall, we saw that the material foundation of the entire tourism area beneath the jungle canopy was made primarily of trees and leaves, including the guesthouses, restaurants, offices, and even the suspension bridges that hung precariously over the narrow canals. About 500 [meters] away from the tower was the major river that twisted around the verdant expanse. Peering out into the distance in all four directions, we beheld the lushness of the Can Gio jungle for as far as the eye could see.
On the way to the crocodile nursery area, a pack of about 30 monkeys ran out of nowhere and surrounded us. Escaping from the band of voracious monkeys, we arrived at the crocodile nursery, a 1,000 m2 stretch of forest with a pond in the middle and enclosed by a steel fence. â€˜There are currently 46 crocodiles here that are up to a quintal in weight,â€™ Tuan informed us before going on to explain to several dozen listening visitors about the incubation process and cultivation of captive crocodiles in a semi-wild environment.
Tuan instructed us to get on a composite boat surrounded by a steel wire net and then rowed out to the centre of the lake. Within an instant, about 15 huge crocodiles came from the shore, plunged into the water, and encircled the boat, which made me feel as if I were tempting death. Perhaps noticing that everyone was all astir, Tuan reassured us, â€˜The boat is surrounded by a very safe steel net. The crocodiles cannot breach it.â€™
Tuan waved some bait a meter above the waterâ€™s surface and a massive crocodile immediately lunged up and snapped it off. The bite was so strong that its two jaws of jagged teeth clamped together, creating a loud crunch that made the visitors who were standing on the bank ooh and aah.
For lunch that day, we sat down in a spacious restaurant and ate VND35,000 rice dishes. The menu had lots of specialties that the tourist manager said were picked and hunted in the Can Gio forest. The most representative dishes were baked milk oysters, giant mudskipper salad eaten with â€˜kim kimâ€™ leaves, sesame roasted triple-notched crab, salt roasted Can Gio crab, compressed rice with pineapple-roasted fish, and assorted jungle vegetables steamed and dipped in dry salted fish brine.

Once our stomachs were stuffed, some people rented VND15,000 hammocks to rest beneath the trees. Meanwhile, we fooled around with yellow cheeked gibbons and deer, which may have lived in a semi-wild environment but were quite hardy. Next, we wandered around the winding narrow paths amidst innumerable trees whose gnarled roots popped out of the earth.
At 14:00, we began to view the birds by going to the conservation aviary, which was also called the â€˜Avian Courtyard,â€™ just 500 meter on the jungle path away from Tang Bong Tower.
Documents from the Vam Sat Tourism Area indicate that the saltmarsh jungle area was a 602ha expanse with a core area of 126ha. It was a place for cultivating types of plants like date palm Indian mangrove, beansprouts, mallows and ferns and for raising about 7,000 living species of birds, the most representative of which were the jabiru white egret, milky stork, cattle egret night heron, cormorant and Oriental darter.
After climbing the 10m high tower that lay in the middle of the Avian Courtyard, we gazed all around and saw several hundred winged birds gliding across as their cries resounded above. The verdant jungle floor and many stretches of forest were stained white from the birdsâ€™ defecation.
â€˜Now there are few birds. If you guys came during the months from May to October, then youâ€™d see all kinds of birds flying densely above the Avian Courtyard with deafening cries and thereâ€™d be innumerable nests atop the trees,â€™ intimated Ho Thi Ngoc Nhu, the manager of the Vam Sat Tourism Area.
After five hours in Vam Sat, we got into the motorboat and returned to the pier to pick up our motorcycles for the back to Saigon. If we had wanted to stay the night, we couldâ€™ve slept in rooms at 300,000Ä‘ for two persons per night.

How to get there:
– Take bus no.20 at the station in front of Ben Thanh Market to get the Binh Khanh ferry.
– After crossing the river, take bus no.90 which runs the line from Binh Khanh to Can Thanh.
– Get off at Dan Xay Bridge and buy a ticket at VND485,000 per person for a Vam Sat tour. The price includes the services
in the article; only the rice dishes needed to be paid for separately.

Text by Dang Khoa and photos by Kim Long