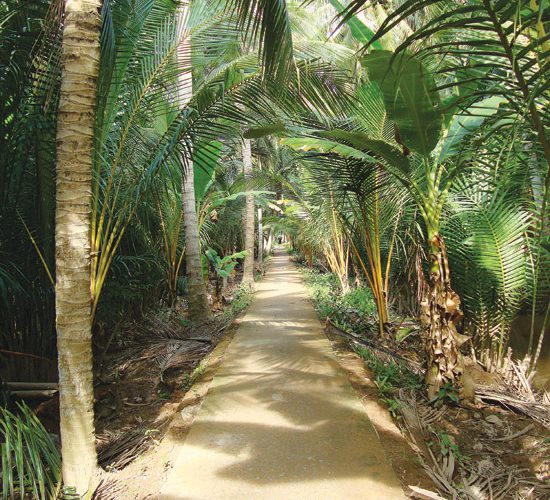 The coconut king of Snail Island

At 8.3 kilometers in length and over one kilometer in width, Snail Island (Cá»“n á»‘c) is right at the heart of Ham Luong River, which is a branch of the Mekong, and flows through Hung Phong Commune, Giong Trom District, in Ben Tre Province.
Snail Island is the largest of Ham Luong River’s islands and covers an area of 647 hectares. This island used to be inhabited by lots of snails, which explains the name, according to the Ben Tre Province’s official website.
The other name of this island is Hung Phong.
Following cement walks zigzagging through the island, I realized that the walks lead to many coconut groves. The island is also dotted with houses made of coconut wood and thatches roofed with coconut leaves.
â€˜My grandfather told me that after the French invaded Vietnam in 1858, they forced Vietnamese farmers to grow coconuts all over the island. This place was one of the very first places to grow coconuts in Ben Tre Province before the plant was grown virtually everywhere in the province,â€™ said a 70-year-old senior.
Ben Tre Province is known as the kingdom of coconuts.
â€˜Coconuts have been part of many of the local customs such as weddings, funerals, house building for centuries. The locals often used coconut leaves to build pavilions for wedding ceremonies and funerals about 20 years ago,â€™ said an 80-year-old woman.

There are lots of women sitting in front of their simple houses to make furniture and souvenirs from coconut leaves. Coconut trunks and shells are also used to make cute furniture and souvenirs.
â€˜The current Snail Island population is about 1,300 households with nearly 6,000 people, and more than 500 households earn their living from coconut products,â€™ said Tran Van Nghia, chairman of Hung Phong Commune’s People Committee.
I stopped for a sweet bean soup (chÃ¨) at a street shop. The thick coconut milk in the shop inspired me to ask the shop’s owner about dishes prepared from coconut.
â€˜Hundreds of dishes can be made from coconut fruits. The core of young coconut tree is also edible,â€™ said the woman.
After roaming the island for two hours, word of mouth guided me to Mr Do Thanh Thuong at No. 131, Hung Phu 1, who is known as â€˜The Coconut Kingâ€™.
Mr Thuongâ€™s house is also walled and thatched from coconut wood and leaves, its tin roof standing out as the only non-coconut product.
Mr Thuong told me that he has worn the nickname â€˜Coconut Kingâ€™ since 1993, when coconut prices dropped so low that coconut farmers had to chop down the plants to switch to more profitable ones. Since his family had grown coconuts for five generations, Mr Thuong simply did not have it in him. Then, a group of researchers from Vegetable Oil Research introduced him to the new coconut variety-PD12-and provided the seeds for him. The new coconut type yielded as many as 150 nuts per tree only after two years. His success inspired many famers in the Ben Tre Province to try their hand at growing this new variety. Since then, Mr Thuong started making good money by being a local seedsman.
The â€˜Coconut Kingâ€™ showed his two certificates to me. One of them acknowledges him as the best coconut grower in Vietnam, and was awarded by the Asia-Pacific Coconut Association in 1999. The other certificate is â€˜Tree of Life,â€™ awarded by the International Seed Bank in 2004.
â€˜Many domestic and international organizations have invited me to share my experience in growing coconuts using both traditional and novel techniques,â€™ said Mr Thuong.

Mr Thuong also plans to buy a coconut oil extracting machine to make cosmetics and medicines from coconuts. He even dreams of building a coconut museum to help tourists and the future generations to gain a better understanding of life on the coconut land. More and more tourists, both international and domestic, have visited Snail Island. Many travel companies already operate on the island.
â€˜Many foreign visitors have dropped by my house to taste my more 20 types of coconuts and they fished and prepared the fish themselves. They had dinner with me and spent the night here,â€™ Mr Thuong added.
Realizing the tourism potential of the island, the Ben Tre Provinceâ€™s Department of Planning and Investment has called for investments to build a $30 million resort.
This call was made even while the island has shown dramatic erosion due to the exploitation of sand in the surrounding river.
A local who wants to remain anonymous said that there have always been 20 to 30 boats with equipment to harvest sand from the river bed, causing serious erosion for many houses and gardens. Three houses have fallen into the river. â€˜Residents of Snail Island have lodged a complaint with authorities of the district and commune. Nothing has changed yet, raising doubts that such illegal exploitation is under the local authority’s protection.â€™
â€˜The province’s authority granted permission for three companies to exploit sand in the waters surrounding Snail Island three years ago. It’s not illegal exploitation,â€™ said the commune’s chairman.
â€˜It is such dramatic exploitation that causes serious erosion. However, we have not calculated the erosion area statistically. The locals have filed complaints to the province’s authority so many times. Yet, the province’s authority insisted that the exploitation is perfect for water flows, and so could not do any harm to the island,â€™ said the afore-mentioned anonymous local.
â€˜Since the local residents are so angered with the answer from the province’s authority, they have fought many times with sand-exploiters. In turn, the sand-exploiters have hired gangsters to fight back against the locals,â€™ he said.

How to get to the Snail Island
Get a VND40,000 bus ticket to Ben Tre at the Mien Tay Bus Station in Ho Chi Minh City. From the centre of Ben Tre, head for and cross the Ben Tre Bridge, and keep going until the roundabout. Turn left to Highway 887, keep going straight for 10km to the Hung Long Ferry Terminal. The ferry can take you to the island.
Or, you can hire a tourist boat under the Ben Tre Bridge, which costs VND300, 000 per hour and seats up to 12 people. It takes from 2.5-3 hours to get to the island by boat.