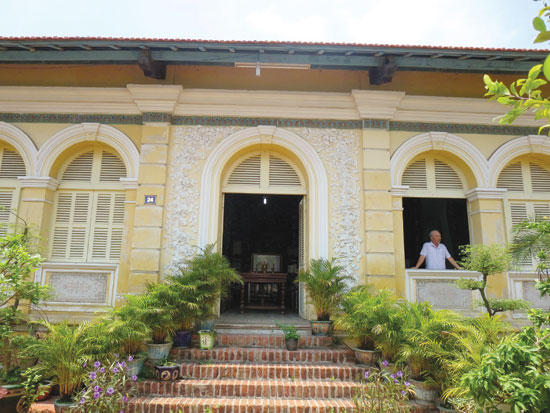 The facade of the house

All the furniture and wooden utensils are made with nacre, another name for mother-of-pearl. According to Mr Thoi, the wood was bought from Laos and Cambodia and transported on the Mekong. Live snails were bought from the North for nacre. Nacre masters were also hired from the North, because at that time there was no such trade in the South. In the centre is the altar of the seventh ancestor of the Le Cong clan. On both sides are those of the subsequent ones.
There are poems written in Chinese letters, inlayed with nacre on all the pillars and wall panels. ‘Each of these means to preach the way of being humane,’ Mr Thoi said.

Inside the house with wooden furniture inlaid with nacre

The Le Cong residence has three invaluable relics saved for posterity.
First is the Decree of Conferment of Sainthood on Nguyen Huu Canh (the pioneer who expanded the Southern borders). Such a title is normally only conferred upon those who had great merit, and the decree would be enshrined. Otherwise, the decree text may also be given to someone else for outstanding service.
The Le Cong residence was honoured with two such decrees of sainthood that were conferred on Nguyen Huu Canh, one by King Tu Duc and one by King Minh Mang. Mr Thoi relates, ‘Our ancestor, Lord Le Cong Thoan from Thanh Hoa Province, came here and decided to plant his roots in Chau Doc. He began to clear the land. Gradually, his land was large enough for birds to tire as they flew over it. He gave money to the desperate, and land to the homeless. He built communes and schools. Once, the land was ravaged by flood, and people suffered a great famine. Mrs Huynh Thi Phu, Le Cong Thoan’s second wife, borrowed rice from the government to save the people. For that kindness, the King bestowed upon him the Decree of Super Sainthood Conferment of Nguyen Huu Canh as a token of esteem.
Since then, the Sainthood Conferment has always been solemnly honoured on the central altar of the clan. The 10th of fifth lunar month every year (Nguyen Huu Canh’s death anniversary), Le Cong descendants bring it in a procession to the Chau Phu Saint temple of Chau Doc and organize a ceremony for people to worship him.
The second relic is the precious, century-old ‘Golden branch with gemstone leaves’ inlayed picture, depicting gold branches and emerald leaves. The picture is secured in the clan’s secret safe and is retrieved only for very big events.
Third is the genealogy book of the family. According to Mr Thoi, it records names and relationships of all of the members of the Le Cong family from the first generation until now. ‘The book helps the descendents remember and celebrate their glorious ancestors. So its spiritual value is enormous, incomparable!’
‘Chau Doc currently has about 10 century-old houses. But only the Le Cong clan’s and Mr Phu Di’s house remain intact and retain their original value,’ Mr Le Hong Linh, Deputy Head of Culture Dept of Chau Doc City told us.n

Text and photos by Phuong Lan