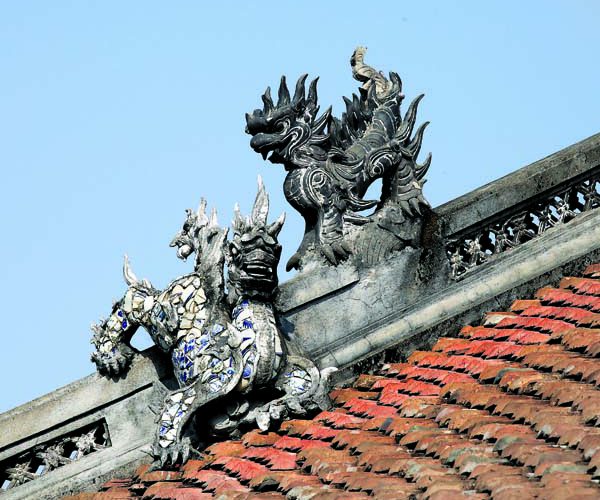 Temple of the dragons

Dragons on the gate, roof, column.

A wooden temple is the host to hundreds of dragon carvings

Located 2km to the east of the center of Hai Phong City, Hang Kenh village temple is considered an architectural structure that bears all the traits and styles of a Vietnamese ancient temple.
Built around the 17-18th centuries, Hang Kenh village temple was expanded in 1905 to its present stature. It hosts many valuable relics; most notably a stele that lists the names the most academically successful villagers between 1460 and 1693.
The main building material of Hang Kenh temple is iron wood. The premises are laid out in the shape of the Chinese character ‘?’, with a doubled grand edifice at the front and a rear edifice both connected by roofed corridors. The temple roofs are tiled with mussel tiles with two dragons kowtowing to the moon motif on the top. The two ends of the rooftop are uniquely designed as two dragons making a half-coil, their mouths holding a roof edge. The four roof corners ridges are four crocodiles and the two dragons twine together as if intending to lift the whole temple to soar.
The grand edifice is the most important part in the whole complex. It is 32m long and 13.2m wide, with seven beams and 32 pillars that divide it into five compartments. The pillars are 2m in diameter and 5m tall, each standing on blue lime rocks carved in the form of a blossoming lotus.
Besides achieving architectural perfection, Hang Kenh temple is also a masterpiece of carved art. Stylized dragons, clouds and flowers carved on boards and gratings look no less than heavenly. The middle chamber’s lacquered and gold plated curved door, carved through from both faces, is actually a composition of connected statues of two dragons kowtowing to the moon, a pair of phoenixes spreading their wings, some horses crossing a river, and a turtle walking on a lotus pond. In over 100 such carvings and reliefs of the temple dragon, one of the four sacred animals of the Vietnamese, is the main motif. Remarkably, all 308 dragons in the temple are in different positions, and all appear in a group, such as a mother and her cubs twining together among plants and flowers.
Over three centuries have passed, and the ancient forms remain intact under traces of time on the curved roof ridges and on the age old banyan tree reflected in the water of the crescent pond. Most notably, a festival to commemorate the national hero Ngo Quyen and his victory at Bach Dang in 938 AD has been regularly conducted at this temple since the 17th century.