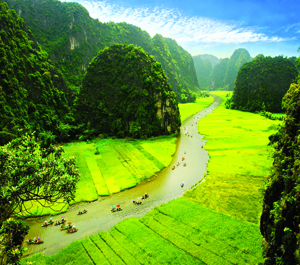 â€˜Spending over a week wandering tortuous paths of the northwest mountains, I thought I had seen all the mind-blowing beauty of Vietnamese paddies. And yet, I was astonished again at the sight of successive limestone lining up on an endless rice field. A thousand years ago, this place was the capital of three dynasties that have left marks on the face of the earth.â€™
That is the impression of Ewen Bel, a British news reporter, about the rice fields in the 350ha Tam Coc â€“ Bich Dong tourist zone of Ninh Binh Province. The fields are located at the heart of the 12,000 ha Trang An conglomerate of famous landscapes, a â€˜worldâ€™s cultural and natural heritage siteâ€™.
Besides sculpture like rocks standing on a plain field, and resembling Ha Long Bay, a Worldâ€™s Wonder of Nature, the Tam Coc â€“ Bich Dong tourist zone also has many historical vestiges related to the Vu Lam royal step-over site of the Tran Dynasty almost 800 years ago.
This area is located just 2km from 1A national highway, 7km from Ninh Binh and 9km from Tam Diep, which are about 100-110 km from Hanoi.
According to the Tam Coc â€“ Bich Dong tourist zone management, it is connected to the Trang An Worldâ€™s Cultural and Natural Heritage Conglomeration by nearly 20 touristsâ€™ routes for bikes, woven bamboo boats or by hiking.
Worthy of the name â€˜Ha Long Bay on landâ€™, Tam Coc â€“ Bich Dong is scenic, poetic and deeply miraculous at all times and in all weather. But it is the most fabulous during the harvest season from late May to mid- June.
From 8-9 am, with a ticket bought at Dinh Cac landing, you are seated in a local traditional woven bamboo boat. The boat leisurely carries you along the Ngo Dong River, endlessly meandering amidst a boundless field of ripening rice and sculpture like high rocks which tower above everything.
Cool breezes make the rice ripple and you feel as if you are cruising in a Ha Long Bay where seawater has turned golden. Every now and then, you come close to sheer rock faces and enigmatic-looking caverns.
After about 45 minutes, you arrive at Tam Coc landing in order to visit Thai Vi Temple, to see how inseparable history and nature can be. Built in 1258, Thai Vi Temple is dedicated to the heroes that were stationed at the Vu Lam military base; Kings Tran Thai Tong, Tran Nhan Tong and their top military leaders Tran Hung Dao, and Tran Quang Khai.
Tam Coc means three caves because it has First Cave, Second Cave and Third Cave. Leaving Thai Vi Temple, you hike a short distance to see the caves, which are all carved out by the water of Ngo Dong River over millennia. 127m long, First Cave, with a 20m wide entrance and a lot of stalagmites, pierces a big rock. About 1km away, the 60m long Second Cave exhibits milky stalactites. Nearby, the Third Cave is only 50m long, with a lower ceiling.
After having local delicacies at lunch in Tam Coc Restaurant, you get moving again to get to Bich Dong, just 2km away. The name Bich Dong, given by the Royal Executive Nguyen Nghiem, father of the great poet Nguyen Du in 1773, means â€˜Blue Caveâ€™. In the old time, people said that Blue Cave was the second most beautiful place in the country.
The Bich Dong area includes a small cave halfway up a mountain, three pagodas built in the era of Late Le Dynasty (1427-1789), and most notably, a creek running in a cave through a mountain base, thus called Xuyen Thuy Dong (Water Pierced Cave).
Xuyen Thuy Dong is like a half-pipe, 350m long, zigzagging through from the East Side to the West Side of Bich Dong Mount. The pipe is 6m in diameter on average, and 15m in the widest place. The walls are quite smooth, and the ceiling is beautifully curved and decorated with rocks of different shapes.