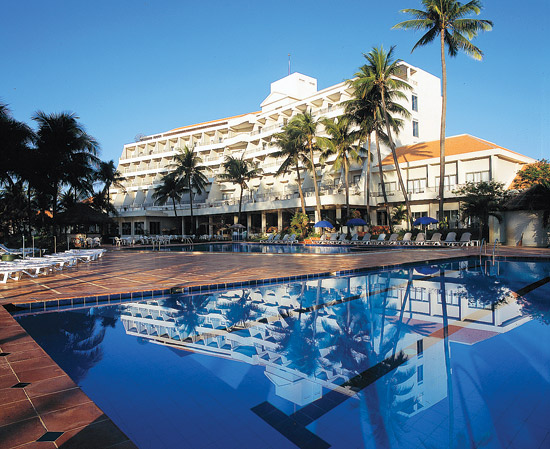 When one chooses to stay at international brand name hotel one does so with the expectation of guarantees of quality and deliverance of a certain set of services. One expects to eliminate the pot luck element there can be in staying in a place which is locally run. One downside to this is that the hotel chosen may lack local flavour and the building and the room in particular may look as if it has been carbon-copied and could belong anywhere in the world. Indeed one brand’s advertising campaign backfired a few years ago when it advertised staying in its rooms was just like being at home. Not everyone wishes to travel half way around the world to feel like that. A second objection people have to staying at a famous name place is that there might be little concern for the local people or economy and particularly in a poorer country one’s tourist dollar may not be helping to bridge the inequalities. Novotel is a well established brand that promises you a four-star experience of international and not just local assurance. As the name implies, you expect the hotel to be a new building and not a place of historical interest, so some effort might be required to give it ambience. I had already stayed in two Novotels before, one in Dalat, Vietnam and the other in Ypres, Belgium, each of which had both rendered all expected comforts and displayed local character. I was thus quite excited about the prospect of staying in my third Novotel in Phan Thiet, and as for the question of sensitivity toward the local economy, that was one I was going to put before management in an interview.

The approach to the Novotel Phan Thiet is grand and one star above expectations. It is like following the drive to the approach of an English stately home with woods, the sea and then the Golf Club House on one side and the course itself with jagged mountains behind on the other. As your bags are whisked away by bellboys and you enter the lobby with its high fans and hard wood furnishings your sense of grandeur hightens and you may feel you have entered a country mansion in which to set an Agatha Christie murder mystery. On closer inspection you realise you are actually in the Orient as large ceramic jars are placed against the walls and pillars, in a recess are gilded wooden statues looking like Vietnam’s famous water puppets and there is a souvenir shop selling local memorabilia. A little further on there is an open corridor overlooking gardens decked with wickerwork chairs an area redolent of the French period in which to take an evening drink or smoke a cigar.
I did in fact have the opportunity to enjoy a beer and peanuts on this verandah and in the delightful relaxed company of the duty manager for the night who also happened to be the executive chef, Mr Jason Lynn, who hails from New Zealand. We talked about the green credentials of this hotel. It has internationally recognised certifcation. Only a few years ago even fully Vietnamese-run hotels were not taking this matter seriously but now it has become de rigeur. A fellow writer friend of mine was nearly run out of the country for pointing out that foreign guests are not partial to swimming in their own sewage. Staff here are regularly involved in beach clean-ups and the hotel even has a cow called Margaret who patrols the 1.3km beach hoovering up any bio-degradable waste. I watched out for Maggie in the morning but was told she had already passed by-an early riser just like the Vietnamese people themselves. Jason also informed me that the Hotel has a policy of recruiting locally as fully as possible and praised the people for their natural friendliness. Food as far as possible is bought from local markets. â€˜Did you know,â€™ he asked, â€˜Sturgeon is farmed locally now so we can offer Vietnamese caviar?â€™ The hotel also supports the local initiative to produce vanilla in this province, even arranging a tour to the experimental farm.

Our superior room was quite unusual for this part of the world. It had a parquet floor which for me adds instant Southern European charm and warmth. It was furnished with a sofa, a see-your-face-in-it polished writing desk, charming golden bedside lamps and a TV with a full range of channels. There were tea and coffee-making facilities with a well stocked mini-bar and a full range of toileteries in the spanking clean bathroom. On the whitewashed wall there hung a water colour picture of a wooded Vietnamese scene that reflected the reality of the trees in the gardens below. For me the greatest feature was its balcony wide enough for two rooms bedecked with comfy chairs and a table. I sat out there in the evening dreamingly admiring the sea and gardens with a glass of red Galliac wine in my hand. It was a starry light and with the lights of the hotel dimmed downwards I was able to point out the constellations to my daughter, the plough leading us to the North Star, the swooping shower of The Swan and the Great Bear.
The breakfast buffet really demonstrated the advantage of selecting a hotel with international expertise. Knowledge of customer demands and high standards of training of the friendly and attentive staff were in evidence. Seldom have I seen such a wide choice and all the western condiments were right at hand. There was Worcestershire sauce, a few drops of which I do enjoy upon my toast, Extra Virgin Oil, gourmet vinegars, mustard for the exquisite home-made herby sausages and even good old British HP sauce. All too often if you ask for such â€˜exoticaâ€™ at a locally run hotel of this standard you are met with blank stares. My Vietnamese wife enjoyed her pho breakfast although it took her a little time to recover from the shock of finding the broth was sweet as is the southern way of preparing it. She hails from the centre where they prefer it spiced up with a bit of chili pepper.
The range of activities on offer leaves you spoilt for choice. There is of course the championship golf course and management is keen to shed golf of its elitist image and get a wide range of folk to participate. There is also a tennis court, a table tennis and games room and a petanque (bowling) rink. The sea itself usually has wind enough for kite and wind surfing. There are cooking classes, spa and massage treatments in a beach side pavilion and biking tours as well excursions arranged to places of interest in the province. A list of special daily activities is posted in the lift. For the kids there are supervised activities and a babysitting service. On the morning of my stay I was up at six and ready for a dip in the two pools, one of which is oblong shaped with racing lanes marked out, and the other round and more for straightforward leisure. I popped my head out onto the balcony. What a scene already! You just can not beat the Vietnamese for early rising. They were all out there doing their morning exercises and tai chi!
The Novotel Phan Thiet is a fine choice for business, leisure and family holidays. It has fine comfortable rooms each with a view and it has truly international cuisine. It is sensitive to the local people and environment. It offers far more in activities than just the golf and beach implicit in its full name and benefiting from being part of a worldwide company it gives tip top service. With all that it has to offer, most should agree that this hotel offers exceptional value for money. All in all, it is the perfect place to chill out, enjoy first class food and beverage and perhaps try out a new hobby or learn something more about this beautiful country.