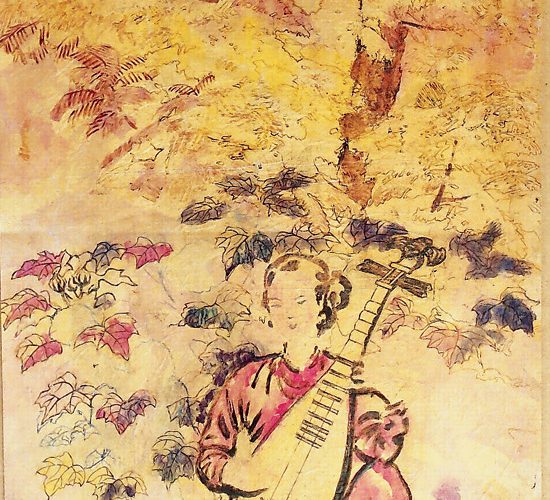 Some of the laws of lacquer painting

W hat follows are snippets from more than a decade of notes made by Vietnamese lacquer painter Nguyen Gia Tri, from his book Words on Creation, V?n Ngh? Publishers, Ho Chi Minh City, 2009
1978 – The achieved paintings are . . . important only when one is working on them . . . One must head towards other things.
1979 – With the lac-varnish, as with all other materials, one mustn’t oblige it to conform to one’s wish. On the contrary, one must have regard for the material, must understand it and follow its bent. Paintings showing local customs or landscapes prevent the artist from transmitting his emotion to viewers in other countries.
1980 – Having started to paint lacquer paintings means one has already started to paint abstract ones. As it’s not real as in ordinary daily life. The lacquerer looks into his innermost feelings, and doesn’t look at the outer appearances of things.
The lacquerer paints a great deal, as the more he paints the more he becomes addicted to it. And each day he becomes even more addicted. And in this matter there exists no other material that can replace lacquer.
Lacquer painting requires a peculiar technique . . . which are not the habits applied in oil painting.
Vietnamese lacquer painting is a brand new technique. It has its own method.
In the past, upon seeing me working in lacquers, Mr I (painter Joseph Inguimberty), who was an oil painter, just couldn’t understand the question of ‘time’ in lacquer painting. He liked lacquer very much and quite wanted to try painting it, but each time he saw and met with lacquer, it immediately ‘ate’ him, so he had to give up.
Background colours, black over vermilion, red over black, black over silver …
With lacquers, it’s a question of the smoothness of the surface, the degree of brightness.
1981 – Lacquer painting requires an absolutely smooth surface. Even if there is only a tiny scratch, while rubbing carbon powder, one must rub anew.
In my second academic year, I could no longer abide the school and had to give up. Later on, as the lacquer-painting department was founded, I returned. The academy-figure hour in the morning was for me a torture. I eagerly waited for the afternoon to work in lacquer painting.

From the collection of Mr Truong Thuan

Painting lacquers is like painting in the Middle Ages, because it requires a great deal of time.
A lacquer painting can be preserved for a long time, as long as possible, and the longer the better. While polishing and shining, the gold and silver remain intact.
Painting a lacquer work is difficult.
The painting doesn’t have only two dimensions, as it has profundity, the painter’s.
Lacquer has its particular ‘justification’.
Each one of my paintings is only an exercise I’ve given myself.
1982 – Silvery, red-brown paint (called cánh gián in Vietnamese, resembles the colour of a cockroach wing).
One cannot coerce lacquer. Sometimes one has to please the painting.
Lacquer has its own laws.
One must look at the lacquer with its own eyes.
1983 – There is a kind of red-brown that isn’t transparent, and when shined it doesn’t become brilliant.
It would be wearing if all lacquers shone similarly.
With lacquer, one sees a new world, wide open before one’s eyes.
Vermilion, gold, silver, eggshell.
1984 – An eggshell painting represents an equality between eggshell, gold, silver and coloured paints.
Black paint is precious because it’s brazen and has the blue gleam of iron.
The main subject is the lacquer.
Compared with red-brown, black, vermilion, gold and silver, eggshell is a strange and somewhat difficult material. Causing the eggshell to turn soft and harmonize in a lively way with lacquer colours and materials is very difficult. One can say that it’s the most difficult thing in the technique of lacquer painting.
Working in lacquer is aimed at understanding its vital rhythm.
The smoothness of lacquer is a lively smoothness.
I have worked in lacquer since it first appeared, so I am the same age as lacquer paintings.
Lacquer is a local product of Vietnam.
1985 – The place where the patron saint of lacquer painting, Tr?n T??ng Công, is worshipped is in Bình V?ng village.
The H??ng (Perfume) Pagoda loses its beauty when turned into a touristic site. It also loses its traditional and sacred aspect.
1987 – Japan has all necessary means for lacquer painting, but it doesn’t have a modern lacquer art . . .Lacquer painting is difficult as it has many layers.
1988 – Polish naturally to obtain smoothness. Fill in and patch places that are broken.
A lacquer must be left for a long time to permeate.
1989 – While shining the lacquer, one chafes regularly, then, at a certain moment, everything turns dazzling.
While shining, chafe the lacquer as a whole. Don’t distinguish or pay particularly attention on any spot. Everything must be on an equal footing.
One can insert the eggshell horizontally, vertically, backwards or forwards, as one wishes.
With lacquer, one must just go ahead and work, and it’ll change itself.

With his more than one half-century’s painting career, Nguyen Gia Tri (born 1909-1993) is one of the two or three stars in modern lacquer painting in Vietnam.
A traditional medium which has existed for centuries in this country (processed from the resin of Rhus succedonea, a plant grown extensively in North Vietnam), pumice lacquer, however, was used in the past merely as a material to decorate communal houses, pagodas and home furniture. Only in the 30’s, did some young Vietnam artists (Tran Quang Tran Nguyen Do Cung, Pham Hau …), especially Nguyen Gia Tri, see in it the promise of an enchanting horizon.
Nguyen Gia Tri’s lacquer painting world is the glorious, fairy reverberation, not of real life, but of a faraway, fancy-wrought realm. With a powerful, thrilling palette, the luster on his painting is resplendent, religious (gold, silver …) and at the same time, penetrating and jade-like (vermillion, black lacquer, egg-shell …). His painting does not describe everyday realities, but carries you into a nebulous world of mirage, providing you with an evasion into the imaginary.
That is his encounter, delayed yet not fortuitous, with the Western modern style. His painting is not devoid of symbolist, surrealist or abstract elements. This can be perceived in fine arts museums and private collections in Vietnam and the world.
An artist withdrawn within himself all his life, feeling no need to display his work, Nguyen Gia Tri’s aesthetic sensitivity consist in that he has succeeded in identifying a painting medium with a pictorial life which is its own.
Those natural landscapes, those flowery girls – dream or reality? – in a light now rubiate, now flame-yellow, leave you mushing as if lost in some myth of childhood. Then, when you take your eyes from his paintings, you’d be filled as with a nostalgia for a faraway past or for some sparkling dream you once dreamt.
Nguyen Gia Tri’s artistic quest is no without resentment against himself. And since the 50’s, he became entirely given to the abstract tendency. Abstractionism, he said, is a real inner impulse which has been imperiously prodding on in his aesthetic subconscious since long. And this is the ultimate stage of his painting career.