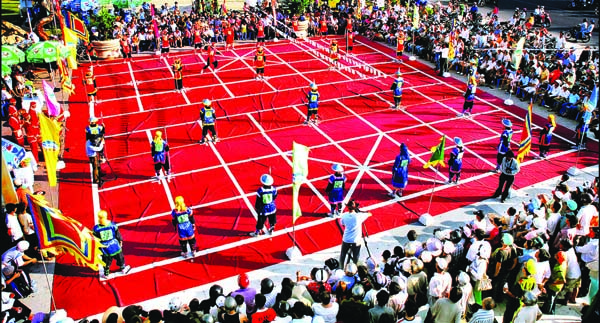 Human chess is one of the original folk games that takes place during festive occasions in Vietnam in general and the North in specifically, especially during the lunar New Year.
Human chess is an actual chess game in which humans replace the chess pieces. The chess board is drawn on a clearing or a temple courtyard. A game begins with all 32 chess pieces, including 16 young men and 16 girls.
Those are good mannered, good looking young men and women from good, well respected families. Beside the pieces on the board and two players, any game must have a game master, who is also the arbitrator.
The young men wear red or yellow dresses, while the young girls wear black or green. The outfits must be perfectly neat and tidy, representing the corresponding chess piece. The King wears King’s headwear and footwear. The mandarins wear caps with dragonfly wings and golden tassels. Before each game the “chess pieces” must train stances and martial moves and skills to demonstrate in each situation. The training is usually as strenuous as real military or circus training.
At the announcement, the teams ceremonially march into the board under music and drum accompaniment. The board set, two players in scholar dress come out under a roll of drums, a five-color command flag in their hand. They clearly introduce themselves. As a rule, the red side takes the first move, then the green side, and so on. They take turn to move until the checkmate. Every time a piece of one side eliminates a piece of the other side, the two show a sparring scene with the attacking side winning. The human chess game goes on, lively and breathtaking.
Spreading to Ho Chi Minh City by innovations of matial art master Ho Tuong, the chess pieces carry weapons and sit in the board. A large mat is spread between the two sides or in a big clearing. When a piece of one side eliminates a piece of the other side, the two imitate a real fight with beautiful martial moves on the mat to passionate cheering of the spectators. A commentator describes the moves on a loudspeaker so that everybody can appreciate the players’ skills.
The human chess shows of Master Vo Tuong are really a sight to see, and the team has quickly becomes famous. They are invited to perform everywhere in the Middle and South of Vietnam. From a single show team, since 2007 Master Vo Tuong already has three human chess show teams headed by his disciples to satisfy the ever-increasing demands of the spectators everywhere. For those contributions, Master Vo Tuong is considered the man who restored and developed the genre of human chess martial art in Ho Chi Minh City and in Vietnam.