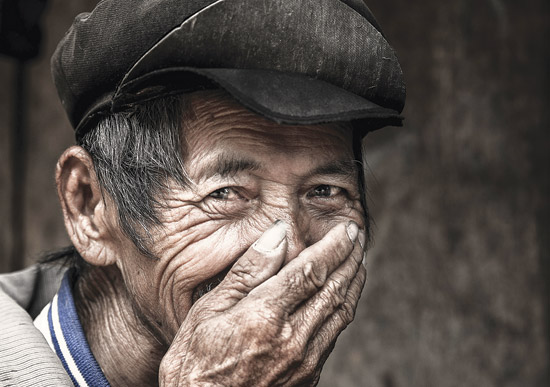 Beautiful landmarks and sceneries are not enough to attract Rehahn, a native French photographer, who released his first photo book, ‘Vietnam: Mosaic of Contrasts’ early this year. It’s the people, or to be more specific, it’s the elderly and young children, that Rehahn captures through his lens.
Born and raised in France, Rehahn Croquevielle has a passion for travelling. He has visited many places around the world in his 34 years. However, it was only seven years ago, when he first set foot in Vietnam during a volunteer trip to help needy children, that he felt this land could be his second home. He finally settled in Vietnam two years ago.
It’s normal for any foreigner wishing to reside in Vietnam to choose a large urban city such as Ho Chi Minh City, Danang, or Hanoi. Yet, for Rehahn, it’s Hoi An, a small town but one full of Vietnam’s culture, that has captured his heart. Rehahn’s decision to settle in Hoi An is mainly due to his love for the people here. To him, the slow pace of this town allows him to fully experience what it’s like to live authentically. As a result, Rehahn seeks truth out through his camera lens during his road-trips in the countryside of Vietnam. According to Rehahn, he is most fascinated when he is able to preserve the images of elders and young children. Looking at Rehahn’s new book, the majority of photos feature the very young and the very old, because Rehahn believes that the elders’ lines and wrinkles tell their life’s stories, while children bring out their innocence and honesty through their smiles. Moreover, the eyes of everyone in Rehahn’s photos help bring soul into the artwork. Behind every photo are also memories and stories that the photographer has encountered during his interaction with each character. He cherishes the moment when he gets to meet people, have conversation with them, and learn about their lives. It’s only these interactions that make it possible for him to explore his subjects and extract the most truth out of every shot he takes. As a result, Rehahn’s photo book reflects many facets of the Vietnamese, some of which are unknown to most foreigners and even some natives.
Travelling to many places around Vietnam with his motorbike and camera, Rehahn captures what he feels is right and most accurately depicts the people of this country. It took the photographer a total of seven years of travelling around Vietnam to finally decide to release his first book. ‘It was the hardest decision because I have to pick and choose about 150 out of my 30,000 photos I have taken so far since I’ve learned about Vietnam,’ said Rehahn. Finding the right printing company and coming up with layout for the book are also some of the tough decisions Rehahn has encountered, as he did not know how and where to find the best or most suitable publisher. Yet, with help from the Internet and friends around the world and in Vietnam, Rehahn finally was able to connect with the resources that he needed in order to make his book dreams come true. Fans and clients from Europe, North America, and Asia are all eager to receive a copy of Rehahn’s new book. He has also been interview by both national and international magazines such as Thanh Nien, Tuoi Tre and he has even been featured on National Geographic for his portrait style photography. Those who have travelled or lived in Vietnam are eager to see what the book is about, because it brings something different to viewers. It’s not the beautiful landscapes that everyone usually sees, or the landmarks, and or the war-torn photos. ‘Vietnam: Mosaic of Contrasts’ is purely a portrait of the people of Vietnam.