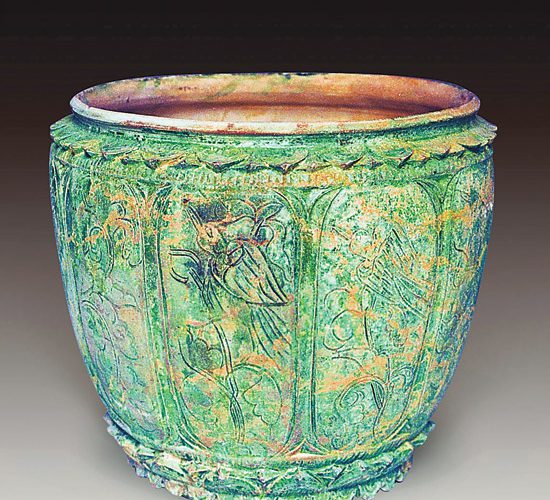 Vietnam Heritage has been publishing a series based on 2,000 Years of Vietnamese Ceramics by Nguyen Dinh Chien and Pham Quoc Quan, published by Vietnam National Museum of History, Hanoi, 2005.
This month, the topic is monochrome moss-green ceramics.
Green ceramics have a green glaze which is made from copper-oxide.
Chinese green ceramics appeared as early as the Tang period (618-906) with a thin, glassy and bright green glaze covering a body that is light, thin, white and porous. Many examples have been found along with white ceramics of Five Dynasties at sea estuaries in Northern Vietnam. Obviously, they were imported. However, most of them are bowls and dishes incised with boys among lotus scrolls. Ritual wares like lamp stands and incense burners are very rare.
Vietnamese green ceramics were first produced in the Ly period. Some topical examples are covered jars with lobed bodies, pedestal feet, and lotus petal collars on the shoulder and base. Many brown and ivory decorated jars in the Vietnam National Museum of History have also that form. Tran green ceramics have opaque, thick and erodible glaze due to low firing temperatures. Their bodies are not white, thin and porous like those of Tang.
In Vietnam, except for some bowls in the Vietnam National Museum of History, typical examples of Vietnamese green ceramics are rarely found in the collections of state museums. Instead, they turn up in private collections that reveal a variety of forms. Notable among these is a jar decorated with carps transforming into fairies playing flutes and flying amid clouds. This jar is regarded now as the finest and most representative example of Vietnamese covered jars in general, and green glazed jars in particular.
The 16th century green ceramics have a thicker and darker green glaze on a gray body. Fired to higher temperature, this glaze would not erode quickly. Typical examples are bowls and dishes carved with chrysanthemum and floral sprays. Some ewers have special forms such as fish with shrimp-shaped bodies or nghe (Chinese lion-dog) shaped knobs.
From the 19th to 20th century, porous stoneware with green glaze was produced at kilns of Lai Thieu (Binh Duong) and Hung Ky (Hanoi).