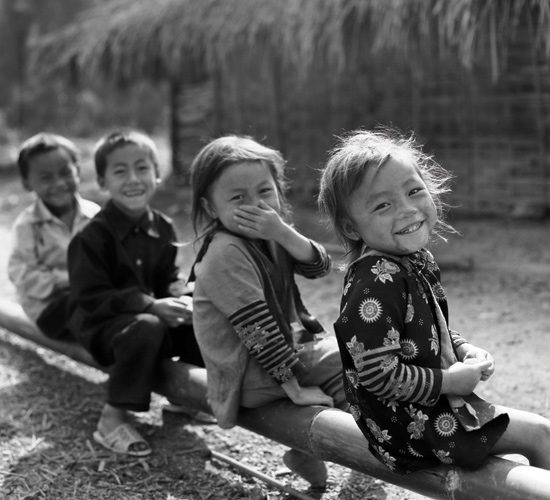 Photographer of the Hmong in the north and northwest

Can you give some background information on the pictures?
The pictures were taken at different times in different locations across the northern mountains, some in Dien Bien, some Son La, some Lai Chau, some Ha Giang, some Lao Cai. My subjects are mostly women and children. And exclusively Hmong people.

Why exclusively Hmong people?
Hmong people have a great mentality and vitality. The hard life on the mountains doesn’t affect their free way of thinking and the humane way they treat one another. Even in Sapa, where tourism is said to have spoiled the locals, kids tag along after tourists all day long; elderly ladies have been selling souvenirs for dozens of years; yet back in their village, they are still authentic Hmong, with the language, the costume, and the spiritual values.
Among Hmong people, I see more, I live more. They touch my heart. In them I see a very unique colour.
Hmong people are simple-minded and straightforward. If you visit them and they feel that you are ill-disposed they will go out of their way to turn you out. If they don’t want you to do something in their house but you go ahead and do it they may kill you. But once there is mutual understanding they can share with you everything they have. You give them a bag of candy and they can give you a pig in return.
Hmong’s is a hierarchical society, where the young respect and obey their elders. The community spirit is also very strong. On a recent trip to the northwest, I had three eggs for the travel rations. I stopped at a native family in Son La Province and gave them one egg. With a knife, all five members, men, women, adults and children, divided the egg into five even sections and distributed them among themselves.
Another time in a distant isolated village in Dien Bien Province I experienced a thing that brought tears to my eyes. I was starving and a Hmong family, poverty-stricken, shared with me their meagre meal.
Don’t look at their motorbike and think they are wealthy. The bike cost them the whole corn crop and there might be no food left in their house. Hmong people do whatever they like to do and don’t bother to think of tomorrow. Neither do they fear death. They only fear not being able to live up to their desires.
So the unique colour which I mentioned earlier is the colour of Buddhism, which I see in the concept of life and death and the spirit of sharing.

And why mostly women and children?
Women are the culture-keepers. Men have more exposure to modern facilities, such as cell phones, motorbikes, the majority’s language. Hmong women still plant flax and make linen; they still grow indigo and dye their traditional costumes.
The women work really hard. They do everything, from planting and harvesting the rice in the field to running the domestic errands. When they are tending the cattle, they embroider scarves; when they are going to the market, they split fibres.
I often joke that working with children gives me more fun because they are less tricky, especially Hmong children, born and raised in an almost isolated cultural environment, so they are even more immune and pure.

How often do you travel? To where? How? And at what time of the year?
I have combed the northern mountains, just the northern mountains. I have never even been to the Central Highlands.
I go everywhere by motorbike, and more often than not, by myself.
People go to Ha Giang in the mustard-flower season or to Moc Chau to see plums blooming or to Sapa to admire the terraced paddy fields turning golden. I don’t care which season it is. I go whenever I have saved enough money for the film and the gas. But I do prefer winter. The season inspires me the most. In the ubiquitous bleak grey I see the colour of life more vividly.