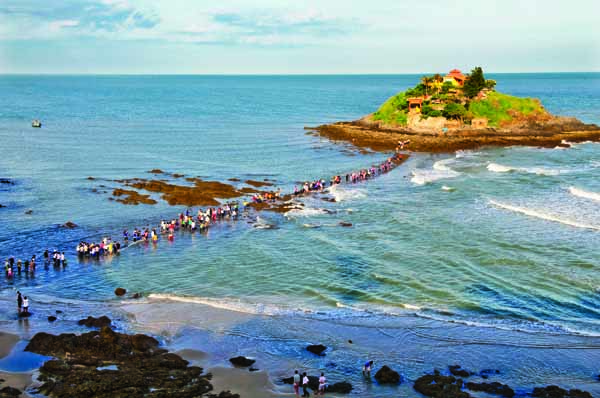 PATH TO A SACRED ISLAND

Among the many that have come to Vung Tau, few know that at low tide, a path emerges from under the water and connects the shore with a small islet, famous with the much-revered Hon Ba Shrine.

That 5,000m2 islet, named Hon Ba, is part of the Rear Bay of Vung Tau City, Ba Ria – Vung Tau Province. The city is about 120km to the east of Ho Chi Minh City.
Hon Ba Shrine is much revered by the people who live here and in adjacent provinces. They believe the host deity of Hon Ba Shrine is powerful and merciful. That’s why incense never buns out inside the shrine. Most of the people who come here are fishermen. They come to beg for favorable weather and big catches in seafaring trips.
It has been passed down that the shrine is dedicated to the Lady Dragon of the Sea, the Guardian goddess of fishermen.
An old story is still being passed around, that in 1939, a French officer named Archinard fired his gun at Hon Ba. He fired many shots, but only one hit the shrine’s outer corner. Later, the officer died by recklessly shooting his gun. After that, the French named the island Archinard, but Vung Tau people kept on using the name Hon Ba.
The shrine was built in 1881 and renovated in 1971. Currently it is 4m high, with an altar for offerings, and has a 6m long, 3m wide basement, which used to be a secret meeting place of resistance fighters during the liberation wars. Every year people conduct consecration rituals here 4 times in the 1st, 4th,7th and 10th lunar months.
Pilgrims and tourists can walk to Hon Ba at the time low tide. The water is the lowest at Hon Ba on the 14th and 15th days of lunar months.
The path leading to Hon Ba is very rocky, rugged and full of razor-sharp shells. So those who want to walk to the shrine should wear sturdy shoes and keep in mind that the path is available only for a few hours before the sea rises again. Visitor can also reach Hon Ba by boat when the path submerges under a meter or so of sea water.
Standing on Hon Ba, separated from the mundane everyday life, visitors can wholeheartedly enjoy the grandeur of the blue sky, blue sea, the murmur of water and bird chirping on age-old trees around the shrine.