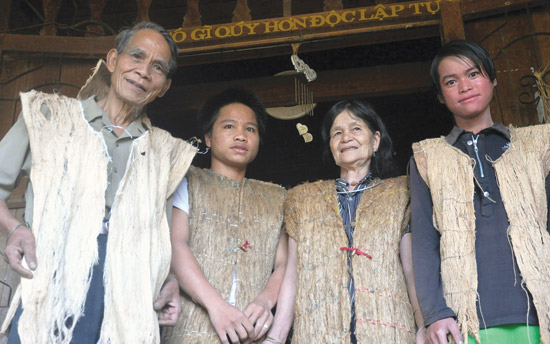 Made from trees, this unique protection is still used today

Since the times of legends, the Co Tu in the mighty mountains of Truong Son have been using bark as body armour to fight bad weather, beasts and enemies. Bark armour is a unique feature of this ethnicity.
Today, it can only be seen in the harvest and buffalo kill festivities of the highlanders, and that quite rarely. But once upon a time, it was almost the daily wear of Co Tu men-warriors in their quest for food and peace.
We went up to the Vietnam-Laos border in Tay Giang District, Quang Nam Province, to look for Co Tu bark armour, if any could be found. Po Ning Village of Lang Commune hung mysteriously between heaven and earth, among clouds.
Clau Nam was sharpening his arrows and spears to prepare for the village feast. Clau Nam is one of the most respected elders along the Tay Giang border area. His words are wisdom itself to everyone. He is also a legendary warrior from the Tay Giang wilderness.
Talking about his people’s armour, Nam’s eyes brightened. His 83-year-old legs are still strong and his eyes sharp. He is still roaming his mountains and forests every day to hunt, barefoot and wearing his body armour.
‘This bark is very strong. Arrows can’t pierce it, claws can’t tear it. It’s the heaven’s blessing for the Co Tu for our hunting in the forests,’ the elder Nam says as he puts on his armour, which has accompanied him almost all his life.
The decades-old bark tissues are strong as new. Old Nam said, ‘Each and every bark coat is cherished by the villagers, because they are the recorders of history and legends of the past. Sitting still in ambush, it makes a warrior look like a rotten log. It even has great detoxifying power to protect our men from poisonous arrows of the enemies.’
In Po Ning Village, people still remember sagas from the French-Vietnamese War. Camouflaged in their bark armour, Co Tu men took down French soldiers with their poisonous arrows, forcing them to retreat in panic. The bark, along with bows and arrows and spears, has done its part to help protect the mountains and forests against the enemy’s modern weapons.
Old Nam couldn’t help being fascinated by the wisdom of his Co Tu ancestors, who devised this strong armour. Among the forest’s trees, Tr`rang, T’cong, T’ Dui, and A muot are used the most, because their bark is tough and durable. Especially the Tr`rang bark, which lasts for decades without tearing or rotting.
But because these trees usually grow only at the source of the Lang River, it takes much effort and time, sometimes weeks, to obtain.
Making the bark armour is a job for Co Tu men. First, they have to scour the mountains to find the trees, and only trunks the size of an average man’s torso are chosen. They cut two lines around the tree and use sticks to evenly beat the bark between the lines until it detaches itself from the wood inside.
The collected bark is then boiled, kept in water, dried and woven by strong hands into coats. But the Tr’rang’s bark has to be left the way it’s been taken from its trunk and sewed into a wearable form. It takes a Co Tu man almost a month to make his own armour.

Old A Lang Pech, a childhood friend of elder Clau Nam, said that the armour is the symbol of maturity and dignity that every young Co Tu man dreams to possess. Tr’rang bark coat feels warm in winter and cool in summer, and its odour drives away mosquitoes and leeches. Moreover, it is believed that Tr’rang bark coat makes you invisible to the beasts. However, this tree is very rare. There are only two trees left up the Lang River.
Old Nam said that Co Tu people don’t exhaust the mountains and forests. They only take the bark in summer, so the tree’s wound heals quickly and in autumn, the tree would be covered with new bark. It’s also the time when the bark is clean and quick to dry. That’s why the two Tr`rang trees can still supply enough bark for Po Ning villagers.
Elder Nam pulled out aged bark armour for the family to wear to demonstrate to his guests. In the upcoming festive events, the whole village will put on this armour to revive the scenes of ancient warriors fighting ferocious beasts and enemies to defend the people’s livelihood and peace.
* The Vietnamese version was printed on 2 November, 2014 on the Tien Phong
website