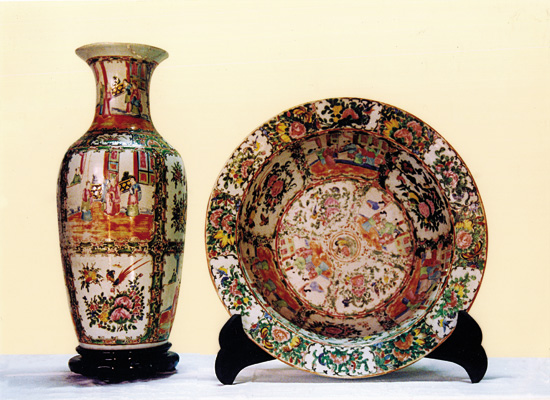 Old things stick to this family

Vietnam Heritage, August-September 2011 — The house at 80 Tran Phu Street, Hoi An, is a small museum with more than 3,000 artefacts the Diep family has been keeping for over a century-and-a-half.
The owner is Mr Diep Gia Tung, of the fifth generation of Mr Diep Ngo Xuan. Mr Tung said that according to his family tree Mr Xuan had come to Hoi An from Quang Dong, China, in 1856. He had set up a traditional medicine shop at what is now 80 Tran Phu. The shop had then begun to sell oil, silk and books.
Today the house displays, on the ground floor, ceramic items of China’s Tang, Song, Ming and Qing dynasties, earthenware from the first century BC, copper knives from the Bronze Age and a copper mirror from the first century. On the second floor are jars from the Kangxi Dynasty, Vietnamese Chu Dau ceramic bowls of the 12th century and a flower vase of the 18th century Qing Dynasty. There are also a wardrobe and a desk that belonged to Emperor Bao Dai, Vietnam’s last monarch, and a dressing table that belonged to his wife, Nam Phuong.
The museum has publications from Vietnam’s Nguyen Dynasty, a collection of seals collected over the past 100 years, books, land registers and agreements on houses belonging to former merchants in Hoi An, calligraphy and water-colour paintings.
The object Mr Tung talked about with greatest enthusiasm was a 300-year-old, gold-inlaid screen that he said had been made in Qing Dynasty China and been brought from China by his ancestor. A person from a foreign museum is said to have met Mr Tung and offered VND2 billion ($100,000) for the screen, in vain.
Mr Tung said, ‘The Diep family loves old objects. We just buy them, we never sell them.’
The objects must have been destined to enter the Diep family, he says, so he must respect and preserve them.