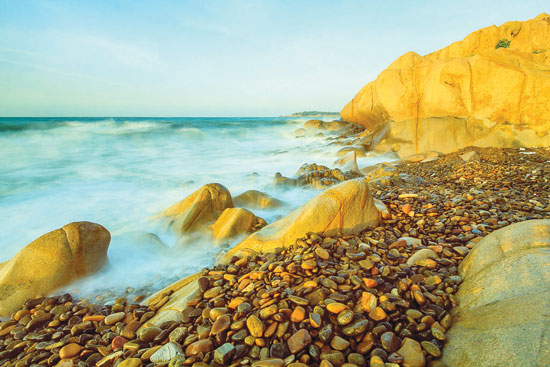 Binh Thanh Commune of Tuy Phong District, Binh Thuan Province, though occupying only 27,7 square kilometres, has two national cultural relics, including Co Thach Pagoda and Binh An Temple, which has a dozen structures with a regal appearance.
Apart from that, Binh Thanh also has the Lord of South Sea tomb, almost 200 years old, that houses a whale skeleton; a memorial of a massacre over 60 years ago; and a beach famous forseven-colour pebbles.
We drove 300 kilometres from Saigon to Lien Huong township of Tuy Phong, then turned to provincial road No.716 and went another 10 kilometres to reach Co Thach (Old Rock) Pagoda.

The old temple in a cave
Co Thach Pagoda is not big. It stands on a slope, about 64 metres above the sea.
According to the Vietnam Buddhist Association webpage, in the mid-19th century, Zen monk Bao Tang found a desolate shore cave in a spiritual land and decided to use it as his place of worship. A little later, to pay respect to his virtues, a rich man named Ho Cong Diem built a nice temple and named it Co Thach. Since then, the pagoda has passed to four generations of virtuous head monks and has been renovated many times.
â€˜Co Thach preserves many valuable cultural heritage items, which include highly sophisticated inscriptions, historical documents dating from the time the temple was established, and bells and drums made in early 19th century,â€™ according to the Tuy Phong District webpage.
In the five ha premises of Co Thach, there are many age-old trees and big rocks with Buddha statues on them.
â€˜The North-East slope behind the pagoda has many caves formed by large strange-looking rocks. Some caves are so deep that people thought they were the way to the underworld. Behind the three-doorgate is a cave formed by three rocks which look like a whale (a benevolent fish), a toad (representing chastity) and the Bat Nha boat that carries people to the Domain of Awakening. There are many altars inside the cave for AmitÄbha Trinity, Shakyamuni, Ksitigarbha, CunÃ¯dÃ¯hi and Bodhidharmaâ€™ according to the Vietnam Buddhist Association sources.

The seven-colour pebbles
Walking about 500 metres down from the pagoda, we came to the famous beach with billions of pebbles of different colours, including yellow, grey, black and white. The beach is about 1.5 kilometres long and 250 metres wide.
The waves come and go, making the pebbles knock against each other. Each time, it sounds like a beach of firecrackers. The pebbles shine all their glorious colours under the blazing sun.
Scientists say that an undersea current brought these pebbles and formed a nearly 250,000-cubic-metre opencast quarry.

The gruesome massacre
About 2.5 kilometres from Co Thach, there is a memorial for a gruesome massacre that happened over 60 years ago.
The stele relates that early morning of 20 February, 1951, a French regiment moved in to Cat Bay Village and opened fire. They killed 311 people, burned houses and raped many women.
Having burnt incense for the dead, we entered the village. Cat Bay with its few hundred roofs feels vaguely nostalgic.
80-year-old Duong Minh Thoi, one of the ten survivors, recalls the horror.
â€˜That morning, my family was having cassava for breakfast. Suddenly the legionnaires surrounded the village. A group of soldiers came to my house and shouted â€˜Everybody up! Out!â€™ All 12 of us huddled together inside in fear. They started shooting at us, and then burnt the houseâ€¦â€™
The frail old man added, because many families have no descendants to take care of the family altar, villagers contributed money to build the memorial in 2001. Since then, every first full moon, villagers collect rice, sugar and other items to make sacrificial sweets and come to the memorial to pray for the souls of the dead to reach salvation.n