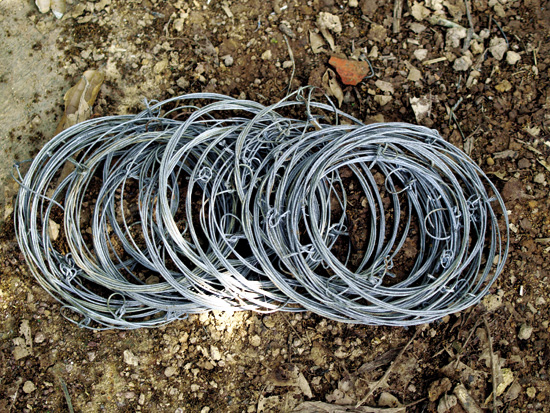 Nooses and a long fish trap

Vietnam Heritage, August-September 2011 — If you stepped on a b?y c?p or jawed trap, you would certainly receive an injury to the ankle, even break a bone, despite your hiking boots, the deputy head of the Rang Rang ranger station, in Vinh Cuu Nature Reserve, Dong Nai Province, Nguyen Van Nam, told me. Big animals like bison, swine or deer could not escape once in this kind of trap. Less dangerous for humans but not for animals was the noose trap. ‘Last week, a pig-tailed macaque (Maccaca leonis) weighing nearly ten kilos was stuck in this type of trap for two days and couldn’t escape until we found and saved it.’ The most destructive trap was the long fish trap, which was able to capture snakes, varans [a ‘varan’ is a kind of reptile] and small mammals, and not just fish.
The first rain of the rainy season had fallen on Vinh Cuu Nature Reserve and let drops of water wash away the heat and dust of a long dry season. Plants awakened after many thirsty days. Green budded on the branches of the hairy-leafed apitong Dipterocarpus alatus. First flowers of the Queen’s flower tree, Lagerstroemia speciosa, were blooming throughout the forests. It was time for certain animals to leave aestivation to find food for their empty stomachs, to drink water of the first rain, to breathe the smell of decayed leaves and to enact the reproduction season. When the rain filled the shallow streams, it was time for amphibians and reptiles to get out of their shelters and feed, for illegal hunters to set traps for wild animals.
After breakfast, we prepared compass, shoes, medicines, terrestrial-leech-resistant socks, water, knives and lunch for a trip to remove traps set in forests. At 7 a.m., we started a 20 km journey. The forest welcomed us with a dense brush of thorny dragon’s-blood palms. The thorns of the trees grabbed our legs, hands, clothes and faces as if they wanted to prevent us from stepping into the forest. After walking for more than two kilometres, we came to a chest-deep stream. Tuan swam to the other side and tied a rattan line to a big tree. Slowly we, one by one, crossed the turbid and strong-flowing water, thanks to the line.
At noon, when strong sun penetrated dense foliage, Tuan discovered the first trap. He pulled out metal-snippers for me to cut wires while he chopped rods with a massive knife. We removed 120 traps set in a series, luckily with no animal in them. Tired, we stopped to rest on a large rock and had lunch.
With a sigh, Nam said, ‘The reserve has just a small number of rangers to deal with the poachers. Each person has to manage a very large forest area of 25,000 ha.’
[Vietnam Heritage has since ascertained that anyone who would like to join in a trip and help destroy traps can contact the author of this article, tel: 0944679222, email: pmytrung@yahoo.com]
After destroying another series of traps five kilometres away, we found a long fish trap. Releasing fish, snakes and a small varans into the forest, we broke the trap into pieces because it was too big and heavy to carry to the ranger station.
We only stopped work to return to the station when the sun went down. It was time for the nocturnal animals to leave their shelters and start their risky adventures for food, facing not only predators in the forest and food rivals, but also numerous traps set by humans.
Among the methods of capturing wild animals, b?y c?p, or jawed trap is the strongest and most dangerous one. The trap has steel jaws with teeth and two powerful springs to grab the animal’s foot tightly when it steps on its plate. The trap is usually set on animal trails or at the forest edge where animals pass to eat crops. The trap is connected by a cable to a tree and camouflaged with a layer of dry leaves.
Noose traps are less dangerous but very effective in killing small carnivores. They are usually made from bicycle brake cables and a small tree that springs upright to hang the animal in its foliage. Noose traps are set into a series of 50 to 200 over a hundred metres.
The long fish trap is tens of metres long.

*Mr Phung My Trung, is a freelance researcher in biodiversity who works in the Dong Nai Province Customs Department, after 14 years in that province’s Forestry Department.n

Text and pictures by Phung My Trung*