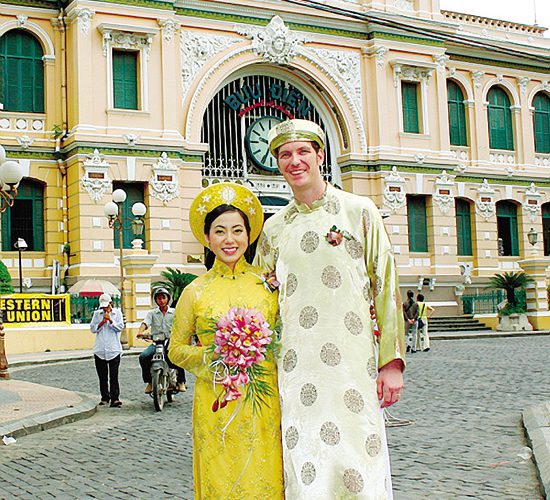 Vietnam Heritage, November-December 2011 — Some pointers from One-Hundred Things to Know about Vietnamese Traditions and Customs, by Tan Viet, National Culture Publishing House, Hanoi, 2001:
‘Name-inquiry meeting’ refers to the man’s family’s visit to the woman’s to ask the woman’s name and age. Today, it is called a ‘plighting visit’ or ‘marriage-proposal meeting’. In some areas, the term ‘marriage-proposal visit’ is used.
Before 1945 (when the last emperor’s rule ended), in many rural areas, girls didn’t have a name until they got married (if their parents did not let them go to school). It was not necessary for girls to be included in their parents’ family book or the village book. Girls were not given school education, so it was not necessary for them to have names.
At the name-inquiry meeting, a girl was given a name to be written in the marriage certificate. Sometimes a girl did not know the name. At the meeting, the man’s family would ask about the girl’s age, so the two families looked in almanacs to see if their ages were good for each other.
In feudalism, marriages were arranged by the parents. The father was the head of the family and made decisions on everything, and the mother obeyed.
Some brides cried because they were forced to marry a man they did not like. Some feared how hard it would be to live and work like a servant in her husband’s family.
The bride’s mother sometimes cried because the girl had to get married at a very young age and was still naïve. Sometimes bride and mother left the groom’s family secretly during a party. People began to learn from these incidents and they stopped letting the bride’s mother escort her to the groom’s family on the wedding day.
A hairpin or needle was included in a box of gifts the mother gave her daughter on her wedding day in case the husband passed out or died after reaching orgasm, having become tired and emotional and somewhat drunk over several busy days of running east and west to get everything done for the wedding.
Whatever she does the wife must not push her husband aside, according to traditional experience, but can use a hairpin or needle to sting a spot just behind his anus to help him regain consciousness.
In the past, a girl usually got married when she was 13, while the boy was 16.
The bridesmaid had to be the girl’s aunt or older sister who could show the young bride what to do. The bridesmaid qualified if she was lucky in her life, had healthy and obedient children and a happy marriage.
The bridesmaid sometimes had to stay with the bride for a week.
In the past, grooms did not have a best man. Now, in some places, there are several bridesmaids and best men.