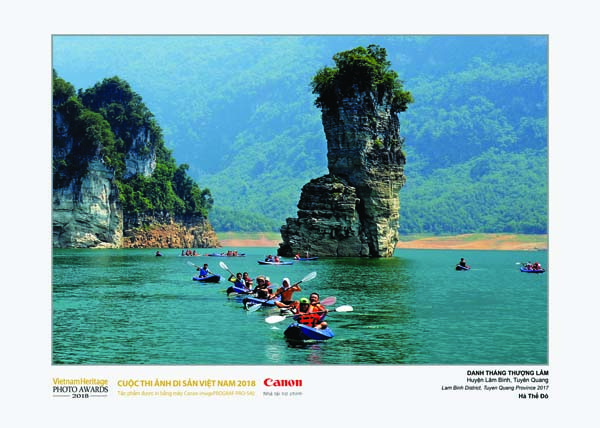 In early 2019, Na Hang â€“ Lam Binh Nature Reserve in Tuyen Quang Province was recognized as a â€œNational Special Scenic Attraction.â€ Located in Na Hang and Lam Binh districts, 250km from Hanoi, this 40,000ha attraction has 33,061ha of forests and 8,000ha of lakes.
Multiple lakes densely surrounding karsts help diversify wildlife in the Na Hang â€“ Lam Binh forests with 1,162 floral species and 430 fauna species, including black snub-nosed monkeys, which can be found only in Vietnam.
Scientists have also found in the caves within the Na Hang â€“ Lam Binh forests traces of prehistoric people. During the recent historical period, many of the caves within the reserve were used as military camps, offices and weapon production factories of the Vietnamese army in the wars against the French and Americans.
Today, about 15 ethnic minorities live in the forests of Na Hang â€“ Lam Binh with their unique culture, making it a diverse cultural environment.
With the above mentioned natural, historical and cultural characteristics the Na Hang â€“ Lam Binh Nature Reserve has many secrets waiting for visitors to uncover.
According to the authorities of Tuyen Quang Province, the nature reserve has 52 spots for tourists to visit, including 32 scenic places, seven archaeological relics, nine vestiges of architecture and arts, and four cultural heritage sites. A dozen of these spots have been ranked national attractions or relics.

The most notable spots
99 Thuong Lam peaks in Thuong Lam Commune of Lam Binh District is one of the most beautiful places in the reserve, about 15km from the Lam Binh District township. The 99 peaks are not only picturesque, but also related to a mythological legend.
Song Long Cave of Khuon Ha Commune of Lam Binh District is bigger and more beautiful among the caves of the reserve. The 200m- long cave is about 50m wide with the ceiling 40m high, full of mysterious-looking and magnificent stalactites that look like chandeliers.
Phia Muon Cave, an archaeological relic in Son Phu Commune is about 7km from Na Hang township. This is the dwelling space and graveyard of prehistoric people. In this cave, scientists found sophisticated stone tools and graves dated 3500 â€“ 4500 years ago. Visitors to Phia Muon cave will see dozens of such graves of the post-Neolithic times and the dwelling of people of that ancient era.
Age-old villages of the Tay people such as those of Dong Da, Ban Khe, Bang Giong, Na Ta etc. are purely Tay villages where Tay people maintain their ancient lifestyle, customs and culture. Each village is a group of ancient stilted houses standing at a foothill near terraced paddy fields, creating a peaceful and poetic scenery. People live by growing rice, domestic animals, and weaving traditional brocades. To many, the image of Tay women in traditional garments sitting by an old loom is a symbol of this land.

Text by Khanh Le; Photos by Ha The Do