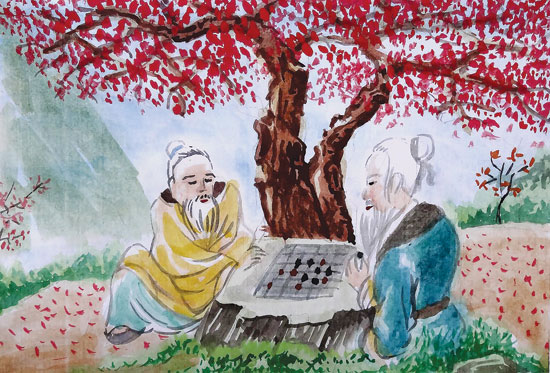 T?t comes when every Vietnamese family showcases an apricot (in the South) or peach (in the North) tree. No one remembers why these trees are brought into the houses every time New Year is nearing. Some say that apricot tree represents good luck for the whole year, and peach tree has the power of keeping ghosts and demons away and bringing peace, happiness and prosperity to the host family.

Northern peach blossom legend:
Once upon a time on Sóc S?n Mountain there was a very big peach tree, which belonged to two wizards named Trà and U?t L?y. Their power was so great that ghosts and demons around dared not come near to disturb peaceful and prospering life of the people in the area. But as each year ended and the wizards were summoned to heaven, the evil spirits flocked to cause havoc all around.
Back from the heaven, learning about the incidents, the wizards advised the people, “From now on, each time we are gone at year end, you must take a branch of blossoming peach to plant at home. Seeing it, the evil spirits will think that we are there and so won’t dare to disturb you again.” Following the wizards’ advice, at year’s end, people cut a peach branch to put in a vase at home to keep the evil spirits away. Some even pull up a whole tree to plant at home in hope of never having to worry about them again.

Southern apricot blossom legend:
Once upon a time, there was a girl named Mai (Apricot), daughter of a brave hunter. Under her father’s training, at fourteen, she became a great warrior, mature in martial arts. At the time, a monster was causing destruction and sorrow in a region and the people put up a big reward for anyone who could kill it.

So the hunter took Mai to go and kill the monster. Job well done, the father and daughter fame spread all over around. A few years later, the father became seriously ill. But at eighteen, the daughter grew strong and became a virtuoso of all fighting arts.
That year a giant snake appeared in another place, and the people there came to beg the hunter and his daughter for help. Before their departure, Mai’s mother gave her a beautiful bright yellow silk dress and Mai promised to wear it on the way back so her mom could see her from afar. The father and daughter went through mountains and rivers and found the monster. But the father was too feeble and Mai had to fight the giant snake alone. She finally killed it, but in the last contraction it managed to choke her dead in its coil.

Admiring the girl’s chivalry and pitying her mother’s crushing grief, the God of family begged the King of Heaven to let Mai live and rejoin her family for nine days. Since then, every year, she comes back to her family on the 28th of the last lunar month and vanishes on the 6th of the first lunar month. Later, after her parents and relatives died, she never came again but turned into a flowering tree next to the shrine people built to pay tribute to her soul. Seeing a pretty tree that blossomed during the nine days of New Year celebration, people named it Mai and took its branches to plant at home, believing that it could keep evil spirits away and bring good luck to the household in the coming year.
The folk tales reflect the utmost aspirations of the ancient Vi?t people yearning for peace, prosperity and happiness. Those are the perpetual dreams of mankind. As plants, the peach and apricot trees are no more sacred than any other. But as a spiritual heritage of Vi?t people, they should be preserved for future generations because the tradition is full of beauty and meaning. It’s the traditional T?t icon, a cultural value of the Vi?t people since the beginning of time and hopefully, will remain so forever.n