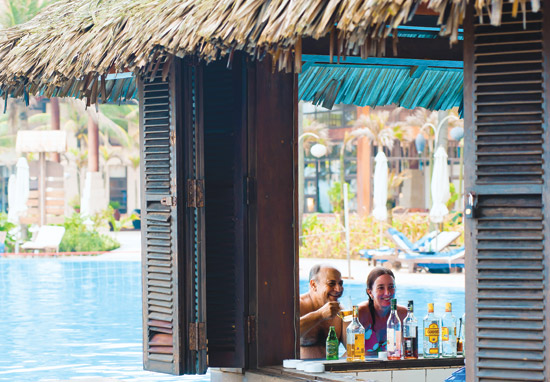 I sat under the beach umbrella with its thatched roof and drowsily contemplated the sea. Its endless murmurings sounded like the chanting of a group of monks, the waves turning over one another like the flicking of so many prayer beads in a continuous orison to gods of restfulness. A deep calm settled over me-or did it rise up from within in response to this earthly paradise? Either way, I know for certain that the Swiss-Belhotel Golden Sand Resort & Spa, near Hoi An, was responsible for the serene tranquillity that pervaded my senses.
The inside of the Swiss-bel is a study in tan and white, with airy wooden pillars that gave the dining area a grand feeling without sacrificing the sense of cosiness and intimacy.
Upon my arrival, I was shown to my room, where a complimentary basket of exotic fruits awaited, and I sank into more than one luscious piece of produce, my mouth dripping with refreshing juices.
My room was equipped with a safe deposit box, satellite TV, tea and coffee-making facilities, mini bar, an attached bathroom and a hairdryer. These amenities were but sublime icing on an already perfect cake; the atmosphere of the place had already begun to cast its spell on me.
Thus refreshed, I gambolled about the resort, noting exercise facilities, pool tables, and tennis courts. There were mountain bikes for rent, a spa and massage centre, and a kidsâ€™ area. What I wanted most was to sit next to the water, and the resort happily fulfilled that desire. In short order, I was ensconced in a hammock stretched between two stout palm trees whose broad leaves danced in time to the relentless metronome of the waves.

The sun dipped low, embracing the horizon and then quenched itself in the East Sea. The sky went from aquamarine to turquoise to midnight blue, and I headed to my room, with its stunning view of the ocean. Walking along next to the palm-tree lined pools, I saw the resortâ€™s multi-hued lights reflected in the water, making a pastel rainbow kingdom where I imagined mere-folk might frolic.
The staff at the Swiss-bel is the stuff of customer service legend. Mr Coyle, the manager, personally highlighted all the resort had to offer. But it was Ms Anh who helped me fully appreciate the charms of the place. When she had discovered that I had never before had a massage, she gladly performed her relaxing magic on me. Her fingers bore such strength and dexterity, I marvelled at how someone so diminutive could command so much power.
Ms Anh also treated me to dinner at the on-site Italian restaurant. The traditional pizza was a good as I had enjoyed in Italy. The chocolate mousse was exquisite. When I was scraping the dish to salvage a little more of this delicious treat, the server asked me, â€˜How about another?â€™ I was happy to accept the offer.
It was with much reluctance and a heavy heart that I said goodbye the next day. I have decided that should I ever find myself in possession of a chest of pirate gold, I shall at once sell it to live out the rest of my days trying to understand the whispering of the waves at the Swiss-bel.

Story by Willam Sabino and Rewritten by Erik Johnson