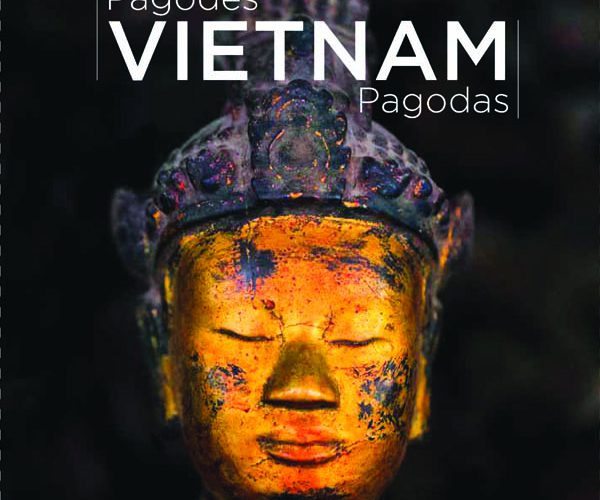 Halls of worship: A photo-album by which to appreciate them

At a festival at Ang Pagoda, Tra Vinh Province

Musician and monk walking around the Ang Pagoda in a festival, Tra Vinh Pagoda

Vietnam, thy name is diversity. Geography and history have conspired to weave a rich tapestry in thee. This wealth flourishes in many areas, from its cuisine of myriad dishes, to its ethnic diversity of fifty-four groups of people to her arts and architectural styles. Religion is certainly no exception. Adherents of all the major world religions are to be found here and additionally, some home-grown ones down in the Mekong Delta. I was happy to note the recent publication of a photo album of a key aspect of Vietnamese heritage; namely its pagodas. Here, too, there is rich variation in architectural styles, artistic embellishments and the daily life of monks and worshipers. This is all beautifully depicted in M. Nicolas Cornet’s book entitled simply, ‘Vietnam Pagodas’.
I was lucky enough to attend a presentation on the book given by the author himself so this review is based not only on my impressions but also on his intentions. For example, Nicolas stated his motivation for producing his tome came from his going to visit the ancient temple of Phat Thich, only to find they had knocked it down and were rebuilding it from scratch. Thankfully since then, policy has changed and now renovation actually means renovation, not demolition. From this shock, Nicolas decided that there was a need to provide a photographic record of the country’s pagoda heritage for future generations.
Firstly, the book is a journey from the North to the South of the country. The first two chapters are on pagodas in the north, where Vietnam began and where Buddhism first took root in the country. The first chapter is on the very oldest of the pagodas. The second chapter moves on to other important pagodas representative of the Northern style. Chapter three is devoted to what many people would consider the capital of Vietnamese Buddhism – Ancient Hue. The fourth chapter follows the Southern style and in particular the pagodas of the Saigon. It includes not only Buddhist pagodas, but temples devoted to Chinese deities. For the final chapter, we reach the last region to come part of Vietnam – the Mekong Delta. As such, it is mainly concerned with the Khmer style.
In terms of architecture, every pagoda in Vietnam has its own beauty. They all embrace Mother Nature, either in their settings or their gardens. The Perfume Pagoda in the North, for example, is located in a huge cavern in a mountain and the Ba Den pagoda of Tay Ninh in the South half way up a jungle clad mountain. Nature, Heritage and Religion in Vietnam form a mighty trinity. However, most would agree that it is the Khmer pagodas with their gold leaf roofs, long tapering snake head ends and colourful tiles of intricate design that take first prize for pulchritude.
I agree with Nicolas regarding the ‘interior design’. It is much finer to view art in situ, in the pagodas themselves, rather than as pieces in a museum. Hopefully, conservation efforts will keep them in their rightful places. The art is all around. A lot of places have very detailed wooden carvings on doors and columns and beams and roof interiors. Rarer are carvings in stone. Engraved ceramic tiles is another medium celebrated by Nicholas. There are bronze Buddhas, one of which is modeled on a very Vietnamese-looking face and is used as the cover page. Lastly, Chinese calligraphy, texts and religious quotations have not escaped the photographer’s eye.
Finally, Nicolas’ photographic eye focuses delightfully on the human aspect of the daily life of these pagodas. The monks are pictured on duty and at prayer with their brightly-coloured flowing robes, standing enigmatically at doorways, at study on doors and even young novices out in the courtyard playing soccer. There is an intriguing two-page spread of a monk celebrating his sixty years of being a monk with his colleagues showering petals all over him. We are shown that there is never a dull moment in these places. Women are bringing trays of food for the monks. The crowds are out on festive days and the special days of the lunar month. People even sleep in the pagodas. And even the deceased are here – at least that is to say their photographs are.
One thing that pleases Nicholas is that he was able to raise his sponsorship money from Vietnamese companies both large and small rather than use public funds. Of course, they get the benefits of publicity and public goodwill, but it is good to see the Vietnamese themselves willing to pay money to back up their heritage.
At the end of the book, there is a useful list of the names and addresses of the thirty-one pagodas and temples showcased as well as a list of the sources used and quoted. The current edition is with text in English and French. By the end of the year, it is planned to have another available in English and Vietnamese.
An exhibition was held over ten days in early June of forty nine prints from the book at the Saigon Fine Arts Museum. If you are lucky enough to be in Hanoi in November, this will take place there also.
I hope you get the chance to appreciate this wonderful, colourful book. If you have not already done so I hope it will inspire you to visit the actual pagodas. Furthermore, I hope your children and children’s children and your children’s children’s children will get the same opportunity. It was with this in mind, I know, that M.Cornet put so much time and effort into producing his work of 250 pages.

‘Vietnam Pagodas’ by Nicolas Cornet is published in hardback by Vietnam News Agency Publishing House, Ho Chi Minh City. It is available for purchase at Nam Phong Bookshop 88 Truong Dinh St, District 1, HCMC. It will also be in selected shops in Hanoi from late June. The price is VND950,000.