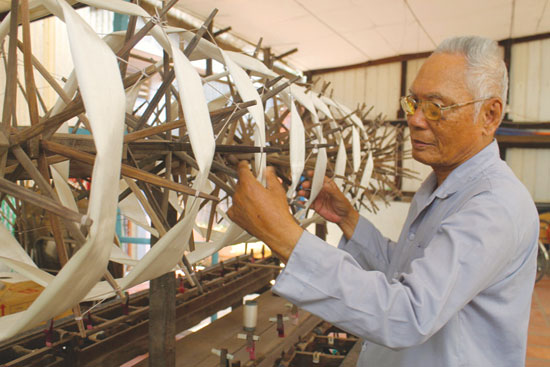 ­Mr Tam Lang. Photo: Dang Huynh
T  he silk village of Tan Chau, in Tan Chau County of An Giang Province, lies on the bank of the Tien River. 86-year-old artist Nguyen Van Long, often called Tam Lang, is an old-timer in this region. However, even he doesn’t know exactly from when the craft village has existed. He only knows that as he grew up, he saw his grandmother, mother and sisters spinning and weaving silk, while his father dyed it with the fruit of Diospyros mollis (mac nua); that is the fruit of a variety of ebony. The image of girls wearing jet-black Lanh My A silk in the morning sunlight has hitherto remained an unfading impression in his mind. Mr Tam Lang related that, during the mid-twentieth-century, the Tan Chau silk village was equal in comparison to the three other silk villages of Ha Dong (Hanoi), Hoi An (Quang Nam Province) and Bao Loc (Lam Dong Province).
Tan Chau silk, famously called  Lanh My A, is woven from silk threads and is only jet-black in colour and does not easily fade.  The roll of shiny, soft and cool-to-wear silk is not elastic, and it has been the dream so many women of the times. To mention Lanh My A silk, one must speak of the particular skill of dyeing colours from ebony fruit. When Lanh My A silk is woven, it comes out as white, and then is steeped in a solution made from smashed fruit in clean water. The solution is a dull white, but, once the silk is soaked, it comes out an opaque ebony. To create a piece of Lanh My A silk, the craftsmen must spend more than a month on tasks like soaking the silk in ebony water and wringing and putting the silk out to dry, after which the craftsmen go on to do more.
Holding a pile of silk in his hands, Mr Tam Lang spoke about the past. Because the textile frame was rudimentary, it was only 4 decimetres in size. The textile workers had to connect and put together many seams, so it wasn’t very beautiful. After numerous improvements and the passage of close to 40 years, Lanh My A silk came to reach a size of 9 decimetres.
When the craft of producing Tan Chau silk flourished from 1930 to 1970, nearly all of Tan Chau Village’s people made a living from the craft of cultivating silk cocoons and weaving silk threads. Wherever one went, one saw verdant gardens and the roots of ebony fruit.  All day, the village bustled with the clatter of shuttles working, the beating of the goods and the weaving of silk. Each courtyard was filled with stretches of ebony silk that shone brightly beneath the matutinal sun. Lanh My A silk is not just favoured by consumers within the country, but it is also exported to Cambodia, France, and a number of European countries.
In 1987, due to the competitiveness of composite fabrics, the market for Tan Chau silk gradually diminished. The Tan Chau silk village also fell into decline. People abandoned the trade; others turned to weaving nylon fabrics and embroidery. However, Mr Tam Lang continued to be drawn away by Lanh My A’s ebony colour.

Drying silk cloths in the sun

Three generations of Tam Lang’s family of craftsmen have pursued the trade of cultivating silk cocoons and weaving silk. As for Tam Lang himself, in his youth he made his livelihood by buying ebony fruits in Cambodia and returning to sell them to silk sewing establishments and dyers. During the 1990’s, Mr Tam Lang purchased and gathered textile machinery and silk cocoons from folks in the village to return with and open a Lanh My A silk factory.
Tam Lang still remembers meeting a French woman who went by the name Rose, who was a fashion designer and businesswoman in fabrics in Paris. Ms Rose had gone to numerous places with developed technology for cultivating silk cocoons and sewing silk fabrics, places like Thailand and Taiwan as well as many localities in Vietnam. However, it was Lanh My A silk that won over Ms Rose. She purchased orders of Lanh My A silk in great quantities. The only thing that troubled her was why Lanh My A silk was only ebony in colour. Her concern turned into the disquietude of Mr Tam Lang and his son. After many sleepless nights, Nguyen Huu Tri, Mr Tam Lang’s youngest son, went to embroidery villages of the people of the Mekong Delta, the Central Highlands, and even all the way to Cambodia in order to find and learn the secrets of dyeing. After many unsuccessful attempts to dye with materials like leaves, roots, fruits, and jungle tree bark that may have come out brilliantly for embroidery, but would not lend dyes to Lanh My A silk—the colours faded, lost their shine, or even caused the fabric to shrivel up—and experimenting with different environments, temperatures, and methods of dyeing, Tam Lang and his son finally realized their dream of discovering how to lend coloration to Lanh My A silk. Piles of Lanh My A silk fabrics in the colours of amber, lotus petal, clayish, indigo, and ash appeared, to the surprise of all the craftsmen of the silk-making trade in Tan Chau.
‘I will never forget the day when my own silks were displayed on the world fashion stage’, Mr Tam Lang, said emotionally.  It was 2004 when the designer Vo Viet Chung chose Lanh My A silk as the medium for his collection ‘Dreaming of Asia’, which was presented at the ‘Week-Long Festival of World Fashions’ in Kuala Lumpur, Malaysia. One year later, Vo Viet Chung again used Tan Chau silk to carry out his collection ‘Return to Life’ at the ‘Week-Long Festival of European Fashion’ in Germany, and the artist became the talk throughout the fashion sphere.
‘That’s how it was.  For a golden moment [Lanh My A silk] was revived, only to pass away again. Nowadays, people sew nylon silk, and Lanh My A silk becomes rarer day by day’, Mr Tam Lang said. The reason that he was able to maintain the trade was that he has fixed clients outside the country. Every year, he sews and exports 2,000 metres of Lanh My A silk. Tan Chau silk village was recognized as a trade village in 2006. However, these days, only a few households sew embroidery and fabrics made of nylon silk. The trade of spinning silk and cultivating silkworms and silk
cocoons no longer remains.n