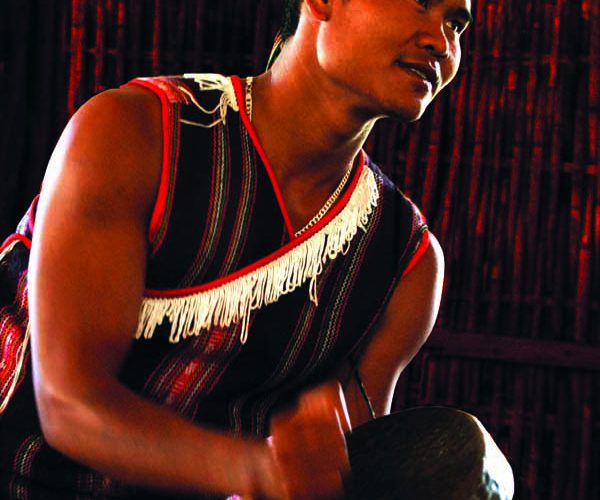 On 25 November, 2005, The United Nations Educational Scientific and Cultural Organization officially included the gong culture of the Tay Nguyen people into the Representative List of the Intangible Cultural Heritage of Humanity.
The Tay Nguyen gong culture area spans the five provinces of Kon Tum, Gia Lai, Dak Lak, Dak Nong, and Lam Dong. It is a cultural genre unique to ethnicities of Bana, Xedang, Mnong, Coho, Romam, Ede and Giarai that live there.
Experts say that gongs are perhaps descendants of stone instruments which were used during the primeval times in every event of family and community life of the Tay Nguyen people. Gongs are the main ceremonial instruments in all events, from the infant ear-blowing ritual to the grave abandonment ritual, from water pipe divinization to new rice blessing, from shed shut-down to buffalo sacrifice.
To Tay Nguyen people, gongs are priceless as a part of their being, one that speaks the universal language connecting this world and the other, expressing human thoughts, emotions and feeling in everyday life activities.
On festive days, the resounding beats of gongs make people stand up, form circles and dance around the community fire, which also seems to dance to the rhythm. In that dance, the material and spiritual worlds, humans and nature, past and the present all merge into a single, lasting moment.
Accompanying humans amidst the majestic landscape of Tay Nguyen for thousands of generations, gong art has reached high level of sophistication. Different arrangements and rhythms are adapted to the context of the ceremony being conducted. Here are some of the most typical gong ensembles:
Small 2-3 piece ensembles are considered the oldest combination. Brau people use two nippleless gongs, which they call Tha, where as the Churu, Bana, Giarai and Gie-Trieng.people use a set of three-nippled gongs.
Six piece ensembles, mostly consisting of nippleless gongs, are popular among many groups such as Ma or the Gar, Noong and Prong tribes of Mnong people. Xedang people call it Stang, while Kpa tribe of Ede people call it Diek. 12-13 piece ensembles usually consist of three nippled gongs and 8-9 nippleless ones. These are used by Giarai tribe of Arap, Bana tribes of Tolo and Kon K’deh, and Xedang tribe of Steng.
Ensembles with three or more gongs are often accompanied by a big drum and cymbals. Churu people even add a six-tune blow pipe.
Tay Nguyen gong ensembles are organized as orchestras which can perform multitune music pieces in diferent tune arrangements.
Each Tay Nguyen tribe, even each village, has its own tunes and performance styles when it comes to gong music.