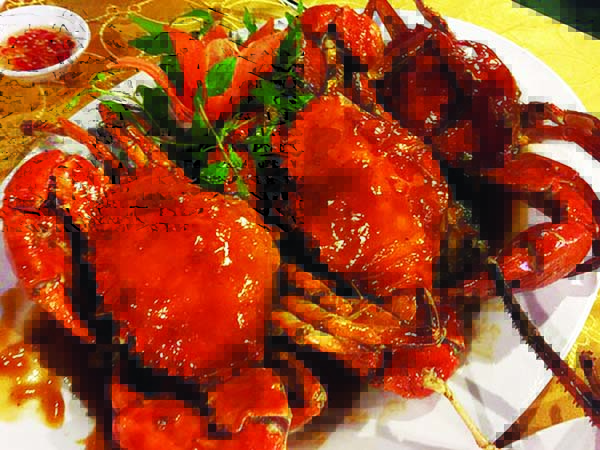 A short while ago, I was asked if the Vietnamese fondness for eating snails were a consequence of the former French presence here. Well I can tell you there is firm archaeological evidence that people in Vietnam have been chowing down on molluscs since neolithic times. In Europe , written records tell us that there was such high demand for the delicacy during the Roman Empire that they were even farmed.
The big difference in gastronomy here is that Europeans eat land snails, whereas in this watery land the snails are dug out of rivers, ponds, lakes and muddy shorelines and estuaries. As much as the English do the Vietnamese,including my wife,turn their noses up at the thought of eating ‘Oc Sen’- land snail. A notable exception here is from my son in law’s home town of Tay Ninh where the locals love their mountain snails.
Between Europe and Vietnam there is also a sociological difference in the eating of snail. In France they are associated with high end dining and they are often served with their rear ends stuffed with garlic butter. In contrast, the best place to eat snails in Vietnam can be in a quite down to earth ‘Quan Oc’ Here you will find a wide selection of the more common varieties and mainly men quaffing down beer as they eat. I had originally intended to write this article about a visit to one such place which gets five star reviews on the ‘Trip Advisor’ website. However on reconnoitre I discovered it is a small shop-like affair on a narrow busy street with more then the usual Saigon noise and pollution-unsuitable for a family night out.
So oft we went to try out a seafood restaurant located on a street where I work; namely the Ran Bien 7 (Sea Shrimp 7), which has snails high on the bill of fare. As the number would imply, this one of a chain with branches dotted around town. Our party consisted of myself, my wife, our two daughters with the elder one husband and our two grand daughters.
The restaurant is housed in a voluminous hall open to the street at one end. There is a grill station fired by charcoal timber and a white board with the price of the dishes posted. But the main attraction was the highly oxygenated aquaria centrally placed where we adults could introduce ourselves to our dinner and where the children could gaze in wonderment at such exotica as menacing Canadian King Crab,very ugly looking stone fish or , as they name them in Vietnamese, ca mat quy (evil eye fish) gigantic lobster and prawn and outsized grouper fish.
From the half a dozen or so snail dishes on the menu we ordered the Oc Huong (babylonia areolata), or in English, Perfume Snail so named from its fragrance both when fresh and cooked. It had the crunchiness and taste of sweet whelks. We also tried the Oc Mong Tay (Fingernail Snails) which were much larger and elongated. Not really a snail but a clam was the plate of So Duong Artex. All were served steamed and presented in their shells with garnishings of onion greens and peanuts-all very scrumptious and fresh.
Other dishes ordered by the party were blue swimmer crab,seafood rice mainly for the children ,and a seafood hotpot with rice noodles. Washed down with copious amounts of Saigon Export beer this was all a rare treat. I will add there are some very expensive imported items on offer such as lobsters at several million dongs a piece and both from Canada king crab and geoduck. The latter is very long and phallic looking Pacific Ocean clam-the translation of this name which is from a native Canadian language says as much.
Overall, we all had a very enjoyable evening. My Vietnamese wife gave the Ran Bien ten out of ten for everything but price. She was a bit shocked the bill came in at 2,800,000 VND. But for five adults and two kiddies if you are from London, Paris or New York you probably would not bat an eyelid. Finally those of you have still have a prejudice about eating snails, is it not about time you came out of your shells and tasted their delights? Neither you nor your stomach will be disappointed.

Season’s Greetings
& Merry Christmas 2018
What could be more wonderful this Christmas than to behold Saigon from the deck of the 5-star cruiser Saigon Princess, share stories with your loved ones, and enjoy a dinner prepared by our top chefs, in the classic beauty and elegance of the French Colonial style?
How about saving 30% on it?
This two-hour cruise includes a luxurious four-course Christmas menu, a glass of Rosé wine, and live music on the 360-degree Sundeck with romantic night time views of the city. You just need to choose us; we’ll do the rest.
This promotion runs 22 – 25 December, 2018 and applies to reservations with payment made prior to 20 December, 2018. Promotion rate: 910,000VND for adults , 455,000VND for children. 10% VAT & 5% Service Charge included.

Reach Your High at Fireworks Night
& Happy New Year 2019
As 2018 comes to a close, whether you were busy or leisurely, whether you were successful or still have many regrets, we all have the right to be proud of our efforts in the past year.
Give yourself and your beloved ones a memorable New Year’s Eve. Watching fireworks on the Sundeck of the Saigon Princess, with its 360-degree open space, and the most modern urban scenes on the Saigon River– this is the perfect ending to a a perfect year for you.
The four-hour cruise on the Saigon River will include live music, a welcome mocktail, a unique canapé menu, a special five-course dinner menu exclusive to the Saigon Princess, and a glass of sparkling wine at midnight. This perfect night will cap off with a fireworks display and a special gift.
This promotion applies ONLY to NEW YEAR’S EVE 31 December 2018, Reservations and payment prior to 25 December 2018 is requested. Promotion rate: 1,900,000VND for adults, 950,000VND for children. 5% Service Charge & 10% VAT included.