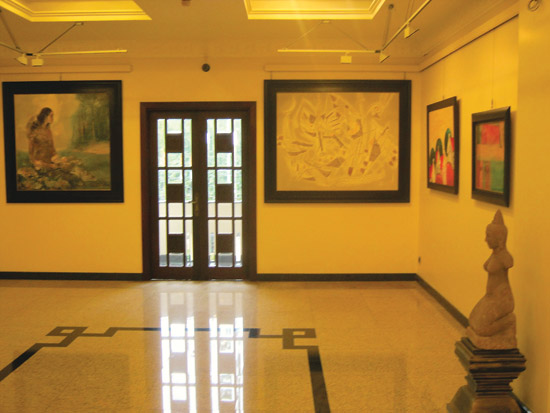 A private museum is a rarity anywhere in the world and quite a surprise to find in a country such as Vietnam. This museum’s subject is Art. It is located in the central business area of Ho Chi Minh City and housed in a beautiful villa with a befitting neo-classical porch that ushers you inside. It is slightly away from the main shopping streets, where the visitor can not fail to notice shops selling kitschy reproductions of famous paintings, and, being different entirely from this, it offers insight into the art that Vietnamese have produced in the last century. While there is plenty to muse about, the pedantic might say that it does not exactly meet the criteria for a museum, consisting as it does of two floors of commercial art gallery and one floor of exhibits from a collection built up over many years by an individual; the eponymous Mr Duc Minh.

A corner of the pictures for sale gallery.
Photo: Pip de Rouvray.

Whether you are a collector or just have a general interest in Vietnamese art, it is well worth a visit and has the added bonus of free admission. There was no catalogue, but this was more than compensated for by the services of the thoroughly knowledgeable manageress and guide, Miss Quynh. You are allowed to take pictures of the galleries but not close-ups of individual paintings. It is located on Le Quy Don street, which is famous for its numerous and varied high-end restaurants, so you may wish to plan your visit around lunch time.
I was supplied with a somewhat poorly translated article on the Duc Minh collection by art critic Thai Ba Van, which does help me to pass on to you some important details. Firstly, his dates show that he lived in troubled and turbulent times-1920-83. Miss Quynh informed me that he made his fortune through a number of jewellery shops in Hanoi. He made friendships with artists and used to regularly invite them to dinner. It is difficult for artists to earn their rice at any time, but during those years of hardship and isolation from the outside world it must have been particularly so. I conjectured that the dinners would have made up at least part of the payment. In any case, Miss Quynh informed me that Duc Minh managed to collect around one thousand paintings by twentieth-century Vietnamese artists. Thai Ba Van pays tribute to his discerning taste and his ‘great services to our national art’ which makes the collection as a whole a great resource as much for the art historian as well as the casual browser interested in national heritage. One of his sons now takes care of the collection and has brought them to safe haven in Ho Chi Minh City.
Only a very small number of these paintings-around fifteen-are on display in the basement of the villa. Unusual for a room of this function and perhaps reminding one that this is a private museum, I noticed a bar in the corner stocked with expensive cognacs. I imagined high-end customers being entertained there. You may not quite see what I saw, as they change the exhibits from time to time. However, I can report just how struck I was by the French/European influence on most of them, despite the scenes and themes being largely Vietnamese. Impressionism seemed to be behind most of the paintings in the small sample I witnessed. In contrast, when you move on to the contemporary works on the other two floors, you can see just how much Vietnamese art has opened up to a wider international range of influences in recent years.
What is on offer for those coming here looking for something to take home? Well, there is first and foremost diversity. Duc Minh is ready to take on anything of quality that is freshly off the easel. I saw landscapes, portraits, still life, pure abstract and semi-abstract works that might have taken inspiration from Picasso. Artists with established reputations as well as those still trying to break through have their works on display here. Pictures sell from three hundred and fifty US dollars to six or seven thousand.
Of course by the time you get there they may have flown off the shelf (or should that be wall?) but I was impressed by two artists in particular. One is a colourist and I have seen his or her works before in one of the aforementioned popular downtown gallery shops. Here were pictures painted exclusively in tinges of yellow with saffron-robed Buddhist monks in street scenes. There almost seems to a production line that makes them all look almost the same. Yet, they are beautiful. I am not against an artist churning out the same thing over and over again if it sells well. It is hard to learn a living with brush and canvass, and if I had such talent I would be tempted to follow this path. Novelists and film makers also sacrifice originality for profit. (Will there ever be an end to James Bond films or customers for ‘Rocky 9’ or ‘Shrek 7’?) However, if I were to buy a work of art, I would not like the thought that fifty other Tom Dick and Harrys had almost exactly the same thing on their walls.

The second artist had me standing in my tracks, so much so that I had to ask for his name. He is Tran Long. He had two paintings in realistic style with great attention to detail following the manner of Great Masters such as Rembrandt. One is of a young girl in traditional Northern Vietnamese robes carrying a tray of green mangoes set against a pitch-black background and with objects on a table, including a perfectly painted blue and white faience teapot. The black background, which may well be his hallmark, appears again in his second picture, here but otherwise it is a still life featuring handicrafts such as a rope basket and a wickerwork stool. Both for me are stunning works of art.
Whether you are like me, someone with a general interest in art or a serious collector, Duc Minh is a good place to head for. Here you can compare and contrast the top end of Vietnamese painting of the last century and the one that is currently underway and get some idea of the way things might be heading. Whether you wish to pay and become the ‘owner’ (or as I believe is only possible, the steward of a work of art) or whether you wish to ‘own’ art in your eyes and heart for a fleeting moment and perhaps longer in your memory, put Duc Minh on your itinerary. Remember the words of the poet, ‘A thing of beauty is a joy for ever’.