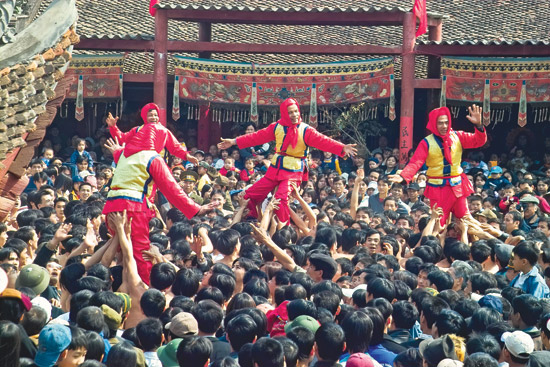 Tet 2013, I went to see a festival in Dong Ky village in Tu Son District, Bac Ninh Province, near Hanoi. It began with a firecracker procession. A train of hundreds of young men brought two gigantic cracker models and rolls of ‘small cracker model,’ each roll over 100 metres long, to the village communal house.
The chief cracker was about 6m long, and the lieutenant cracker about 5.8m long.
The two ends of the crackers were decorated with a star and an imitation of the ancient bronze drumhead.
Since the law forbids crackers, the villagers jumped and shouted instead.
The crackers used to be made of iron, but for a few years now, they have been made of wood, with sophisticated carvings of dragon and cranes, and painted in red and gold.
When the crackers are set in place, the village elders begin the prayer.
After the prayer, shirtless young men, adorned with red cloth belts rush in with shouts to carry the four festive mandarins to the court yard in front of the communal house.
The mandarins were middle-aged men, dressed in female clothes to add flavour to the fun. Everybody tried be the first to bring his mandarin to the court yard. This was the most boisterous part of the festival. The carriers had to hold the mandarins high, without falling. The mandarin who remained upright the longest was the winner. At the same time, everybody tried to touch a mandarin for good luck.
Dong Ky Festival is organized every year on the 4th day of the Lunar New Year (22 February, 2015 ).