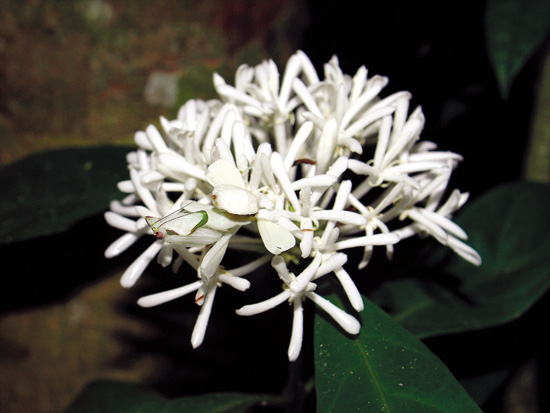 Pictures, clockwise from top left: The white mantis; the flying dragon; the walking-stick insect and the gliding gecko

Vietnam Heritage, September-October 2011 — The ability to change colour and appearance to blend with the environment is common. It helps some species avoid their enemies and
others to hunt.
A white mantis of the Mantidae looks like a white flower among fragrant flowers that lure insects to come for nectar and pollinate them. The predator doesn’t have to move, just wait.
Photo:  2010, Vinh Cuu  Protected Area, Dong Nai Province.
The spotted flying dragon, Draco maculatus, which can fly from tree to tree in hunting and finding a partner in the mating season, has talent in camouflage. This is a fairly common species in well-protected forests. It often chooses big, old plants to live in and hide in when threatened. In the mating season, the male has a gular flag on its neck to attract a partner. If it doesn’t have the flag, there is no guarantee the female can recognise it against bark. Photo: 2010, Mai fall, Tan Phu, Dong Nai Province.
One can barely tell that this is a larva of a night butterfly. Photo: 2010, in Bu Gia Map National Park, Binh Phuoc Province.
The walking-stick insect Diapheromera sp. is ancient, found in the Late Triassic, and it can be seen only when it moves to hunt or flees an enemy. Photo: 2010, Vinh Cuu Protected Area, Dong Nai Province.
At a distance of two metres, even with very sharp eyes, it is hard to distinguish the gliding gecko Ptychozoon trinotaterra from old bark. Thanks to its disguise, this gecko is called ‘killer of the rainforest’. It just waits for prey to turn up. This is a very rare species and difficult to photograph in the wild. Photo: early 2011,  Na Nung  Protected Area, Dac Nong Province, Central Highlands.

Text and Photographs by Phung My Trung