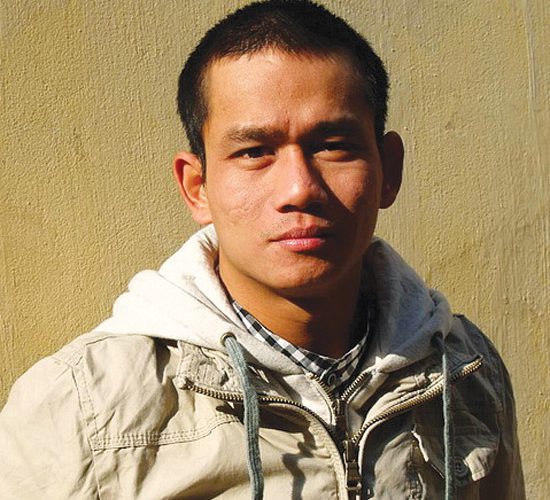 ‘Easy listening’ for the eye at Sofitel

The Sofitel Saigon Plaza is more than just a place to put your head down on a luxury pillow and savour gorgeous French, Vietnamese and International cuisine. If you do not want to miss something great, I suggest you pick up their monthly newsletter available at reception. This is a hotel that engages with the public at large, arranging events to showcase aspects of French culture, but also promoting local culture and heritage.
As can be expected with a hotel that is part of the Accor Group, which is perhaps the world’s greatest hotel and hospitality brand, it only associates with the best. In cooperation with one of Saigon’s most professional art galleries, Craig Thomas, from 22 October until the end of November, one can enjoy for free an exhibition of eleven vibrantly-coloured and joy-evoking mixed media pictures by the Hanoi artist Nguyen The Hung, simply entitled ‘Little Flowers’.
Situated in a corner of the vast lobby, the paintings first strike one with the brightness of their colours. They are mainly hues of bright blue and red. Secondly, on closer inspection, one notices that flowers and seeds predominate in all the pictures. Thirdly, there is a presence of people together. In a self-portrait, the figure is realistic. In the others, there are detached heads and fairly abstract human forms wrapped in long clothing. Without straining the brain at all, I concluded these frames were a celebration of fertility and life both in nature and the human race. The overall emotions they evoked for me were tranquillity and joyfulness.
The Hanoi-based artist was not present at the preview I attended, all the more incentive to canvass the opinions of other pundits. We all agreed there seemed to be great influence from modern Western art. Only the flowers with their whorls and often lotus appearance and slanted eyes on faces gave way the game that the artist is Oriental. For me, these paintings emanating happiness and the detached heads recalled the work of Marc Chagall. The chairman of a well-known international accountancy firm saw hints of Gustav Klimt. Figures in flowing robes and the use of gold leaf for parts of clothing would substantiate this view. Later, the chairman’s wife appeared. I asked her if she liked the paintings. ‘I don’t want to like them,’ she said. ‘If I like them, I will buy them’. At this, the chairman noticeably jolted, obviously calculating the damage this might do to personal finances. The most perspicacious comment came from another habitue of these ‘vernissages’, Leon who despite the name, is a quintessential English gentleman. ‘Painstaking; it must have taken the artist ages to do this-not just slap-dollop-slap’!
On the technical side, there is variety. All but two of the works are mounted on canvass; the exceptions are on dó paper. Hung uses acrylic paint, water colours and guoache. The latter is a technique whereby water colours are thickened, usually using gum arabic. If you were looking for the secret to his vibrancy, there you have it.
There is variety also in the selection on display. We have ‘Little Flowers’, numbers nine to eighteen of a series. Whilst they may all follow the same theme, they are individualistic and stand as independent works. A little more complicated is ‘Space for Showered Flowers’, a night scene depicting flowers showering down on the twisted figures of an embracing couple. The two on rice paper I mentioned are ‘Free Days 1 and 2’, which show a female figure in different shades of red. The first looks like an elongated queen from a pack of playing cards. The second was the only one I did like, as the highly distorted face is unpleasing. Then, there is strikingly realistic self-portrait, with the artist apparently in army fatigues still with flowers in the background. Finally, as in all Sofitel art exhibitions, the space behind the concierge desk at the beginning is given over to a larger picture. Here you can see ‘The Fair Lady’, a portrait of young couple in a blue field strewn with yellow flowers.
We all live in a world run at the pace of an F1 race car, and if we follow the news, a very violent one too. Mr Hung’s art reminds us there is forever love to console us and that there is a benevolent side to human nature. Also, there is the vivacity of nature to soothe us. A picture of his on the wall of your dwelling or in your company boardroom would be a relaxing reminder of just what we should be living for. We all need easy listening music to keep us calm. Mr Hung’s unpretentious art does the same for us on canvass.
‘Little Flowers’ a solo exhibition by Nguyen The Hung is on at the Sofitel Saigon Plaza, 17 Le Duan Boulevard, District 1, Ho Chi Minh City, until 30 November, 2014.