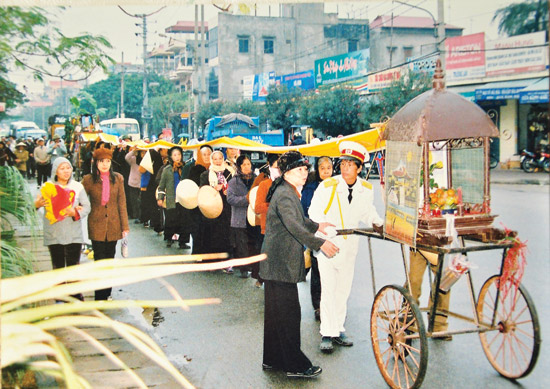 At about half past four on a Sunday morning, my cell phone rang unrelentingly, ‘she [i.e. my mother-in-law] is exhausted already. You, maternal uncle and wife, must come home immediately!’
I foresaw this, so I hastily called the driver, packed some clothes, and returned [from Hanoi to Hai Duong.]
We were in the midst of a record cold spell that had gripped the area for the last dozen years. The mist was thick, as if it would never evaporate — a dense, white vapour that descended from the sky to linger over the earth.
My mother-in-law had already died at 3.30 a.m. We were informed that she was ‘exhausted’ so that we wouldn’t be overwhelmed and get into an accident on the way. I eventually learned that my husband’s older sister had wanted to call us home since that afternoon, but my mother-in-law scolded her, ‘They’ll be home by tomorrow morning! Why do you have to call? It’s not like I’m already dead and you’ve got to rush!’ Poor my mother-in-law, even up until the time she died, she was still afraid to make her son worry and, since her illness allowed her to remain cognizant up until the moment of her death, she never suspected that she would pass away so quickly—only a few hours before we were able to arrive.

A funeral in Hai Duong.

Text and photo by Van Chi