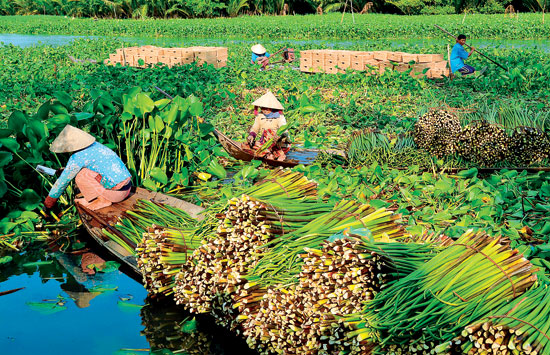 Collecting duckweed on a river
Photo: Do Huu Liem

Once thought to be
from the West, the humble duckweed
has created a
thriving trade

In 1905, a kind of South American duckweed appeared in Vietnam. Because of their habit of calling everything foreign ‘Western’, the Vietnamese started calling this floating plant ‘Western duckweed.’ In some southern localities, they call it the vase plant because its stalks swell out like a vase.
The duckweed is 30cm-60cm tall, with round green leaves which wrap around each other like a flower. In summer, it blossoms light violet flowers, with 3 long and 3 short upright pistils and hair-like fibrous black roots that can be up to 1m long.
The duckweed quickly multiplies and covers rivers, canals and ponds. In many places, farmers use it as food for pigs and to make muck.
The first person to have tried and found ways to make export products from this duckweed was Mr Trieu Vinh Thinh from Tet Mau Than St, Ward 4 of My Tho City, Tien Giang Province. Early in 2000, he sent abroad a few tiny items made of the plant, which attracted Western customers’ interest. Since then, the duckweed handicraft trade began to develop.
Today the duckweed handicraft trade has strengthened and spread to many villages in Vinh Long, Hau Giang, Dong Thap, Kien Giang provinces (in the South), Ninh Binh Province in the North and some provinces in Mid-Vietnam.
Diverse duckweed products such as newspaper stands, wine bottle hand baskets, paper trays, baskets, boxes, flowerpots and chairs have been exported to Denmark, Germany, Taiwan, Japan and China.
The material is three-month-old western duckweed plants, dried in the sun for three days.
According to the Vietnam Association of Trade Communities, the duckweed weaving techniques are quite simple, all based on wooden frames. There are basically only three weaving knots, namely ‘rice grain’, ‘fish bone’ and ‘spider web’ knots. The final product keeps the material’s original colours and is ornamented with grass, glass or plastic beads.
Thanks to the duckweed weaving trade, many poor farmers have extra work and income. So duckweed is considered ‘the poor’s plant’ or ‘rescuer from hunger.’
Vinh Hoa Hung Bac Village in Go Quao District, Kien Giang Province, is one of those duckweed trade villages that attracts many tourists. There, thousands earn their living just by working the duckweed.