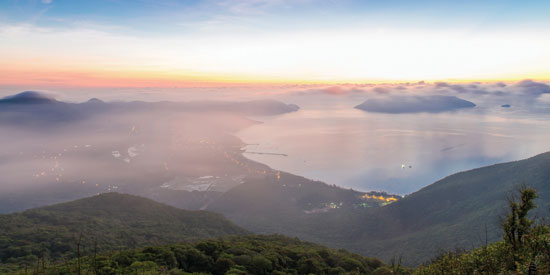 The drive from the tiny airport on Con Son, the archipelagoâ€™s main island, into town provides a preview of what to expect: hills covered in dense jungle in the interior, beautiful beaches and dramatic scenery along the coast. We rented a motorbike from Con Dao Camping, a great choice for those on a budget, and headed back towards the airport to get to Dam Trau Beach. The 20-minute drive along the coast is a stunner, with hills dropping into the sea and panoramic views of smaller, no less-rugged islands. Perhaps the most incredible part of the drive is what you donâ€™t see.There are no high-rise hotels or concrete â€˜tubeâ€™ buildings, no sea-side beer clubs or karaoke joints, no garish Vinpearl resorts; just jungle and ocean.

At Van Son Pagoda, located on a hill outside of the main town on Con Son. Photo: Michael Tatarski

Located down a sandy path that branches left off the main road just before the airport, Dam Trau is serviced by a couple of ramshackle restaurants and features crystal-clear water. The runway ends farther down the beach, and occasionally a turboprop plane rumbles overhead during takeoff. The remoteness of the beach means it is very quiet, although away from the cafes, a fair bit of garbage has washed ashore. The main area is kept very clean though, something which canâ€™t always be said for beaches in Vietnam.
The most well-known resort on Con Son is the Six Senses Con Dao, a very high-end property with a private beach and discreet entrance in between the airport and town. While staying there was out of the question for us, we did decide to have dinner at the By the Beach restaurant one night, which is well worth splashing out on. The design of the Six Senses uses natural elements, and the resort feels completely at home among the lush fauna and white sand of the area. Dining next to the beach with an empty bay stretching into the distance was a treat that canâ€™t be copied elsewhere in the country.
We were also able to enjoy the beach that sits smack in front of Con Dao Camping and runs away to the right of the main boat pier. On the end of the beach, a long, jungle-clad stretch of hills juts out into the ocean, separating the area from the western side of the island. This deep, stunning section of white sand was, amazingly, almost completely empty for the duration of our stay. A number of locals come out once the sun begins to go down, but during the day, we were able to soak up rays and cool off in the clear water on our own. This was among the most beautiful beaches Iâ€™ve seen in Vietnam, and there was no one there. This highlighted the off-the-beaten-path nature of Con Dao.

The next day, we drove over to the west side of the island, and while the beaches in the east had been quite calm, strong winds buffeted this stretch of coast, throwing impressive waves onto the rocky coast. The scenery was, if possible, even more stunning than elsewhere on Con Son, with sweeping views of the aquamarine sea and striking Hon Ba island. The road passes through a scruffy fishing village before tapering off amidst verdant jungle. We stopped and watched fishing boats come and go before returning to town, slightly sun- and wind-burned from the drive.
Another highlight of Con Son is the Van Son Pagoda, a five-minute drive west on the coast road from town. Visitors have to climb up a steep set of stairs, which are fortunately shaded from the blistering tropical sun, to reach the complex. You are rewarded with views back towards town and the expanse of white sand that fronts it, as well as the incredibly blue sea. They say if youâ€™ve seen one pagoda youâ€™ve seen them all, but I found the architecture and design here particularly impressive, even though Iâ€™ve seen countless pagodas throughout Vietnam. Van Son may not fall under the category of natural beauty, but it is well worth a visit.
Con Son is also home to a lot history, particularly from the French colonial period, reminders of which dot the island in the form of run-down mustard yellow buildings and crumbling brick structures that served nefarious purposes when the island served as a penal colony. In recent years,Vietnam has obliterated much of its architectural past, so it was good to see that some remains here, even if the buildings offer grim reminders of years gone by. One wonders how well this history will be preserved if Con Dao is further developed in the future.
After five days of enjoying the sun and the sea, it was time to return to manic Ho Chi Minh City, a rough adjustment after enjoying the nearly empty roads of Con Son, where rush hour is an unheard-of concept. The island had quickly become one of the best places Iâ€™ve traveled to in Vietnam, and I canâ€™t believe just how quiet it is. It is true that airfare to the island is on the pricier side and accommodation isnâ€™t as cheap as in more popular spots like Mui Ne, but the quiet, hassle-free beauty more than makes up for the extra expense. At the same time, I hope Con Dao remains off the agenda for most visitors, as I have seen how widespread attention and cheap access has changed Phu Quoc for the worse. Iâ€™m not sure what the future holds for the archipelago, but for now, it offers an unbeatable combination of incredible beauty and empty space.n