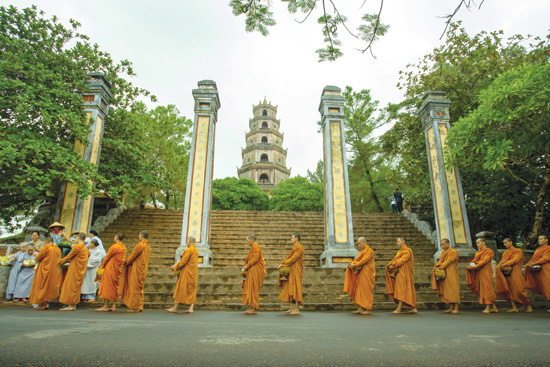 As Buddhism is reaching out to counties outside Asia, people around the world pay more attention to Buddhism these days. Vietnamese native Buddhist monks are among the ones spreading the religion to the world.
Hue is always at the top of the list of destinations for Buddhist pilgrimage since the locality is considered as the cradle of Vietnamese Buddhism.
Hue is home to almost 300 pagodas and Buddhist temples and most of them are unique structures that provide an ambiance of peace. Once visitors step inside the atmosphere brings them peace of mind and makes them feel free from life’s activity, dust and noise.
The harmony of buildings and nature at these pagodas, the holy quietness and the gentleness of monks are among the factors creating peace amid the urban frenzy outside. The secluded and peaceful pagodas are a pleasant place to visit even for non-believers.
One of the city’s most magnificent pagodas is Thien Mu pagoda, which is located on a hill and overlooks a very scenic part of the Huong (Perfume) River and receives hundreds of visits everyday.
It was built in 1601 on a total area of four hectares, and has many trees. Visitors step on stairs to enter its front yard, and then enter a three-door gate to go inside. Silent paths lead them to the pagoda’s main building, which is amidst a green field of grass and bonsai trees that takes them further into the world of quietness.

Home to hundreds of pagodas, Hue is said to be the land of Buddhism.
Locals all follow Buddhist philosophy and this makes them calm and gentle.

The pagoda has its own legend, which says that Lord Nguyen Hoang, the first of nine Nguyen Lords (1558-1777) who later formed the Nguyen Dynasty (1802-1945), was travelling from the north of Vietnam to seek land for settling down in Hue.
He dreamed a lady from heaven, who told him to choose Hue for his kingdom’s capital. Thankful, the lord decided to build a pagoda on the peak of the hill where the lady had landed and named it Thien Mu (Heaven Lady) Pagoda. The lord was amazed by the beauty of the hill that was partly surrounded by a poetic river when he surveyed it for building the pagoda.
But the most iconic building of the pagoda is a seven-story brick tower that was built in 1864 by the dynasty’s fourth emperor, Thieu Tri. The tower is at 21 metres high, and each floor has a Buddha statue and a door looking to the river. In the tower, a spiral staircase leads from the first floor to its top. However, tourists are not allowed to go inside.
The pagoda receives hundreds of visitors every day, including many foreigners. It is also a favourite site to locals, who want to have some peace in the early morning or at the twilight, viewing nature and listening to sounds of an ancient bronze bell.
Almost six decades ago, Theravada (or Early) Buddhism pagodas made a comeback to the locality. It gave locals a new breath of Buddhism, as according to some, the touch of “normal” life has intruded too deeply into the practice of Mahayana pagodas and many seem to smell of money and power, forcing seekers to turn to Theravada pagodas to feel the pureness of early Buddhism.
The first Theravada pagoda, Tang Quang Pagoda, was built in Hue in 1957. Later it got five more, including Thuyen Lam, Dinh Quang, Phap Luan, Huyen Khong, and Huyen Khong Son Thuong.

A parade of followers in a visit to Theravada Huyen Khong Pagoda.

Huyen Khong Son Thuong is a Zen facility lying on a mountain side and it is worth visiting. Huyen Khong Son Thuong does not have grand buildings as local Mahayana pagodas have. Everything at the pagoda looks simple as the Theravada practice is.
A Zen garden has been set up in the middle of the 50 hectares of forest land. The garden looks ever green with grass, plants, trees, and stones, which have been organized to highlight the theme of nature respect and harmony.
It also has five ponds and pavilions displaying Zen poems and calligraphy work by the pagoda’s head monk Minh Duc Trieu Tam Anh. Inside the pagoda, visitors have the feeling of being taken back to nature to feel and respect it, which produces peace from inside each person.
A day in the pagoda is just like coming closer to Buddha and his philosophy for a better mind and easing the burden of life that is on our shoulders.