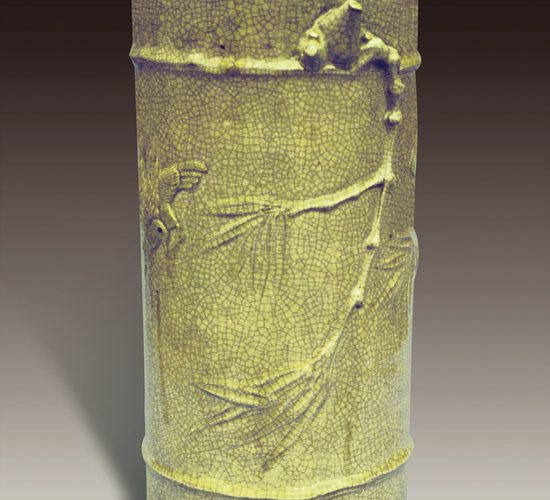 Ceramics a touchstone of Vietnamese culture for twenty centuries

For certain reasons, under the Nguyen Dynasty, Vietnam’s foreign trade was restricted while its agriculture was highlighted. As a consequence, the decline of Vietnamese ceramics, which had started from the late Le period, continued. However, to provide ceramics to the new capital in Hue, the Nguyen Dynasty opened several new kilns there. At the same time, other kiln centres, namely Mong Cai (Quang Ninh), Tho Ha (Bac Giang), Phu Lang (Bac Ninh), Bat Trang (Hanoi), Huong Canh ( Vinh Phu), Que Quyen (Ha Nam), Ham Rong ( Thanh Hoa), Cay Mai (Saigon), Lai Thieu (Binh Duong), Bien Hoa (Dong Nai) still produced their traditional items for domestic consumption.
At that time, Bat Trang was still the most active kiln centre in the Nguyen period, producing ceramics in the most diversified type, form and decoration. Today, many Bat Trang examples dating to Gia Long’s reign (1802-1819) are preserved in the Museum of Vietnamese Fine Arts and the National Museum of Vietnamese History.
Of these, most interesting are two lime pots in crackle ivory glaze. The first has a handle incised in relief with a bat holding a written scroll in its mouth and four rising snake heads. The second has a handle modelled with a stylized areca flower and four snake-like animals. It should be mentioned that a bat holding a written scroll in its mouth is a Chinese emblem for happiness related to scholarly success. Meanwhile, the snake is a Vietnamese symbol of the male related to ‘Mr Lime Pot’ as called by the Vietnamese. The stylized areca flower on the handle of the lime pot also symbolizes the association between areca, betel and lime in the custom of betel chewing; the betel quid is also a symbol of happiness.
Also very interesting is a crackle ivory-covered jar with a peach-shaped knob, four applied elephants’ heads on the shoulder, a blue under-glaze featuring Chinese Fu Hsi’s Eight Triagrams and yin-yang themes on the body.
These examples are interesting because they are among the few Bat Trang items on which Vietnamese and Chinese motifs are integrated.

The history of Vietnamese ceramics can be traced back 10,000 years, to the Neolithic Hoa Binh culture. However, the most solid evidence has been found at Da But and Quynh Van sites dating to 5,000 BC. Ceramic shards with sophisticated geometric patterns have been discovered from various sites of Phung Nguyen culture (1,800 BC). It is very meaningful that many of Phung Nguyen motifs were represented on the earliest and most elaborately decorated Dong Son bronze drums (500 BC – 40 AD), showing a Vietnamese continuous artistic tradition as well as an active contribution of potters to the bronze-casting technology.
In the first millennium BC, many Vietnamese bronze drums were destroyed or buried. Nevertheless, Vietnamese ceramics developed in Chinese shapes but with Dong Son motifs.
Under the Ly and Tran dynasties, when Vietnam’s independence was consolidated, separate traditions emerged. Ly-Tran brown patterned ceramics were produced with original Vietnamese decorative technique, shapes and designs. Many motifs once incised on Dong Son bronze drums were represented in combination with elements borrowed and modified from neighbouring cultures.
From the 14th to 17th century, Vietnamese ceramics participated in the international maritime trade. Numerous Vietnamese blue and white wares, including masterpieces like the famous Topkari vase were exported to many countries in South East Asia and Middle East. Especially, under the Le Thanh Tong’s reign (1460-1497), both the country and its ceramic production had a Golden Age. It is not coincidental that in the last years of the 16th century, Dang Huyen Thong, a potter from the Nam Sach blue and white ceramics centre fabricated several incense burners in the form of Dong Son bronze drums and with Dong Son geometric motifs.
Thus, 2000 years of Vietnamese ceramics have reflected 4000 years of Vietnamese history and culture. These ceramics are not only a proud cultural heritage, but also a solid foundation for the development of Vietnamese ceramic production in a more and more integrated world.