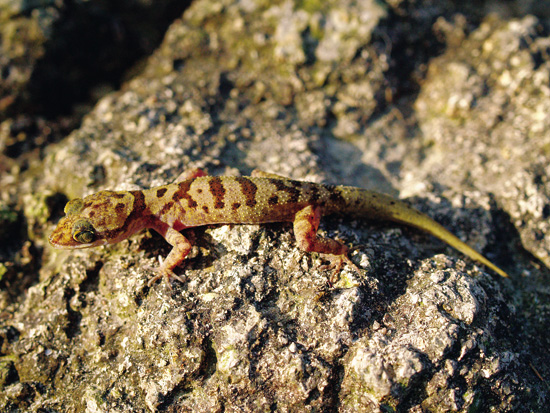 Besides the boar, on Dinh Mount

Vietnam Heritage, September-October 2011 — Dinh Mount is about 90 km east of Saigon, close to Highway 51, which connects Saigon and Vung Tau, the beach city. In Tan Hoa Commune, Tan Thanh District, Ba Ria-Vung Tau Province, Dinh Mount is an imposing range lying next to the coast, forming an arc in the northwest-southeast direction with an area of about 60 km². The highest peak is Ong Trinh, 504 m. On Dinh Mount is a complex of shrines, temples and pagodas, placed along streams.
After an exhausting night researching the bent-toed gecko Cyrtodactylus cattiennensis, a species discovered in southern Vietnam by Vietnamese and German scientists in 2009 and recently on Dinh Mount, I just wanted to lie down and sleep. But An, a forest worker, said orchids were blooming beautifully on the other side of the mountain. The sun was up. I hastily packed up the luggage, with camera, rope and specimen-containers, and got moving. The life of a freelance researcher is like that: I need to put my weekend time to full use. To me, searching for a new species for scientific purposes is probably like opium and cannot be given up, though many times I have faced deadly situations.
Dinh Mount is beautiful in the early morning. The nocturnal reptiles were still sleeping after a risky night hunting for food.
The noisy, red-whiskered bulbuls, Pycnonotus jocosus, were gurgling to each other about the succulent fruit on trees of the soapberry family. Our presence brought shouts from the white-crested laughing thrushes, Garrulax leucolophus.
The flowers of pink shower trees, Cassia javanica, were blooming against green leaves. These plants, with gentle and fragrant flowers, are very attractive to insects, which come for the nectar and pollinate them.
An signaled to me to be quiet, as if he had discovered something. I quickly turned the camera toward the direction An was pointing and shot continuously. A wild boar enjoying his breakfast flashed away into the forest when he noticed us. Here the forests were devastated, most herbivora and carnivore, such as deer and muntjac, gone. What remained were several individual monkeys, wild boar, weasels and mouse deer. They become shy and careful. They flee humans immediately. However, the remaining reptiles and amphibians in this area are worth studying, because on isolated mountains like Dinh Mount it is possible to discover new or endemic species.
On a small branch, a couple of sooty-headed bulbuls, Pycnonotus chanter, were passionately looking at their love result. Only a few weeks later, their eggs would hatch.
On the top of the mountain, the landscape of the cities, villages and the sea appeared in front and made our tiredness disappear. The 52x binoculars were passed round.
On a slippery cliff, the first patches of beautiful doritis orchid, Doritis pulcherrima, appeared as a bright flower carpet. However, I dared not record this with my camera, for I feared that the orchid population would be destroyed if its location were made public. Images of wild orchids on sale in Ho Chi Minh City streets popped up.
A bunch of a mutant orchid with purple lip and beautiful white petals was swaying in a gentle wind. Certainly this image would be the desire of many orchid-fanciers.

On a wet rock cliff was a bunch of tiny green plants. I was startled to find they were Elwes’s Bulbophyllum orchid, Porpax elwesii. The tiny plant has very small tubers, around 1 cm in diameter and 0.2 cm thick. It sticks tightly in crevices. Not many orchid taxonomists have a chance to admire their flowers. The plant has only two leaves, 1-1.2cm in length, which fall easily, to avoid water-loss. This would help them overcome the harsh dry season in this area, when the tubers hide in rock cracks and are hard to recognise with the naked eye. After many years of waiting, for the first time I was able to photograph the flower of this orchid in the wild.
While I was engrossed with the first orchids of the season blooming on the rocks, my colleague passed me a strange, red skink. I carefully observed it as the most beautiful gift of a working day and then wondered if it was a new species. In fact, it turns out that the known existence of the skink on Dinh Mount is new. A new distribution of the skink, Sphenomorphus buonloicus, on Dinh Mount has recently been announced. The species was discovered by Russian and Vietnamese scientists in 2003, but at that time found only in Buon Luoi, Kon Tum Province.
The sun rose high and we prepared to go down the mountain after a morning harvesting many specimens and pictures. I lay on the ground and watched a blue sky with no trace of cloud. I felt a tickle on my back. I stood up and, as years of research experience guided, with my two hands gently scooped up the dry leaves I had been lying on into the specimen box. I watched a couple of mountain shrews, Suncus sp., having a deep sleep inside a dry leaf rolled like a trumpet. [A shrew is ‘a small mouse-like insectivorous mammal with a long pointed snout and tiny eyes’, according to the Concise Oxford Dictionary, 2006]. It was first time in my life that I’d ever seen such a small adult shrew as this species, only a centimetre across. Then I thought of an expert studying this species in Vietnam and later sent him the specimens. Recently, after comparing DNA samples and the skull of this shrew species at an international museum, he informed me that this was a new species and would be published in Vietnam in 2011.
Goodbye, Dinh Mount, a place I have been familiar with, down to single tree and clump of grass. In this bare forest, severely damaged, there remain two new species and at least two other species with new distribution records. In the desolation of a mountain that used to be full of trees and animals, there are still many things to be discovered for science and human existence.