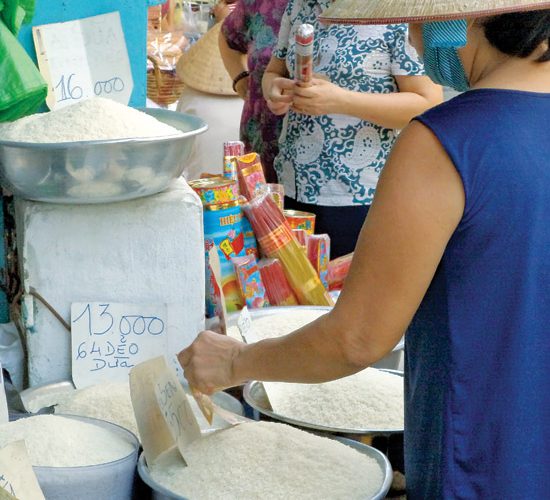 At the foot of The Manor

NgÃ² gai, ngÃ² gai.â€™ Sounds incomprehensible to my ears floated around me, but that they were directed at me never entered my consciousness. â€˜NgÃ² gai! ngÃ² gai!â€™ The words became louder, and finally a wizened old woman grabbed a bushel of cilantro (coriander) with her knobby fingers and shoved it abruptly under my nose while repeating â€˜ngÃ² gaiâ€™ once again. Her unexpected gesture caught me woefully off guard, and I initially jumped as the intoxicating aroma first filled my nostrils and then my imagination. More than a few housewives chuckled and pointed my way as embarrassment flushed my cheeks a shade of crimson probably only matched by the overripe tomatoes piled around my feet.
One by one these seasoned veterans of street market shopping held up various herbs for me to sniff, and soon enough my shyness melted away as our laughter merged into one sidewalk chorus under the blazing sun. For the first time I truly felt a part of my neighbourhood as they repeated the Vietnamese names for these bushels of greens while encouraging me to parrot their tongue-twisting words. Welcome to a side of Saigon well off the beaten path for most visitors and expats, yet so close for those who dare shake off their inhibitions and immerse full-on into the chaotic maelstrom.
HCMCâ€™s Binh Thanh District sprawls in its low-rise concrete glory just beyond the confines of high-rise apartment compounds such as The Manor and Saigon Pearl. The transition from these westernized cocoons into the fabric of Binh Thanhâ€™s streets and markets is rather abrupt. The short journey down a narrow alley just beside The Manor is much like a portal transporting me to what I affectionately call â€˜Old Asiaâ€™ as I leave behind my familiar world of American fast food outlets, rooftop swimming pools, and modern supermarkets. Sadly I feel most of my neighbours remain firmly ensconced within our modern confines as their only journey through Binh Thanh seems to be a taxicab ride from the lobby door to points onward.