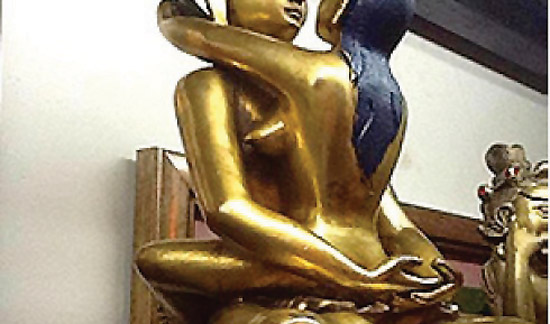 Tantric Buddha draws ire
Tuoitrenews.com, 7 March
An inspection will be done at all pagodas in Vietnam and any statues depicting the Buddha hugging nude women will be removed, according to Tuoi Tre of 7 March. This is in response to recent claims that there is such a statue in Vietnam, triggering anger among many who say it is blasphemous.

A photo showing one such statue was posted on Facebook and its poster claimed it was taken in Vietnam, but did not specify the location. Thailand’s Bangkok Post late February wrote that the figurine drew condemnation from the Thai Buddhist world.
In response, Thich Gia Quang, head of the Buddhist Church of Vietnam’s communication department, told Buddhist news site phatgiao.org.vn that his organization will soon request all Buddhist units across the country to check all pagodas and worshipping sites for such statues and, if found, will remove them.
The senior monk said there is no such figurines under the Vietnamese Buddhist tradition and that the public would protest if they appeared.
He added that even though such sculptures are common in India, Nepal or Tibet, they are definitely ‘not appropriate’ for Vietnam,taking into account its Buddhist history, tradition and culture.
Meanwhile, Doctor Nguyen Minh Ngoc, a Buddhist researcher at the Vietnamese Institute of Religions, said that the statue could be in Vietnam but it is likely to belong to someone’s personal collection and is not on display in public.
‘It is just a normal tantric statue. It is completely wrong to say that it depicts sex between Lord Buddha and a woman. Such ideas stem from the fact that we impose our own modern views, while its cultural root is different.’
Dr. Ngoc explained that it represents the union of yin and yang, of the male representing compassion with the female representing wisdom. The marriage of wisdom and compassion leads to enlightenment, he says. The researcher added that if the statue in the Facebook photo is indeed an ancient one and has Vietnamese origins, it is priceless and a breakthrough for archaeology, art and religion studies. ‘It fills the gap in the history of Tantric Buddhism or Vajrayana in Vietnam.’
According to Dr. Ngoc, it is not known when Vajrayana first arrived in Vietnam and exactly which Vajrayana sects existed in the country.
Evidence says that Vajrayana did survive during the Ly dynasty but no tantric statues of the period have ever been found.
Art scholar Pham Trung of the Institute of Arts told Thanh Nien he once saw similar statues on display at an exhibition inside the Vietnam Fine Arts Museum in Hanoi. ‘But the sculptures were very small and I think did not originate from Vietnam.’
They are considered artworks and not objects of worship, Trung added.

Ain’t that a kick in the head?
The government is trying to crack down on producers and users of fake helmets.
In 2007, a government regulation was issued to force motorbike riders to wear helmets and almost overnight, the streets became full of riders with helmets – a change that surprised many.
It’s estimated now about 90 per cent of motorbike riders wear helmets. However, the National Traffic Safety Committee is quoted as saying in Tien Phong of 8 March that 70 per cent of the helmets are fake or sub-standard.
Most people just wear helmets so that police don’t stop them, rather than for protection.
It’s estimated that about $34.5 million has been spent on helmets that bring no safety.

Maybe it was the songs they sung
Between 2005 and 2012, Ho Chi Minh City issued no new licenses to allow investors to provide karaoke service, according to Thanh Nien of 25 January. The service was discovered to be fertile ground for prostitution and the city has put a cap on the issuance of new licenses until the issue can be resolved. It’s expected new licenses will be issued again by the end of this year.

Luxury cars avoid tax
There are about 70 Rolls-Royce automobiles in Vietnam, according to Thanh Nien of 25 February.
Brands including Bugatti Veyron, Bentley Continental Flying Spur also appear on Vietnamese streets.
Since overseas Vietnamese returning to their homeland are allowed to bring along their cars without paying import tax, the regulation is being used by car traders to import expensive vehicles without paying tax.

Heavy Buddha
The statue of Maitreya Buddha on the Cam Mountain in An Giang Province and the statue featuring the Buddha entering Nirvana on Ta Cu Mountain in Binh Thuan province have been recognized as Asian records, according to english.vietnamnet.vn of 6 March.
Earlier on 27 February, the Vietnamese delegation attended the Asian record festival. The statue of Maitreya Buddha is 33.6 meters high from the base to the top and weighs nearly 1,700 tons. It is made of reinforced concrete.