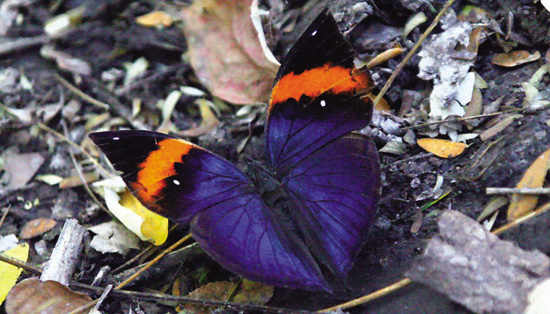 Vietnam Heritage, June-July 2011 — The leafwing butterfly Kallima inachus, one of the best-known butterfly species in Vietnam, has the ability to disguise itself as a leaf to hide from its enemies. It has two forewings and two hindwings. When at rest, it holds its wings vertically and looks like a dry leaf. The long tail of hindwing looks like a leaf-stem while a brown line extending to tip of the forewing looks like the vein of a leaf. If disturbed by a noise, these butterflies fly very high and fast and then wedge themselves into foliage.
In most females of Kallima inachus, the apex of the forewings is lengthened and protruding, while in male butterflies the upper surfaces of the wings are purple-blue or bluish, depending on the season. And during mating season, the colour of the under-surface of the wings of males is very showy, to attract partners.
The ‘flying leaf’ of the leafwing butterfly Kallima inachus is very effective for finding and hiding from enemies. At a distance of two metres, could you recognize it among thick, dry foliage? Or have you ever seen this strange butterfly species in the wild? Even butterfly researchers wouldn’t have many chances to admire these beautiful butterflies.
Kallima inachus only lives in evergreen forests with big plants. Individuals are found in the palm Calamus sp., of the Arecaceae family. Sometimes they are also attracted by the rotten fruit of fig trees. This species lives at elevations below 1,200m, in southern China, Thailand, Laos and Vietnam. In Vietnam, the species occurs mainly in June and July in such places as Cuc Phuong, Ba Vi and Tam Dao national parks.

Of the 1,000 species of orchids found in Vietnam, about 20 are species of Paphiopedilum, or lady’s slipper, and some of these grow only in Vietnam and only in limestone mountains above an altitude of 1,000 metres. All species of Paphiopedilum in Vietnam are in the Red Book and protected by the Convention on International Trade in Endangered Species of Wild Fauna and Flora. One of the best-known is the pink Paphiopedilum delenatiis. Its discovery involves a love story in which, in 1913, a French officer who found what was to him a beautiful, strange orchid in the highlands of northern Vietnam took it to France as a romantic gift.
The species was next discovered in 1922, in the Vietnamese province of Khanh Hoa by a French explorer named Poilane. It was sent to a gardener named Delenat of St Germaine en Laye castle, near St Cloud. When it bloomed, a French botanist, André Guillaumain, described it and announced it as a new species, named after Delenat. Paphiopedilum delenatii continued unrecorded in the wild in Vietnam while Vacherot & Lecoufle, horticulturists, grew it from seed and cornered the world market, receiving awards as well as wealth.
In 1992, a large number of pink lady’s slipper orchids were on sale in Hong Kong and exported to Japan, the United States, France and Germany. In 2010, ninety seven years after the flower was first discovered, Vietnamese biologists found P. delenatiis at 800 metres to 1,000 metres in altitude on Hon Ba Mountain, about 60 km from Nha Trang.
The orchid grows in small clumps in damp caves.
The leaves are 8 cm to 11 cm long and 3 cm to 4 cm wide, in two rows, their upper surfaces dark green and lower lighter green, and they are dotted with purple. The inflorescence is 20 cm long and has one or two flowers, and a green stem with red spots and sparse hairs. The two oval bracts are 1.2 cm to 1.5 cm long. The flower (pink) is about 8 cm across. The upper sepal is ovate, with a slightly rolled edge, 3 cm long and 4 cm wide, with an inner surface that is pale pink, and has short hairs; the outer surface is dotted with red. The lower sepal is similar to the upper but slightly larger. The petals are roundish, 3 cm to 4 cm long and 2.4 cm to 3.5 cm wide, pinkish inside, dotted brown-red on the outside, with sparse short hairs on both sides. The stigma is purple-red with large, bright-yellow spots on top and 1.5 cm long.
Orchid breeders in the US, Taiwan, Japan and Europe have crossed Paphiopedilum delenatii with many other lady’s slipper (Paphiopedilum). For $10 to $15 one can buy a beautiful orchid with large flowers and a mild aroma, with a character very like that of Paphiopedilum as it grows in the wild.n

Text and Photo By Phung My Trung