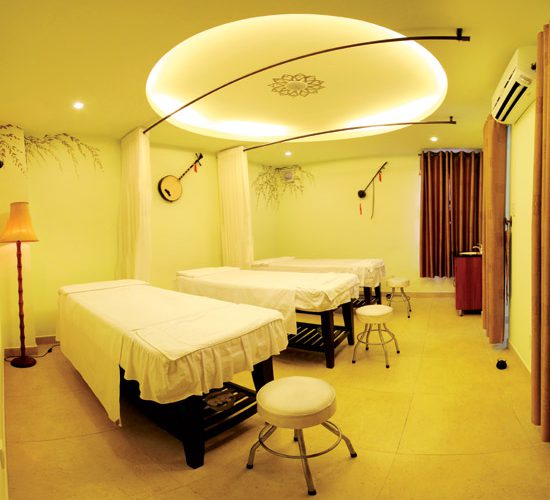 A VIP in cavier

The sentiments of the poet Henly are mine too â€“ â€˜the passing of the years finds and leaves me unafraidâ€™. I may be too young to worry. I am just fifty six. Yet I believe my skin looks younger than its years. My strategy so far has been simple. I exercise regularly, wash in soap and water and eat a daily ration of extra-virgin olive oil.
Cities in general will wear one down. Ho Chi Minh City in particular must be at the top of the league for this. With its noise, pollution and the motorbikes constantly at your backside even when you are innocently walking on the pavement this a tiring place indeed. Small wonder then that this is fertile territory for enterprises offering to ease your weary body with a massage. There are so many of them. In one downtown street, indeed, you are met every five metres by a girl thrusting a leaflet and shouting â€˜Massaâ€™ in your ear. You know what they mean. They are not inviting you to meet Filipe the famous Brazilian Formula One driver.
Up market places offering these services use the word â€˜spaâ€™ to describe themselves, which also has strong Formula One connotations. One of the largest of these and one offering a wide range of formulae for renewal and relaxation as well as normal hairdressing services is V Spa. It has been around for eight years although under its present management for only one, during which it has opened up a branch on touristy Le Thanh Ton Street. I went to its main branch housed in a rambling villa off relatively quiet Phung Khac Khoan Street also in District 1 of Ho Chi Minh City using a VIP card given to me by the Editor-in-Chief of Vietnam Heritage that allowed me to have some services for free.
Lying on your back on a couch for over an hour and staring through a circular hole at a bowl of water with lotus flowers it may not sound enthralling. But believe you me when you are unaware which part of your body will next come under attention for a pummeling, pounding or a stretching, you keep alert at every moment almost as much as I did in the bunker of our compound in Afghanistan when it came under rocket attack.
After around half an hour Miss Thy my masseuse rubbed in an anti-ageing cream all over my body. The secret of this, purportedly, is that it contains fresh caviar. However, there is no need to worry about contributing to the extinction of the Caspian sturgeon, as the â€˜caviarâ€™ in question is salmon roe. All the ointments and unctions used at V Spa are imported from France.
Next it was time for the application of hot stones. They were placed along my spine and were just at the right temperature â€“ hot but not too so. Miss Thy uses them to very soothing effect, rubbing them carefully over what seems to be all the right acupuncture points.
After well over an hour it was time to turn face up for the second treatment â€“ a facial. Patiently, my masseuseâ€™s delicate fingers got to work on every part of my face, beginning with the skull. She even spent a good ten minutes massaging my eyelids.
Suddenly things started to get scary as Miss Thy wheeled in a machine that looked like a miniature crane the like of which I last saw at the dentistâ€™s. Then she donned a surgeonâ€™s mask. What had I let myself in for? Was she going to start pulling teeth or was it her evil intent to trepan my skull? I started to wish I was back in the relative safety of the Kabul bunker.
The pistol-like rod of the appaartus was pointed at my forehead. There was a tense moment of suspense but nothing more sinister happened than the blowing of hot air over my face. Miss Thy then rubbed in the â€˜caviarâ€™ cream over my face and after a long while removed it with little swabs over her fingers.
As a grand finale to the three-hour act, my eyes were covered with a gauze face mask. A cream was applied over this, sweetly smelling of peaches and papaya. I lay blindfolded for a full half hour while my face and body were massaged again. Finally the mask was removed and out came the finger swabs again.
If you had been wondering about what goes on in these places, dear reader, there you have it. My body had been well toned up and spirits reinvigorated. Rejuvenated? Well I can tell you I left V Spa not feeling a day over fifty seven.n
V-Spa
16E Phung Khac Khoan St, Dist.1,
Ho Chi Minh City
Tel: (08) 3827-9484
15B/25 Le Thanh Ton St, Dist.1,
Ho Chi Minh City
Tel: (08) 6291-8179
www.vspa.vn