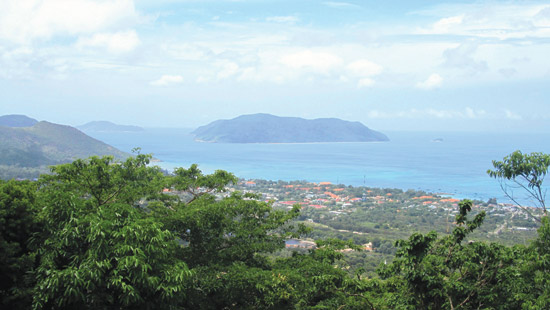 View from the pavilion at So Ray, formerly a plantation worked by Vietnamese political prisoners

So Ray is a fruit and vegetable plantation hacked out of the jungle on a plateau, rising 210 metres above sea level on Con Dao’s main island. It was cleared by prisoners of the French settlement to supply the tables of their captors. Looking half way up the mountains above the island’s little town of Cay Bang you can spot a blue pavilion. This marks So Ray.
We were a party of three. My fourteen-year-old daughter and her nineteen-year-old cousin were joining me. We set out from our beach front hotel, deciding to walk the two kilometres along a quiet country lane to the base of So Ray. Whilst this was a day to be close to nature, you cannot escape Con Dao’s grim past as a penal colony. On the outskirts of town, we passed what was â€˜The Cow Shedâ€™. As it name implies, in this prison, inmates were treated like animals. Just across the way, there is a sign with explanation in Vietnamese and English, marking the place of execution of prisoners, including twenty-two buried alive after a mass break out.
But soon, we were in the country, passing grazing brown cows and lakes covered with blooming red lotus flowers. We visited the National Park Headquarters Visitors Centre, which has an excellent exhibition on the fauna to be found on Con Dao, including a rare Dugong (Sea Cow), preserved in formaldehyde in a tank. Then, back on the road, there were glimpses of the endemic Con Dao black squirrel frolicking in the trees.
We reached the base of the track up to So Ray and there had been changes since I made my two previous ascents. On the positive side, you can now climb up directly after having had breakfast. A bright sparklingly clean villa has been converted into the So Ray Guest House. Less happily, the sign board which previously had announced the British Petroleum-sponsored So Ray project had changed. This project was designed to save rare species of flora after the havoc wreaked by Typhoon Linda in 1997, which destroyed swathes of the jungle. The sign now threatened â€˜No Ticket, No Entryâ€™. I had been unaware that this was considered part of the National Park. If you want a walk up a jungle pathway, there are plenty of places to have this experience without paying. On the other hand, contributing to the upkeep of Con Dao’s natural beauty is a noble act. We would have been willing to buy our tickets, but there was no one there to get them from and we were not going back to the Headquarters on foot to do so. So we just carried on regardless.
I would not advise going up if it has been raining. It will be more slippery and the first section will turn into a stream. It was under such conditions when I walked up the second time. That time I was lucky and I was amazed to see, so far from the beach, a large crab. In those days, information was hard to come by, but this time I had noted in the Visitor centre that there are two species of forest crab on Con Dao.
Justification for charging for the climb could be the four boards along the way that give information. One, for example, explains that trees that grow on mountains have long roots that lie shallow in the soil so as to anchor them well. Certainly some of these huge roots provided seats for rest stops. Another explains that you are in the richest biome on the planet. This may be so, but one tree looks just like another and you will hear a variety of bird chatter but the feathered friends are pretty good at hiding themselves. The most common sight is skinks basking on rocks. I tried to photograph these beautiful creatures with their golden backs and bluish tails, but they always shot off at the last moment. One jungle sound that I enjoy is that of the Tokay lizard – tac ke, tac ke is the cry that gives it its onomatopoeic Vietnamese name.
Basically, this walk is like going up a tube of greenery. You almost feel as if you are wearing the jungle. There are no views. You are simply enveloped by nature. The way is steep and winding. I found it heavy on the legs and the girls, too unused to any kind of walking, had to rest frequently. Suddenly, light comes shining through above you and you know, thankfully, you are near the top. At this point, we heard the whooping of monkeys. I had met them on my first visit. They had come out to meet me at this point. I was hoping this time they would keep their distance.
We had a long rest and finished drinking our water on seats around a picnic table at the top. Then we walked along a path and climbed steps up to the balcony of the pavilion. Our forty-minute climb was rewarded by superb views of the town below and seven of the archipelago’s islands gleaming in the azure ocean.

Basically, this walk is like going up a tube of greenery.
You almost feel as if you are wearing the jungle.

Then my daughter cried â€˜a monkey is coming!â€™ Sure enough, a handsomely bearded male was climbing the stairs. I was just wondering why when it grabbed a plastic bag we had left in the corner of the balcony. There was nothing in it but fruit, empty plastic bottles and a packet of potato crisps but I felt indignant at having been robbed. After some moments of disbelief, I followed it down to the jungle edge. The monkey inside of me came out as I grunted and grimaced at it, brandishing the hotel umbrella I had been using as a staff for leverage. It fell back and I saw that this was a family of four monkeys. There were Mum, Dad and two kids.
These monkeys have not lost their fear of man, but as I read on the Internet about foolish people bringing bananas up here, they may soon do so. I found my bag. It seems the monkey had made the same poor dietary choice as some people did .He left the fruit and gobbled up the crisps. These monkeys are unique to Con Dao. They are one of ten sub species of Long Tailed Macaques. Another name for them is the Crab Eating Macaque, though this now should be changed to Poca Eating. Another name is even more curious. It is Cynomolgous Monkey, which means â€˜dog milkerâ€™. I learned that they have been on Con Dao a long time. Eighteen million years in fact!
I advised the youngsters that whilst going down was going to be lot less exhausting, they needed to be very careful. Whilst I managed to keep upright, my daughter did slip a couple of times. Once back on the road, I decided to walk back the other way and make a circular route back. But it was too much for the girls, so we stopped at a cafe. We took much-needed refreshment and called for a taxi. We arrived back at the hotel having worked up a very good appetite for lunch.
I can highly recommend to you this half-day walk on your list of things to do on Con Dao. Please respect nature if you do, especially leaving the monkeys well alone and buy your ticket before. You may not be as lucky as we were. Happy trekking!