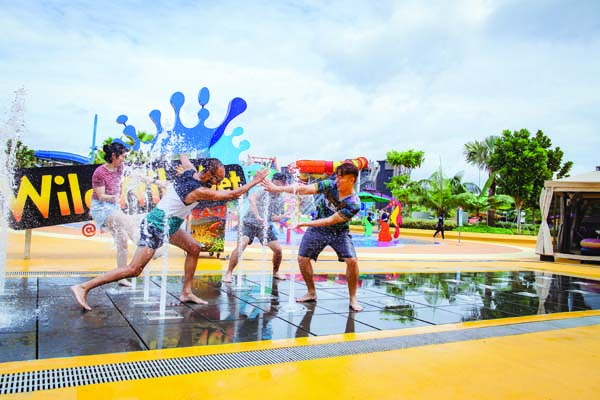 A culture built for working people

Downtown East is a special thing.  As a business run by the National Trades Union Congress, it can exist and be successful only in Singapore. It was certainly the first time I have seen such a thing in my life, and it will remain unique, for a long time. It is a vibrant, purely Singaporean phenomenon.
The evening of Nov 10, 2018 masses of people gathered to celebrate its 30th anniversary. Ng Chee Meng, NTUC Club Chairman and NTUC Secretary-General projected what it will be like in 30 years , embracing technology revolution as an opportunity, not a threat.
Because Downtown Eastâ€™s main purpose is to serve the working folks of Singapore, it is hardly known outside of that country. There is hardly a Chinese or Indian, or Vietnamese or Indonesian etc. who knows about Downtown East. Neither did I.
Located in the middle of Pasir Ris Street, the very green Downtown East is surrounded by 10-15 storey blocks of low-cost residential housing of a large Eastern area of Singapore, where local working people can buy a housing unit and have to pay only 40% of the cost, the other 60% covered by the government. The first impression Downtown East makes is that it is very spacious. Of course, it has to be so in order to host working masses in special occasions.
Secondly, it has everything a person needs. So, anyone that has some money can live in the compound all year round without going out. Downtown East has a resort called D-resort; a water park called Wild Wild Wet; an enhanced retail, dining and entertainment mix at Market Square that includes a kind of food court with a lot of tidy, small restaurants, a row of shops where one can buy almost everything a tenant may need, a modern child care center and even a bowling alley; and a high-capacity MICE facility for corporate and consumer events known as MUCE. All the foods and goods sold here are of good quality at very reasonable prices. In fact, there are people who make it home here for long periods of time. During my stay at D-resort, many BBQ parties were going on around all day. The resort management explained to me that people could book a place and bring their stuff to the resort ground to have a good time.
In addition, two years ago the Singaporean government invested 200 million dollars to renovate the facility.The D-resort part looks like a village with large communal houses surrounded by stilted houses, all connected by roofed walk paths. The newly built rooms are beautiful, comfortable and of top quality. Room service is friendly yet discreet. Singaporeans seem to use the resort as their own country retreat house.
The investment was also used to expand the Wild Wild Wet water park with new exciting rides: Royal Flush, Free Fall, Vortex – Singaporeâ€™s first high-speed 360Â° loops ride and Kraken Racers – Singaporeâ€™s first four-lane mat racer slide. Furthermore a Kid-zone and Cabana service have also opened recently. D-resort and Wild Wild Wet combined became Singaporeâ€™s first Integrated Water Park Resort. Again, as I observe them, Singaporeans seem to have fun in the water park as if it is in their own back yard.
I wonâ€™t be surprised if told that Downtown East is not only great but also profitable. They have recorded an average of 1.1 million guests monthly. Events and programs are organized all year round to facilitate engagement and building of bonds with members and guests. These events are free for guests to enjoy, or at an affordable fee to encourage membersâ€™ participation.
This month they have celebrated the 30th anniversary of the facility with a day of music, food and carnival fun. Now I learned that they call Downtown East their lifestyle destination. It is not a service, or a privilege offered to working people. On that day they even had a race in which 98 teams took part. The event, called Downtown East 30, features star-studded local musicians and bands including the likes of The Sam Willows and THELIONCITYBOY, yummy treats at the food bazaar, fun attractions at the carnival, and engaging activities at the Community Village.
The hosts displayed professionalism and great style and care. The facility and the people have convinced me that â€œBuild on trust, build to lastâ€ was not only their slogan but their lifestyle too.
I can see that Mr. Lee Kuan Yewâ€™s legacy is alive and well. His vision and spirit that have made Singapore what it is today can be felt most vividly in the Downtown East.