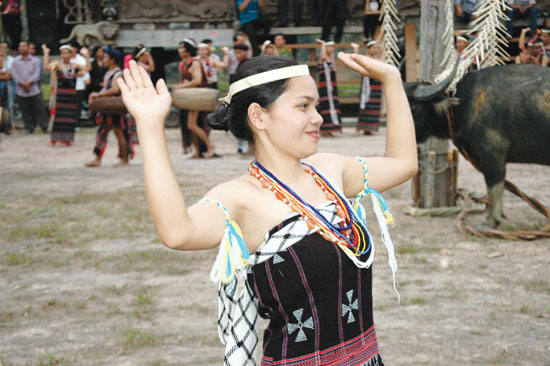 All Co Tu men and women love to adorn themselves. The Co Tu traditional necklaces were very rich and diverse in materials; agate, glass, metals, stones, shells and horns. Nowadays, because of the changes and influences from outside, the Co Tu necklaces are not so rich. Most Co Tu necklaces today are made of only agate, glasses and plastics.

The necklaces most beloved by the Co Tu were made of agate beads. One can see at any Co Tu festive occasion men and women with an agate necklace. Archaeological excavations show that the Co Tu people of the Quang Nam Mountains learned to adorn themselves with agate beads quite early. Since agate is beautiful, colourful and durable, they were passed down through thousands of years.

To the Co Tu, agate is the most valuable among their jewellery. Blood-red agate beads are the most favoured by Co Tu men and women. Agate is also a must among Co Tu betrothal gifts.
Beside agate, glass is also a popular material with which to make Co Tu necklaces. They love it because it’s beautiful and can produce desirable light effects. The preferable ones include transparent, opaque, blue, dark blue, green, brown, orange, plum and ash-grey.
Beside agate and glass necklaces today, the Co Tu also love to wear necklaces with plastic beads. They used to use all sorts of materials found in the forests to make beads, but nowadays, they buy plastic beads available in the market to adorn their appearance. These are very similar to the white ones that the Co Tu attach to their brocade dresses, but much more colourful and very cheap, so some even wear a dozen necklaces of many colours-blue, black, red, yellow and white. Co Tu folks love best the white plastic bead necklaces, because these suit the colour of their brocade ornaments.
If during the festive times you happen to be in the areas where The Co Tus live, you would be impressed by the image of graceful and tender young Co Tu girls in their traditional brocade dresses, with a dozen necklaces made of agate, glass, plastics that shine all the lovely colours of the world on their necks. The necklaces never leave the Co Tu women. They add a unique, alluring, glowing charm to everything they wear, do and say.n