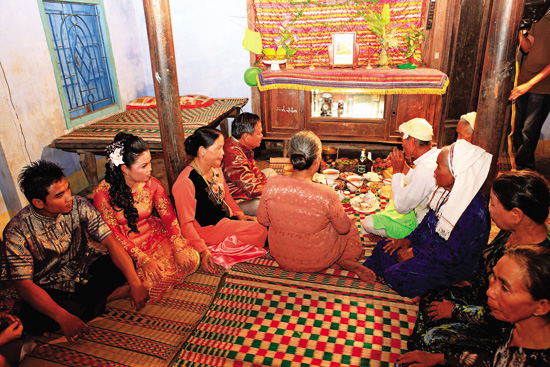 Pictures: Cham ceremonies, in the bride’s house, left, and, during the receiving of the groom, right. Photos: Inrasara

Vietnam Heritage, November-December 2011 — The Cham people of today are matriarchal, so women propose to men and men live in their wives’ houses. It is the other way round for Kinh Vietnamese.
Even as recently at 1928 it was the man who proposed in Cham marriage. In the book Le Royaume du Cham (The Cham Kingdom) (Paris, 1928), French author G. Maspéro wrote, ‘Cham people’s marriages are arranged with the help of a broker who brings some gold, silver and two jars of wine to the woman’s house to propose marriage.’
Weddings of Vietnam’s Cham people, most of whom now live in southern central province of Ninh Thuan, are usually organized in the third, sixth, tenth and eleventh months of the Cham 12-month calendar, which is a month behind the Vietnamese lunar calendar.
The Cham people belong to three main religions, Brahmanism, Islam and Banism, and marriages between religions are forbidden.
Today, if the man – today it is the man who receives the proposal – agrees, the man’s and woman’s families choose the day.
The man and his guests go the woman’s house.
Everyone gets together, eats, drinks, sings and dances. The broker takes the groom to the bride, gets them to hold hands and says wishes.
Among Brahmanist or Banist Cham, a broker from a woman’s family goes to make a proposal to a man. The broker usually says, ‘Go and find a good buffalo for a crop.’ Offerings are simple – cakes and fruit.
If everything goes well, there is a second event, with simple offerings like betel leaves and betel nuts, wine, cakes, fruit and especially the ray fish, a symbol for a lot of children. This event is confirmation and agreement to organise a wedding.
There is another event when representatives of the two families decide on the date of the wedding and number of participants. Things cannot be changed after this event.
The Cham have three births, their wedding being the second (the first is one’s appearance on earth and third when one dies).
Godparents, who must be people who do not have a broken marriage, are as old as betrothed’s parents and  know tradition, complete preparations.
All events happen in a space of several days to three months.
On the wedding day, the groom’s family prepares simple offerings. About 2 p.m. to 3 p.m., the groom’s godfather and people on the groom’s side go to the bride’s family. The bride’s family receives them at the village’s entrance.
At the bride’s house, the groom is taken into the bride’s room, and they exchange betel leaves and betel nuts, and the groom gives a dress to the bride.
After this event, the groom’s parents meet the bride’s broker. They all have a party at the bride’s family’s place, and the groom’s and bride’s godparents pray at a tray of offerings to wish the new couple happiness. They talk for a while about leaving the groom at the bride’s family’s place before returning home.
In the marital bedroom, a candle on a wooden tray must burn continuously for three nights as a way of separating the groom and the bride. They can have sex only after the candle and the tray have been removed from the room.
Two days after the wedding, the bride’s family goes to the groom’s family and brings the groom’s clothes to his wife’s family; and they officially become husband and wife.
If they are poor, they may organise their wedding secretly. They choose a good day for their wedding, then on the fourth evening, some people from the groom’s family take him to the bride’s family.
When a couple has had one child, the couple, together with the bride’s family, go to the groom’s family to offer cakes, chicken eggs, wine and candles, mainly to apologise for mistakes that have offended the groom’s family during the time the couple have been together.
It may be rare, but if the man returns to his parents because of disagreement with the wife’s family, the woman’s family must arrange a similar apology event to say sorry and take the man back.
In the case of divorce, both families gather, cut a chopstick in two and keep each one part. In divorce, a Cham man leaves all the property to his wife so she can bring up the children, none of whom does he take with him.

*Inrasara is a Cham and well known expert on Cham culture